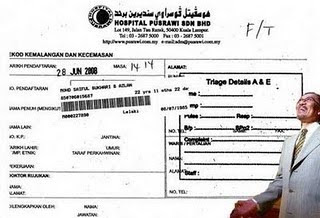 Saiful Bukhari revealed in court this morning that he did not undergo any examination with Dr Mohd Osman Abd Hamid at Pusat Rawatan Islam as claimed by Raja Petra Kamaruddin in Malaysia Today few weeks after the June 2008 incident.

Saiful described in court that he was asked by Dr Osman to put back on his pants and go to Government Hospital since it is only there where criminal cases are handled. There were no examination done.

In his posting on Malaysia Today back in 2008, Raja Petra made the claim that Dr Osman had examined Saiful and his report shows no physical evidence of any penetration.

This lie based on a falsified document had been repeatedly used by Anwar, PKR and PR leaders in their Ceramah and blog writings. The defense had used this falsified evidence as their argument in court to apply for dismissal of the case.

Below are the falsified medical reports:

Raja Petra had reproduced the medical report later with notes for mass distribution, below: 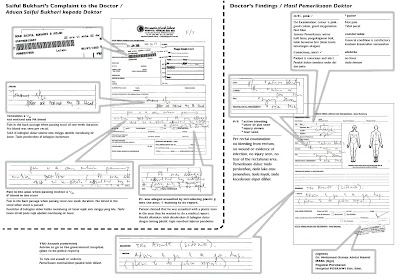 Karpal Singh had submitted the following medical report from Dr Osman in his opening address to dispell of any evidence of penetration, below: 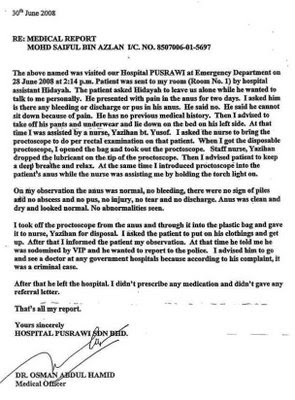 What a mess they are in.

When the report was produced by Raja Petra, Dr Hasan Novandri of blog Minda Intelek had exa mined the report and raised doubts. In his blog posting dated July 30, 2008 here and other dates, Novandri questioned the diagnosis TRO used in the Medical Report as not the right procedure for sodomy cases.

There were also other obvious weakness with the report.

As far as criminal cases, the court will only use reports produced by Government Hospital. Specifically for this case, the hospital report used by the court is that produced by Hospital Kuala Lumpur where Saiful had went.

In his opening statement on Wednesay, Deputy Public Prosecutor, Datuk Mohamed Yusof Zainal Abiden was reported by The Star below:

"The prosecution says they will establish the sodomy charge against Anwar beyond reasonable doubt. They contend that they will prove the case from direct evidence from Mohd Saiful and forensic testimony from doctors and chemists."

What do they mean by direct evidence? Does it mean there is a medical physical evidence to be produced by HKL? Let's get our imagination wild, perhaps there is a video evidence.

All this while, blog followers have been lead to believe that there are only forensic evidence in the form of Anwar's DNA extracted from Saiful's anus.

Anwar claimed he has some 13 alibi witnesses, but he still need to explain his DNA found in Saiful's buttock. Conspiracy? Malicious allegation? Fabrication? Those are old tricks. He better do more than that.

Does it really exist 13 alibis? Do they know the punishment for perjury is imprisonment?

Video evidence? Gosh... no wonder why Anwar asking for prosecution to supply him with advance evidence b4 trial proper.

The thing is, they will play out that Doc has been neutralized, forced by police to retract his examination report etc etc. You can expect this spin from RPK to cover up their mess

Now you show how stupid and shallow your understanding of a medical report is. This report is genuine, the mro number confirms it.
if u have read half the reports in hkl u will see a lot of rubbish written. tro sodomy is stupid but the repot is genuine. once a patient is infront of u u have to examine. its medico legal u stupid moron
ok now u can censor my comment u twat!

I am sure you can say your opinion without calling me stupid.

Did you know that report was invalid in term of proceudure as stated by one doctor Dr Novandri?

Did you know the only admissable medical report for criminal cases is the one from government hospital?

Did you read Saiful's court statement which until disputed by Karpal will be a case evidence?

Tempting to call you stuid for being factually inept, but that's beneath me.

Just state you points politely and others will give your opinion a fair hearing. Otherwise it is trash. Thats why I will not release opinion said in a trashy way.

No, no, no, no.
The question is whether the report is genuine or fake. Furthermore, where on earth does it require gaining consent to look at the anus ass. It does not. Consent is for things like invasive procedure. Imagine if you go to hispital, doctor must consent for everyting. Open your mouth stick a thermometer get consent.

U IS ASKING THE STUPID SAYFOL TO DIFFERENTIATE BETWEEN INVESTIGATION AND PROCEDURE. HE IS STUPID BOY NOT KNOW THAT SAY CIFUT MEANS HE CAN RUN FAR FAR AWAY

Read knowingly and stop being misled.

Simple simple simple.
You are insulting the credbility of the medico legal profession and lying as usual.

Worse you saying that RPK is lying HE NO LYING he tell truth.

this BLOG many many LIES AND NEVER GIVE CHANCE SPEAK TRUTH! A LOT LIES ONLY!

SORRY FOR ANGRY TALK, U IS NO GOOD TO MALAYSIA!