1MDB on course to reduce debt to manageable level 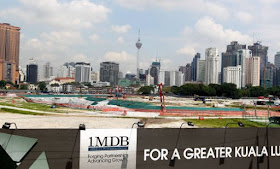 1MDB is on course to reduce their borrowing to a more manageable level with their latest announcement to sell 54,250 sq ft of TRX land for Affin Bank Berhad's future headquarter in the Kuala Lumpur Financial District.

Despite recycled accusation, it is understood that 1MDB intend to keep borrowing at the more manageable level of RM10-15 billion.

Just like Tabung Haji, there is a common Director between 1MDB and Affin Bank. 1MDB's Chairman, Tan Sri Lodin Wok Kamaruddin is a non-executive Director of Affin Bank and Cheif Executive of LTAT.

Hopefully there is no more headline chasing blog posting to accuse the deal as a bailout using the armed forces pension fund. Political oversimplification were made with inadequate understanding of property market.

The bad publicity created on Tabung Haji had scared local corporations and funds away while foreigners gobbled up land parcels for Stage 1 of the TRX. [Read Property Lifestyle here.]

The New Straits Times below:

The plot, earmarked for a 35-storey Prime Grade A office block, will bring the Affin Group’s financial services entities to co-locate under one roof and cater for the Group’s future expansion plans.

Affin Bank’s new head office would be part of TRX’s financial quarter, essentially the Central Business District of TRX that occupies the most visible corner of the site, fronting both Jalan Tun Razak and Jalan Sultan Ismail.

“We are pleased with the progress we are making in our negotiations with local and international parties, and we are happy to have Affin Bank with us as we continue to realise our aspirations to create a world-class financial district," said 1MDB RE CEO Datuk Azmar Talib in a statement.

The Sale and Purchase agreement was signed following extensive negotiations that began in 2012, and it covers the development rights to build a commercial tower for a consideration of RM255 million.

The development will have a Gross Floor Area (GFA) of 823,439 sq ft, with the price per sq ft GFA of approximately RM310.

Affin Bank’s new head office has an attractive plot ratio of 15.2, while the entire TRX district – which will boast an urban central park and amenities such as on-site water treatment system and district cooling plant – has a plot ratio of 6.8.

At a separate press conference, meanwhile, Affin Bank managing director and chief executive officer (CEO) Kamarul Ariffin Mohd Jamil said: “We have been sourcing for a suitable location that meets our requirement, with the right price. There was a need as the bank, together with other entities within Affin Group, has been growing and we need more space for everyone under one roof.”

He added that the land has been independently valued at RM261 million. Kamarul Ariffin said Affin will pay 10 per cent deposit for the acquisition and the remaining 90 per cent upon presentation of the registration title.

Noticeable is the payment terms are similar to that of Tabung Haji but was psyched as a bad deal and bailout.

The claim of bailout is unfair because Affin Bank have been in negotiations with TRX since 2012. So it is not a rushed deal that would be typical of any bailout.

Affin is one of the many local financial institution thus is a suitable occupant for KLFD.

As explained in the case of Tabung Haji, the same practises applies. Lodin had abstained from taking part in the decision making process and the consideration to buy were professionally done.

Other nearby lands are getting only plot ratios of between 8-10.

TRX land are better deals despite the impression of TRX land are commanding higher price than the surrounding site. That is not quite true. The German embassy land was purchased by MRCB at RM3,100 psf.

The Master builder will be responsible to provide site-wide infrastructure including transport connectivity, water management, district cooling and a sizeable public realm.

One of TRX’s USP is the ease of doing business as it aims to create a business ecosystem within TRX for ease and convenience, access to larger pool of talents, close proximity to customers and suppliers, and opportunities for peer networking

The point is this is a business deal and it should be seen strictly from a business perspective. There are places and time for politics elsewhere.

In the meanwhile, 1MDB is responding to recycled allegations againt them:

Tun Dr. Mahathir Mohamad in his latest blog posting today recycled old and unproven allegations, which have been addressed by 1MDB in various statements shared with the media.

On 30 June 2015, in our response to one of Tun Mahathir’s postings, 1MDB have provided a detailed explanation on the flow of funds from our investment in the joint venture with PetroSaudi International.

We have also explained, on several occasions, our rationale for the price we paid in the acquisition of our energy assets. As we had explained in our statement dated 30 June 2015, 1MDB believe that the value we paid for these assets - which may have involved a premium in certain instances, as is common when acquiring another business - is commensurate with their existing and future potential.

These recycled allegations not only cast aspersions on 1MDB but also impacts the day-to-day operations of the company. 1MDB have repeatedly responded to these unfounded allegations by Tun Mahathir as evidenced in our statements on 10, 16, 18 and 30 June 2015.

1MDB would now like to remain focused on the successful implementation of our rationalisation plan, which was presented to the Cabinet on 29 May 2015.

Since then, 1MDB has been making good progress, beginning with the repayment of a US$975 million (approx. RM3.6 billion) loan and execution of a binding term sheet with International Petroleum Investment Company (IPIC) that will ultimately result in the reduction of approximately RM16 billion of the company’s debt.

We have also appointed an independent real estate consultant for monetisation of the company’s land parcels in Bandar Malaysia, Air Itam and Pulau Indah.

With regards to Bandar Malaysia, 1MDB have received expressions of interest from 40 local and international parties to be development partners for our 486-acre Bandar Malaysia project, who are now in a detailed due diligence process.

1MDB is also now in due diligence with shortlisted local and international parties in relation to a sale of our investment in Edra Global Energy Berhad.