Indecision and overkill of MACC

This indecision's buggin' me
If you don't want me, set me free
Exactly whom I'm supposed to be

Unless new fact arise, one should never change course on a decision made. Sometimes it is better to make a wrong decision than the more crippling indecision. This is the lesson from the events involving MACC recently.

The 1MDB was not answered and explained with sufficient clarity and due process was only to begin in early August but someone diverted away from the low lying fruit.

While events after Hari Raya may have taken away public attention away, there will always be the likes of Tun Dr Mahathir to remind of 1MDB as he did in his latest posting here. Luckily, Arul Kanda did his part and is due to appear on TV3's Soal Jawab tonight at 11 PM.

The diversion by someone up there was to focus on Xavier Justo blackmail and leakage but indecision and overkill on MACC only made the public to focus on the RM2.6 billion fund allegedly deposited into Dato Najib's personal account.

The flip flop to stop the investigation on MACC and reverse the transfer in haste of two MACC Directors only put Najib in a bad light. 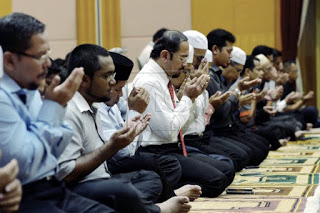 In a moment of indecision, act quickly and try to make the first step, even if it seems unnecessary.

Days before Hari Raya, mainstream media was focused on the arrest of Xavier Justo.

Subsequently, it led to the allegation of information tampering and leakage of confidential information, probably investigation material to Sarawak Report, The Edge and Wall Street Journal [read past posting here].

It was SR's response to leak Datin Seri Rosmah's personal bank account transactions that was a dead giveaway. It was an investigation paper and not fake bank account as spinned by pro-UMNO cybertroopers. SR was not protecting their source.

The RM2 million deposited into Rosmah's bank account was made close to the date of her daughter's wedding and it led many to believe it was wedding expenses. The amount is a non-issue to urbanites used to see million dollar wedding splash but it created a buzz over Raya in the rural constituents.

That error by SR was the basis to halt due process and investigate the leakage first. Otherwise, public accessibility to wrong information will negate any investigation finding.

Illegally obtained information are not admissable in court and the Whistleblower Act provides no protection. The use of Xavier Justo provided information could be thrown out of court. Some of the critics and opposition have not been thinking thoroughly.

There is a Penal Code 204 for the offense of giving false information. It means the problem of leakage must be taken seriously. What could be seen is that the illegally obtained information is only useful in the court of public opinion to bring down governments.

So it was seen as necessary to preserve democrasy and public institutions. Actions were taken to block SR, suspend The Edge publication, and pursue suspects of leakage.

The natural suspect for leakage of investigation material was Bank Negara Malaysia and MACC. However, thus far only MACC was investigated by police. But the timing to rollout the leakage investigation was bad. Take a look at the chronology below:


March 6: The special taskforce of police, MACC, Central Bank and Attorney General Office to investigate the allegations of improprietary of 1MDB formed.

July 1: Deputy Commissioner of MACC,  Datuk Seri Shukri Abdul left for the US.

July 29: The 5-member independent panel to monitor MACC made joint statement requesting the Special Taskforce given space to carry out investigation without fear of intervention by interested party. The integrity of MACC as an independent body should be defended and no compromise to interested parties.

July 30: MACC denied it's senior officers are involved in a conspiracy to topple the government. Their actions are made as officers of MACC.

August 3: In a media statement, MACC informed that the RM2.6 bilion allegedly deposited into Dato Najib's personal account was from donation and not from 1MDB.

Police took statement from MACC Director for Special Operation, Datuk Bahri Mohamad Zin. After giving his statement, he made the "ini perkara gila" remark to the press dan stated he had no involvement in any leakage.

August 4: More than 100 MACC staff and officers held a solat hajat at the MACC Administrative Building in Putrajaya.

MACC gave a statement that they will be seeking explanation from Dato Najib with regard to the RM2.6 billion transfer from Middle East donors. However, no name was mentioned.

MACC explained AG allowed them to make statement on August 3 without involving Special Taskforce because it was agreed that each agency will be undertaking investigation separately in accordance to the assigned areas.

August 7: Abu Kassim undergone surgery in the morning at a Kuala Lumpur hospital.

Deputy Commissioner Datuk Seri Shukri Abdull made statement that he should replace them as they acted under his order.

Shukri arrived at KLIA after 10 days in the US.

The decision made on MACC may not involved Najib but ultimately, he gets the blame.

That got one pro-Najib blog, Gelagat Anwar [read here] furious as he blamed the Chief Secretary and Principal Private Secretary to the PM for being excessive to please Najib. The blogger may have sense that public was building up suspicion to the decision to reshuffle cabinet  and surprise appointment of new Attorney General and Director of Special Branch.

By the time, a Director and seven officers were apprehended by police for investigation and subsequently two Directors transferred out, the leakage play was already an overkill.

Rumour from the overkill 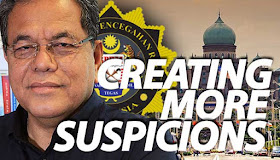 “Things can harden meaningfully in the moment of indecision.”

The overkill was someone up there's own doing.

There were rumours being spread of Tan Sri Muhyiddin behind a conspiracy to gather BN MPs votes  to support opposition's initiative for a vote of no confidence against PM. History of Muhyiddin's political career does not make such conspiracy sensible.

Perhaps, murmurs of Muhyiddin's lower level operators working to gather support for leadership challenge was heard. However, not only there was no confirmation, there was no inkling from his inner circle. Since UMNO party election is delayed for 18 months, it is water under the bridge. A non-issue!

There was also suspicious allegations made by newly established blogs that had sponsor to promote on Facebook accusing Tan Sri Zeti of several side deals. At about the time, Gani Patail was terminated, the rumour was Zeti had tendered resignation.

The reversal by Chief Secretary shows indecision and such indecision bring out the suspicion of fear. IGP decision also flip flop to postphone investigation on the leakage to another date. So it is Najib that end up getting blamed for the flip flop and it made the public more suspicious of him.

The indecision encouraged speculations and rumours, even within the UMNO circle. One such rumour that is widely heard was that Najib was due to be arrested and SR's fake warrant of arrest was said to be real. It is also rumoured that the RM2.6 billion had a money trail to 1MDB.

IGP or some member in the briefed 5-member independent panel was said to have leaked the planned arrest to Najib and he had to decide swiftly and drastically to save himself. The planned arrest was to be done within a matter of days if not for AG's sudden termination.

The rumour made no sense because it was MACC that made a police report on August 3 to deny the allegation of leakage. This was the argument by pro-UMNO bloggers to defend the police to raid and MACC should not be above the law too.

SR revealed warrant of arrest was debunked in a past posting here. The format of the fake document does not look like a warrant of arrest. INvestigation was still ongoing. In fact, it i sheard that MACC will question Najib next week.

But public tend to be believe there is always a cover-up happening thus such rumours are believed instantly without pondering whether it is logical or not.

Is it logical for any government enforcement agencies in the world to arrest current national leader still in power and office? Out of office is seldom heard of but not when still in office. If it is true, the then AG and MACC must be really lacking in creativity.

The official line is MACC is in charge of SRC investigation, so why would they be the one to prepare the warrant of arrest of PM on charges of money laundering?

By the way, one online reporter claimed PM will not be arrested for money laundering but offense related to SRC. Then again, MACC has yet to get Najib's statement.

Talk of leakage by enforcement agencies had been making it's rounds since the day WSJ made their allegation on Najib.

Before MACC, the first to get blamed was Bank Negara investigators. Only Bank Negara could draw up such money trail and complete account information. So it is no surprise that three BNM officials was the earliest to be accused.

Police poor timing should not be the basis to wrongfully accuse them of abusing power. Not unlike certain other enforcement agencies, police are fairly spot-on in their arrest of suspects. They have a more than 100-year of system in place and an effective intelligence.

Other enforcement agencies are handicap by the law. They had to do extra effort in squeezing out information from suspect and this sometime backfire. Public common complain is that their arrest seldom stick but the publicity is detrimental.

Such agency had to resort to to such method since they are limited in their effectiveness due to requirement of the law place a heavy burden of proof on enforcement. 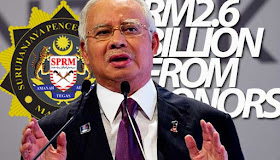 While police were doing the raids, the images of tic-for-tac MACC raid on police officers viraled. It gives the impression of a PDRM vs MACC agency war.

Former AG, Tan Sri Abu Talib Osman was more serious his comment [read The Star here]. The Chief Secretary and DG for PSD as obstructed the MACC at work as per the Penal Code 186.


With much attention drawn towards the RM2.6 billion transfer controversy and the rumour being conjured up, Najib should not hold out on the identity of the donor any longer.

Diverting political pressure to DAP and PKR to reveal their source of funding serve only to buy time. But it only worsen public confidence.

Najib should respond fast and not allow SR to set the rumour machine in motion with their guesses which already include Khadem Al Qubaisi, Mohamed Badawy Al Husseiny and who else. According to a former Malaysian banker in the Middle Easy, their guesses are doubtful.

Unless Najib does so, the public is not likely to believe an Arab could be so generous to donate US$700 million and into a personal account. MACC denial or repeating clarification that Good Star Limited status as Petrosaudi subsidiary could not gain much ground top deny the money came from 1MDB. The ball is on Najib's court.

With public confidence at a low ebb and trust deficit, Najib and his propaganda machinery should avoid making factual error, spinning and being in-denial in their assessment.

Even an honest effort then by 1MDB to correct factual error in the Unit in a sovereign fund in the BSI Singapore account attracted repeated accusation of lying, what more now?