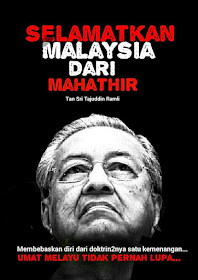 
This time it is the anonymous person making an opinion of Tun Dr Mahathir's vengence on UMNO for his lost in GE 1969 in Kota Setar.

Then a more revealing video on how Mahathir abused government money to help Ananda Krishnan's Maxis to gain entry into Langkawi to take on early entry, Celcom.

The tycoon is facing bankruptcy for his India investment to the tune of US$7 billion and possible request for extradiction to face criminal charges in India.

It is long believed that this long time friend who helped support him in Kuala Lumpur after the 1969 lost is his business partner and proxy.


And the annoymous person was revealed by the forth night:


Last night, more lengthy version of the video of the snoop on Tajuddin Ramli was released:


This video was commented by Facebooker Lim Sian See here in Third Force.

So did Agendadaily here and Utusan.


Having himself revealed, Tajuddin went on the air with an interview to clear matter. He was not apologetic as he revealed on the forced purchase of MAS by Mahathir.

FMT took notice and reported it:


You do not say no to PM: Tycoon in tell all video

Tajuddin message is clear that Mahathir is not good for the country to move forward.

He is corrupted, compulsive in his abuse of power, and filled with vengence in his heart. There is too much wrongdoings to trust he could Selamatkan Malaysia.

His political campaign narrative are defeated but it was never intended so. Mahathir's interest could be to Selamatkan famili, kroni dan proksi.

Sincerely hope Najib could retake all the money he practically looted and plundered from the country's true kleptocrat.

Mahathir is merely playing on perception and sentiment to bring Dato Najib down in his endless serial killing habit of knocking down nation's leaders and insist every leader succumbed to his whims and fancy.

We said enough is enough to Mahathir in early 2015 after giving him a second chance in 2003. Malaysians should do the same.