Time to know the truth about Tabung Haji too 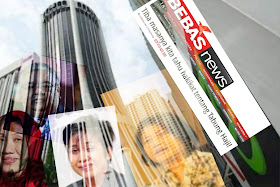 It is most welcoming that BEBASnews.my finally state their position on Tabung Haji (TH) with this piece entitled "Tiba masanya kita tahu hakikat Tabung Haji" (It's time we know the truth of Tabung Haji).

It is written by an unknown Admin and not as melancholic as their earlier piece and also another one to stop politicising, "Cukup-cukuplak jadikan TH bahan politik", both by 24-year economic writer Mowardi Mahmud.


Though agreeable and it's the intention to be specific and technical, Mowardi's argument to seek for evidence is inconsistent.

It was not reflected in any criticism of the media blitz by current management which borders on unlawful practise, used to shame previous management for merely a yet to be substantiated police report.

Dato Zukri and Dato Zaiton Hassan should remember of the police reports they orchestrated in the past which both police and MACC found nothing wrong.

For lack of a better issue to raise and evading documented allegation by Sabahkini2, Mowardi trapped himself to nitpick on this blog for mentioning in passing 'bank run'.

Actually, it was mentioned first by the Pakatan Harapan side, in which Mowardi has convenienty switch side to root for.

The Star team, in support of current government, featured Tabung Haji at end of December prior to passing over RM19.9 billion of TH lucrative assets to Lim Guan Eng-controlled Ministry on December 28, 2018, mentioned 'bank run' in their The Star article on December 11, 2018.

Then Mowardi resorted to the most un-economic argument to imply this blog as bordering on racial politics.

If Lim Guan Eng-controlled Ministry is not a fact, and considered racist, then BEBASnews.my owner, Mahathirist Dato Zaini Hassan has succumbed to DAP-esque political propaganda?

It is obvious and undeniable that BEBASnews.my is the social media mouthpiece of Datin Wan Norhiyati Wan Ibrahim (Yati), personal PR consultant for Dato Zukri and Datok Zaiton.

The latest from them have to be combed throughly. Yati will likely not trust this blog and so do we of corporate public relation, generally.

To quote from a former economic writer for The Mole, Salahuddin bin Hisham in his defense of TH in February 2018, the art of corporate public relation is the art of not telling the truth or bordering on lies:


THERE is no problem with anyone having a cynical or critical attitude towards any announcement coming from government-linked institutions or companies.

It puts these executives on their toes, gives the other side of a story, and uncovers any attempt to cover-up wrongdoing or poor performance. Corporate public relations has a tendency to disclose as little as possible and has made an art of throwing big words to hide any shortcomings.

However, it is preposterous for a senior person to spread false and unsubstantiated accusations in his Facebook of Lembaga Tabung Haji (LTH) operating Ponzi scheme  – somewhat like a Pak Man Telo get-rich quick scheme in the late 1980s through 1990s.

Apparently, few former executives of TH - not the one being allegedly vexatiously litigated - called in and questioned the existence of March 2018 meeting at Cyberjaya claimed by BEBASnews.my.

It is certainly puzzling as it happened before BEBASnews.my existed and current management team joined TH.

Who was feeding a not quite confirmed source?

Another point is BEBASnews.my got their facts wrong.

In November 2018, Minister-in-charge of TH, Dato Dr Jamil Khir mentioned the cost then was RM22,450 and not as wrecklessly presumed by the Admin for the current cost of RM22,900 as well as for the past. 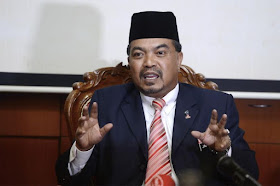 They may refer to this January 28th 2018 article by The Mole, which revealed a 10 year cost history.

Two strikes is not out yet.

True, it is not old news and Salahuddin wrote another piece after GE14, to tell the new government that they will have to deal with the subsidy eventually. He mentioned also the figure of RM22,450 per person.

Dato Zukri, Yati and Empress Dowager should do something to prepare a police report and do media blitz against "Abang" Jamil. Its another petty issue that is an opportunity to shame not only previous management but up to the previous Minister.

BEBASnews.my claimed their source said the subsidy TH will have to bear will be RM400 million a year.

Lets not call it as strike three yet. However, with facts already wrong, it can be a turn-off to read the rest of the official social media piece.

The writer claimed the previous BN government had no political will to tell it like it is.


Apparently, the PH Minister-in-charge, Mujahid Yusof has no political will to say TH will remove the subsidy as per the leaked internal memo by a corporate comm manager.

She would not have issued that memo for all departments to prepare for an upcoming removal of subsidy and higher cost of Haj had there not been a prior clearance or instruction by Mujahid and new management.

Another vexatious litigation in the making?

The BEBASnew.my writer attempted to link the lack of political will to the previous BN government for not facing up the fact that TH could not give out dividend as the asset is below liability level.

The gung-ho manner of the writer somehow is telling as to who wrote it. Nevertheless, he is too much a political writer and not able to get out of it.

Quite sure, he is technically unaware of the latest happening that will prove his argument to be technically wrong.

Where is the impairment?


In fact, the opinion of PWC Excutive Chairman, Dato Faiz Azmi, who is related one of the Empress Dowagers and Deputy President in an NGO to another, based on FRISC 14, that form the basis of BEBASnews.my presumption, is wrong!

EPF has announced a bumper of a dividend. The unqualified accountant and failed economics Finance Minister is in his usual bragging as to how good he is.

The likes of BEBASnew.my will likely chew the same line of political rhetorics as The Malaysian Reserve.

MR is another Mahathirist media who put up Mahathir face in the frontpage for its first issue. BEBASnews.my permanently have Mahathir's face on its masthead as symbol of permanent allegiance.

Naturally, MR claimed it is proof of robust economy.

It is mind boggling that they could provide such dividend if similar impairment policy as TH had to do and forced upon by PWC. EPF claimed equity was main contributor for 2018. 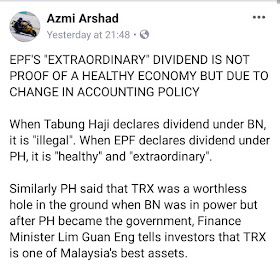 ICAEW holder, former PLC CFO and Facebooker, Azmi Arshad said in his FB that EPF accounting policy does not require impairment. To quote:


Then how did EPF manage to declare the "extraordinary" dividend that "exceeded expectations" despite the adverse economic circumstances, both due to external factors as well as due to PH's mismanagement?

Very simple. Here is another statement in the EPF press release which Lim Guan Eng conveniently failed to mention while bragging about the "extraordinary" dividend:

"... beginning 1 January 2018.... the EPF will NO LONGER RECOGNISE ANY IMPAIRMENT on its listed equity holdings."

Why didn't Lim Guan Eng mention this? Because without this new accounting treatment, EPF would not have been able to declare a "healthy" and "extraordinary" dividend.

Instead he is now claiming credit for a "healthy" and "extraordinary" dividend and ridiculously claiming that it is proof the economy is healthy.

In truth, the "extraordinariness" of the dividend was due to EPF NO LONGER RECOGNISING ANY IMPAIRMENT IN THEIR LISTED EQUITY HOLDINGS.

To tone down Azmi, both practise of EPF and TH was to give out dividend or Hibah based strictly on the performance of the year in question and not current position of their equity for subsequent year.

PETALING JAYA: Lembaga Tabung Haji’s (TH) 2017 financial statements have been overstated mainly because the pilgrims fund did not make impairments on significant decline in value of its investments, a review of its financial position shows.

The fund should be making a RM1.43bil loss in 2017 instead of a RM3.41bil profit as reported in its annual report 2017, according to the review conducted by Pricewa­ter­houseCoopers (PwC).

Impairment is an accounting principle describing a permanent reduction in the value of a company’s assets.

Read on in The Star HERE.

Question: Did Empress Dowager bombed out in her trip to the Auditor General office?


In a prevous posting, BEBASnews.my was warned:


Get specific and technical. Then, "bebas " journalism and freedom of the press is truly towards truth, justice and nationbuilding for alif, ba, ta and not defend a "pencuri, penyamun dan perompak".

There are more from where it came from. Another hint as to not embarass themselves:


Read the Tabung Haji Act 1995 cover to cover, line by line, and not rely totally on what Yati feed you, dummy!