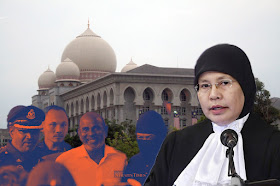 Nazlan Ghazali, the Court of Appeal judge that presided over the SRC case, was one of two High Court judges that acquited and discharged two suspected supporters of terrorist group LTTE in February 2020. There were public outcry over the decision in which prosecution was instructed by then Attorney General, Tommy Thomas to withdrew the case.

Circulating on social media is an alleged letter from Tun Dr Mahathir instructing then Home Minister, Tan Sri Muhyiddin Yassin to do so. It created the perception Nazlan is at Mahathir's beck and call.

Fast forward to March 23rd 2022, opposition voted against renewal of security law, SOSMA. Late arrivals and absentee by the government side caused the renewal rejected. Here on, suspects that could threaten national security cannot be held for investigation for 28 days without charge.

Since abolishment of ISA, the latest decision by Federal Court could visibly worsen security and public safety situation in the country.

The worrying trend is the court's decision to override Parliamentary power to pass law using the basic structure doctrine. From a layman's perspective, it seemed judiciary is encroaching into the realm of the executive branch of government and Parliament in contravention to the separation of power doctrine.

Lawyers obsessed with legality and accurate adherence to the letter of the law generally do not necessarily make for effective administrators, managers and leaders. Chief Justice will definitely not make good police chief and nation's chief executive. 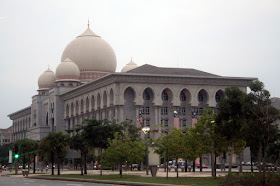 On April 14th, Federal Court made a decision to declare as "void an ouster clause in the Prevention of Crime Act (Poca) that restricts judges from inquiring into the grounds for detention".

This is a significant deviation from previous practise whereby "the High Courts hearing a habeas corpus application could only hear and decide on matters related to the failure to follow procedures by the detaining authorities". [Read on FMT here]

Consequent to this declaration, lawyers expressed the opinion that some "40 Parliament–made laws ousting judicial power to review the decisions of public authorities could be subject to legal challenges following a landmark Federal Court ruling". 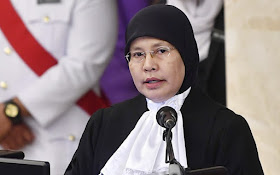 Chief Justice Tengku Maimun Tuan Mat, in her broad grounds, remarked that every legal power must have legal limits and it was for the courts to determine whether such limits were in accordance with the law.

“If the courts are not permitted to decide the perimeters of those powers due to ouster clauses, it will be tantamount to an incursion into judicial power and is therefore violative of separation of powers and the Rule of Law, as espoused in Article 4(1) of the constitution,” she said.

When allowed to challenge ouster clause, judiciary could, for instance, decide against last year's  Emergency proclamation by Agong (on advice of Prime Minister) made under article 150(8) of the Federal Constitution.

Ouster clause was necessary to keep situations under control for public safety. From Wikipedia here, an ouster clause or privative clause is, in countries with common law legal systems, a clause or provision included in a piece of legislation by a legislative body to exclude judicial review of acts and decisions of the executive by stripping the courts of their supervisory judicial function.

Bar Council have been advocating the repeal of ouster clause to challenge Section 15A of the Prevention of Crime Act 1959 (POCA). Federal Court decision is their victory. It served the interest of Bar Council activist as another legal avenue to defend their clients.

Decisions of the executive and parliamentary branch of government could be overridden by judiciary. The Federal Court decision will let loose criminals, terrorists and agent provocateurs. Civil libertarian lawyers will rule and turn the country into further chaos.

According to former member of Bar Council, Lukman Alias in his Facebook here, the Federal Court under Tengku Maimun have been applying the doctrine known in legal circle as basic structure doctrine.

Lukman feared that basic structure doctrine is not clearly defined and no judges have clearly lay down the scope.

The Federal Constitution itself does not explain the basis of the constitution. Neither do laws explain. It is left to the judges to determine. Basic structure doctrine will be arbitrarily determined and left to the fancy of the judges

Federal Constitution has exceptions to even its basic principles in order to incorporate the nation's history and social condition. Liberal judges could interpret according their preferred ideological leaning. 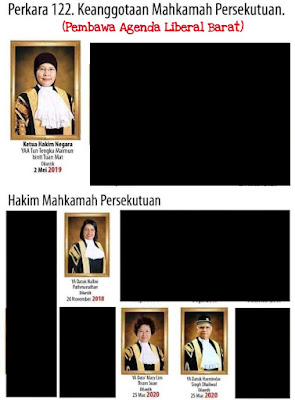 It is the talk within the judicial circle that Tengku Maimun tend to be overwhelmed by Gopal Sri Ram.

She has established a close circle of anti-establishment and liberal Federal Court judges comprising of herself, Dato Nalini, Dato Harminder Singh and Dato Mary Lim.

Nalini is her whisperer, and Gopal Sri Ram and Bar Council are pushing her for President of Court of Appeal. It is widely speculated that Gopal's "that's my boy" Nazlan is groomed to replace Tengku Maimoon.

It explained for her statement to defend Nazlan which was criticised by former CJ Tun Hamid as subjudice and in not stated words, bias.

In court, these judges are visibly pleased when Gopal, Ambiga, Harris Ibrahim, Malek Imtiaz and the ultra liberal lawyers present themselves in their court.

Consciously or unconsciously, these judges are setting dangerous precedents and will make the government powerless with their rulings. It is as though the court has the liberty to pass laws and capable of running the country.

They could slowly weakened the constitutional status of Islam, Bumiputera and Sabah and Sarawak.

From the public security aspect, this trend is disturbing. LUNA's recent plunge in cryptocurrencies will have seriously damaging impact on Securities Commission's crypto-currencies exchange. Crypto have been the safe haven for black money of criminal in Malaysia. With their stash wiped out, be ready for increase in crime.

The liberal inclined Federal Court judges will only be interested in the civil liberty of criminals and Bar Council cartel financial interest than the safety of citizens!