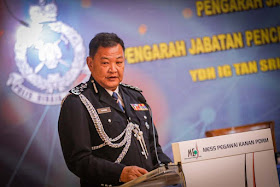 The game behind the latest review in the murder case of Mongolian call girl, Altantuya Shaaribu in 2006 is quite obvious. Hype the SD by the murderer, Azilah Hadri to be shocking enough that the public perception justify for a re-investigation of the murder.

The loud segment of the public will insist on a re-investigation and even the prejudiced lots will judge Dato Najib and Datin Rosmah as already guilty of murder.

This is despite most of them not knowing what went on 13 years ago, never having read the Federal judgement that sentence the two UTK personnel, not aware of Ram Karpal's civil lawsuit for vicarous liability tanking in court, and the case has reached its finality.

The public, being deceived with misinformation, may not realised that C4 was never mentioned in the three courts ever.

By taking the SD overly serious, it will open up a Pandora box for all cases that have reached its finality to be reviewed by merely having any desperate prison inmate make an SD.

When the #KerajaanSepenggal end their term, heard its not too far in the distance, all cases PH buried can be reviewed and re-investigated. No wonder Lim Guan Eng is rather quiet.

Azmin, Latheefa Koya, Sivarasa, and few others have buried a financial scam in Selangor. Comes the time, it can be revisited. 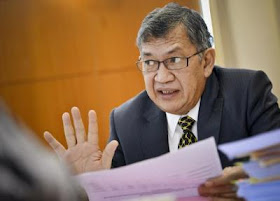 By having said so, he will have to investigate among others, former AG, Tan Sri Gani Patail, former DIG, Tan Sri Nor Rashid, UTK personnals, and many others.

Gani Patail have long been questioned for not putting Musa Safri - the man Najib assigned to assist Abdul Razak Baginda and had introduced Azilah to helped Razak - on the stand. However, Razak was charged for abetting but acquited by the courts. Will Azilah's SD claim be sufficient?

Not to forget, Gani did not appeal the acquital of Razak. In addition, it was Gani, who briefed Pak Lah then that Najib was not involved and subsequently, Pak Lah requested Gani to carryout his work accordingly. Siasat Pak Lah? 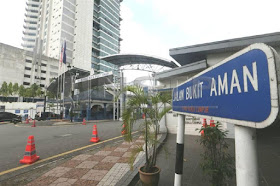 The IGP then was Tan Sri Musa Hassan and he repeatedly denied Najib involvement and still is. Siasat Musa?

Nor Rashid did an investigation early in the year when Ram Karpal started making statement to call for re-investigation and police report made. He had then announced a complete re-investigation was  done and still exonerated Najib. It happened when PH took power. Kasi siasat juga ...?!

For that matter, the former heads and investigators in CID involved with the case in the past 13 years till the re-investigation in early 2019 need to be re-investigated. It means the current DIG, Dato Mazlan, who came from CID, need to interviewed too.

These re-investigation would be precedent setting. Not only Hamid is the first "outsider" (in police, once retired considered outside) hired or rehired to be IGP, it will be another to remember him by when his unprecedented contract expires and due to retires in August 2020.

For that matter, the whole police force need to be re-investigated, UTK in particular. The Head of UTK operation need to re-investigated. The former head of UTK, who brought back the two UTKs from Pakistan and first investigate them, should be siasat.

Police need to siasat the first two IOs and whether they verified on such words as taking care, 'save', 'exhibition', and 'deposit' (close but withheld exact UTK code) and whether there were such rumours of Azilah and Sirul raped Altantuya before "solving" Razak's irritant.

All need done properly. So do AG need to do contempt of courts. Razak's lawyer, Manjeet Singh Dillion called on AG to start proceeding for contempt of court against those making public on statements made on Azilah SD.

Nah .... AG won't do it. He could be investigated for past contempts in the event an SD cropped up on a latter day. 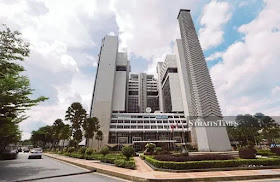 Azilah's SD claim Altantuya was a foreign agent and the order was to exterminate her. If so, why must the order come from from Najib? He was then Minister of Defense, thus assign to police and not to the army snipper team?

Is there no law to allow and cover for such hospitable treatment of threatening foreign agents? Doesn't make sense, right? Never mind, kasi siasat sama MINDEF.

Having recently did a U-turn, due to pressure and resistance from within the police rank, Hamid seemed gullible to a DAP ploy to expedite the implementation of IPCMC. It is due to be voted for second and third seating in the next March Parliament session. 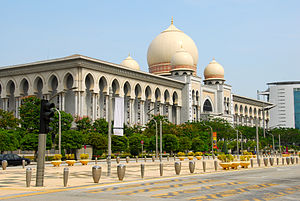 Since Hamid is at it, do not forget to siasat hakim-hakim.

The High Court judge, who made the decision to acquit Razak and found Azilah and Sirul as guilty, need be investigated. So does the Federal Court judges that reverse the decision of Court of Appeal from acquital to guilty in 2005.

COA judges too need be investigated for not acknowledging Altantuya is a consultant, translator conversant in English, French etc and is an expert in defense, law, and finance with the uncanny ability to provide advise on the submarine deal many years after deal was closed, paid for, and fee remitted to Terasasi Limited account in Hong Kong.

She is not the typical model but have the brain that meets the character Mrs Smith as played by Angelina Jolie. 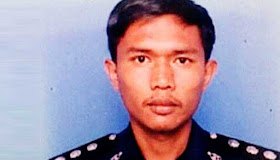 Hamid's swift reaction to call on ten people for interview brought out reaction from a former DPP. No point guessing, there are many former DPPs out there.

The former DPP said Hamid is late and slow on the investigation of Azmin's Sandakan semburit video, but fast on the glaring and obviously politically motivated SDs of Yusof Rawther and Azilah Hadri.

And, he wonder as to from where these witness came from? Who are they? Why no mentioned earlier in the Altantuya criminal trial?

It seemed as though police already recorded Azilah's statement. Is that why Hamid can know, which will be the witness to call on to get statement for the investigation?

Has CID operation turned into a Special Branch-like information gathering operation? This question is valid because police could only start investigation and interview upon issuance of Instruction to Investigate (ITI) from AG.

At this point, Federal Court has only received application for judicial review or as the overly clever press termed it as setting aside Federal Court judgement. It means the court have yet to decide. More so, Federal Court will only convene on this matter in April 2020!

Without a court decision, AG cannot issue the ITI. Since it is a case, in which Federal Court has decided, both Hamid and previously Nor Rashid cannot simply start investigation. Why AG kept quiet on this?

It does not matter there are police reports made. Any ducking cases must have finality. To reopen, only court have power!

The former DPP went further as to boldly ask: are witnesses pre-prepared? Are there pre-prepared investigation points? All points to suspicion of conspiracy.

And Hamid has put the police in harms way and fell to DAP manipulation to subdued the police. Soon criminals will be on board of IPCMC to dictate police and court can't touch them. Deng deng deng dat ... don't touch this!

Jho Low did not turn into a bear 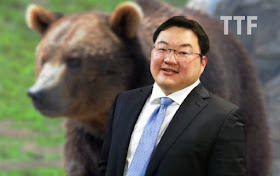 The comforting part in Hamid's PC today was his explanation that his foreign counterpart is not cooperating to enable Jho Low to be brought back to Malaysia, to face justice, which he boastfully claim it will be by year end.

Every other person in Malaysia, saved for Mahathir's diehards and fanatic macai, believed government would not want Jho Low or Nik Faisal back as it would acquit Najib.

Now that Hamid has touched on the subject and confirmed Jho Low did not transformed himself into a bear, or worm or seladang, the public will insist on more details. Which country is it? 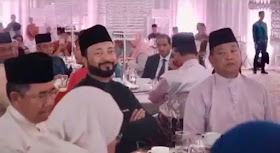 Another question on the mind of many is who was the partner in the Sandakan semburit video?

Haziq has admitted and made an SD. Since police take seriously SDs by Yusof Rawther and Azilah, the Haziq SD should be taken seriously too. He was taken in by police for questioning. Azmin was  not.

Another Haziq surfaced that verified Azmin bought the flight tickets and stayed at the hotel as arranged by a travel agent. Owner is a PKR supporter related to a Mahathir supporter. Azmin has a more than RM300,000 unpaid bill and facing lawsuit in court.

Nevertheless, the video is awaiting for facial recognition by experts in the US. Hamid's DIG promised by year end. Can Hamid remain unbias?

Cybersecurity Malaysia could not do so Hamid has a temporary excuse. Expect police say not enough evidence because the device to record is available.