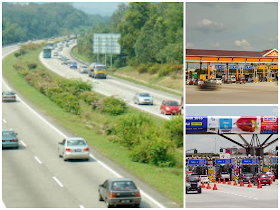 No PLUS for Maju

Almost the same time, Maju Group was back in the news to offer to buy PLUS again.

Having failed before the general election under the Dato Najib and BN administration, Tan Sri Abu Sahid took another shot at it.

Guan Eng expressed his disagreement with Maju's proposal and Mahathir may have reacted to put Guan Eng's highway takeover announcement on hold. He pulled the same GST trick to announce before cabinet decision.

And, Guan Eng seemed adamant to ensure the rejection of Abu's proposal is not U-turned.

At the same time, the battle for the highways may have taken another battlefront in the form of Utusan Malaysia vs The Edge.

Utusan Malaysia may be no match against The Edge on business matter and getting to influence the public.

The paper has limited circulation and strength is politics, UMNO politics that is. But in this battle for highways, they are taking Mahathir side. 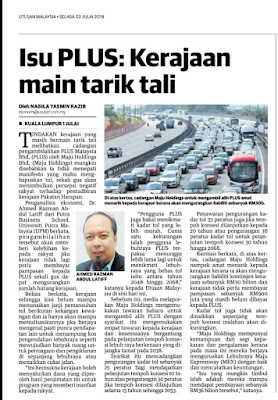 On July 2nd, Utusan published an article arguing that if government is unable to abolish toll roads, the least it could do is accept Maju's proposal which offer government to not pay any more compensation. 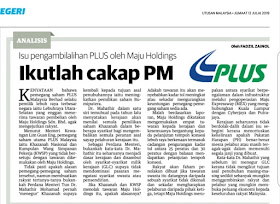 On July 12th, Utusan published an analysis to support Mahathir's decision to review Khazanah Nasional investment portfolio and revert back to its original role. It is the UMNO owned paper arguing for the divestment of PLUS to be given to Maju Group.

Under UMNO, Maju was rejected due to EPF and Khazanah opposition. Initially, Guan Eng said he is waiting for other proposals but used the same excuse to reject the bid.

And The Edge reported: 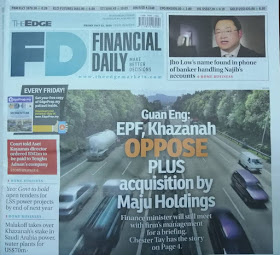 The Edge subsequently followed up with a report on Maju's sukuk bond.

One can safely presume The Edge is convincing its readers that it is right for Guan Eng to reject Maju because their financial situation is not strong enough to buy PLUS.

The first person to raise issue on the takeover of the four concessions was Dato Kadir Jasin, an associate of Daim.

Mahathir had long held the view that it is not feasible to takeover toll concessionaires.
In this case, it is better to let all the toll concession expire. The roads/highways will then be toll free.

The proposed takeover smack similarity with critics against extension of IPP concessions in the various schemes by 1MDB.

However, IPP concession was about to expire asset still useable but existing crony concessionaires like YTL asked to renew/extend concessions with the same term as last time. So cheaper for government to buy rather than extend their concessions or build new power plants.

Ong Kian Meng use the excuse to buy removes temptation to extend concession. Nevertheless, it is not a strong argument.

In support, The Edge reported Guan Eng saying government will issue bond to finance the takeover. 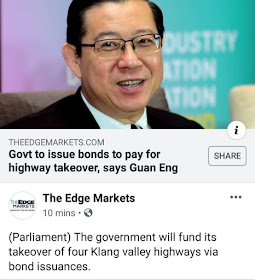 That would only increase government debt instead of reducing past government's accused high debt.

It still did not abolish the promised toll.

Tony Pua's rebutted critics but was shrugged off as talking big but can't even pay the principal amount of RM6.2b. His idea is only enough to service the yearly interest.

The positive words by Tony Pua was seen by Isham Jalil as window dressing.

The suspicion by certain quarters is that Guan Eng was working hands in glove to assist Gamuda to be in a better financial standing than Maju to buy PLUS.

However, it is not quite a Chinese versus Malay cronies competition for a privatisation contract. Gamuda has a Malay partner, a royal one in fact. 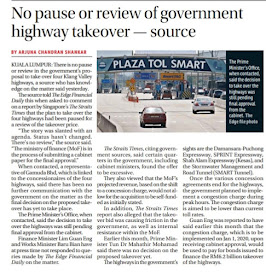 As of today, Guan Eng has not given up in extending his hands for Gamuda as The Edge reported this morning of sources claming government intend to continue with the highway takeover.

Update 2/8 6:00 AM: Again, Mahathir negated Guan Eng to say cabinet has not decided. 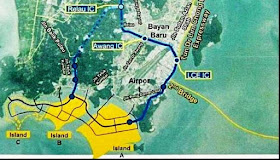 
Some argued that the finance ministry’s projected revenue, backed by congestion charge collection, may not allow for the acquisition to be self-funded as presented currently.

“The whole matter (Gamuda proposal) is on hold pending a full review,” the ST quoted an unnamed minister as saying. The Singaporean daily added that the issue was causing friction within the Pakatan Harapan coalition government.

The same minister said finance minister Lim Guan Eng had presented the plan to the public and made offers for the concessionaires – which are linked to Gamuda Bhd – without the agreement of the cabinet. Gamuda, which is agreeable to the buyout offers, is leading the ambitious RM46 billion Penang Transport Masterplan. Lim was the chief minister of Penang before last year’s general election.

Tightening the "noose" himself or with new set of cronies?

The Penang Transport Masterplan could potentially increase in cost from RM27 billion to RM40 billion. CM Chow Koon Yeow acting strangely to be combative in his support of PTMP.