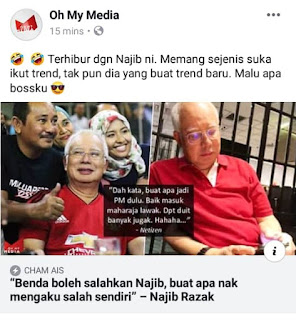 The permutation is endless and funny.


This audio viralling of BFM interview with Penang CM, Chow Koon Yeow can be posed with the same question:


Things can be angry  Why need to answer?

Its an approach to evade question. It only means something is not right ...

Certainly, it must be disappointing for Penangites.

The person prefered to be CM over Lim Guan Eng finally became CM, but beginning to have the evasive, confrontational and arrogant atribtes of Guan Eng. 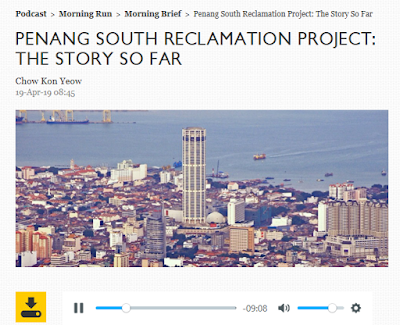 The Morning Run team talks to Chief Minister Chow Kon Yeow about the recently approved Penang South Reclamation (PSR) Project. What were the approval conditions set by the National Physical Planning Council? How will the project be funded? What are the environmental impacts of the projects?

Hear the audio HERE, Chow was evading the hard questions on environment.

Then, he begin to blow up on the interview's mentioned cost at RM46 billion in which he dispute to tell interviewer to get facts right and when explained, he finally agreed RM46 billion include land reclamation.

When asked how it is to be financed, he began to more angry, but hardly any answer.

Then he was asked why focus on island development, he got irritated and claimed the emphasis is on Seberang Prai.

Interviewer repeat the RM46 billion cost for and Chow accused him of quoting The Star's number of RM70 billion to refuse to answer the fiscal return and clicked off.

Chow defended his decision to hang up in Mkini HERE. An extract from the report on the PSR project below: 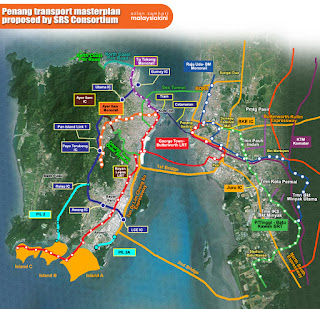 The PTMP includes the Bayan Lepas LRT, Ayer Itam Monorail, and Tanjung Tokong Monorail on Penang island, as well as the Raja Uda-Sungai Nyiur-Bukit Mertajam-Permatang Tinggi Monorail on the mainland, coupled with a BRT extension to Kepala Batas.

It also includes the Permatang Tinggi-Batu Kawan BRT line on the mainland, which will be extended northwards to Bukit Tengah/Seberang Jaya and southwards to Nibong Tebal.

Also in the masterplan are the Pan Island Link 1 (PIL1), Pan Island Link 2 and 2A, North Coast Pair Road, new interchanges at Butterworth-Kulim and Juru, road upgrades at Permatang Pasir-Perda and Bukit Minyak, as well as an undersea tunnel as a third link between the island and mainland.

Reclamation works for three manmade islands in the south of Penang, which will be used to fund the above projects, are also included in PTMP.

Penangites are environmentally sensitive and the claimed approval shock the people. Activists CAP and SAM spoken in Aliran HERE. Another report on NST HERE. 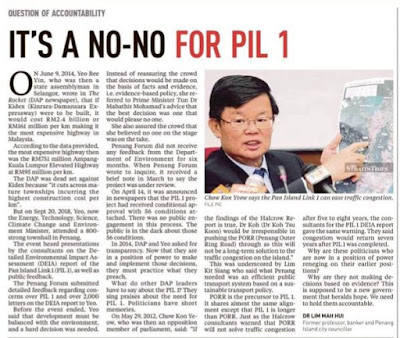 Lim Mah Hui, a former Penang Councillor who was removed by Guan Eng, questioned the accountability of this project in NST.

He has every reason to be cynical since media have been talking openly on land reclamation project in Penang since 2018.

It is indication of effort to prep up the investing public.

At the northeast, E&O announced their land reclamation for the major development Seri Tanjung Pinang Phase 2A (STP2A) is completed. This is RM15 billion GDV over 5 years.

Tan Sri Wan Azmi has returned to E&O with the private placement of 130 million shares to Sweetwater SPV Sdn Bhd in middle March.

In August 2018, Sweetwater made a windfall profit to sell their 30% interest in SPLASH to Pengurusan Air Selangor Sdn Bhd.  SPLASH was sold for RM2. 55 billion, up from early plan by previous MB Tan Sri Khalid Ibrahim for RM270 million.

Is there an invisible shareholder in Sweetwater that enable E&O to secure the land reclamation for housing project in Penang?

Will they bid for PSR or it is Guan Eng's turf?

Meanwhile, Roger Teoh, a PhD postgraduate studying at the Centre for Transport Studies, Imperial College London wrote to The Malaysian Insight HERE on the 5 reasons PTMP will be a white elephant in the making.

He question why if the density will be on the rise, the need to still squeeze it on the island.

The cost will make it the most expensive transport infrastructure in the country. Economic benefit of Penang LRT artificially inflated.

Traffic congestation will stay. Public transport use of 40% will not be met by huge margin.

Denial but surely ON! 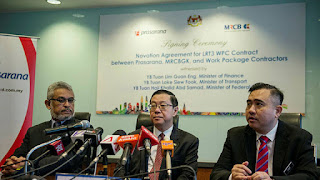 In The Edge, Khalid said MPFN had given the Penang Government an 18-point advisory, complete with additional comments and advice by several Ministries.

"The State Government was also advised to continue discussions with the local communities and people who will be affected by this development and ensure that their needs are given appropriate attention,” Khalid said.

"In view that the application submitted was in the form of masterplan, it needs to be resubmitted to get the advice of the council under subsection 22(2A), Act 172,” he said.

Chow Kon Yeow said the State Government would abide by the 18-point advisory given by MPFN before implementing the PSR proposal.

Lim Mah Hui would have his doubts. The former Chemical Bank executive can smell something is cooking.

Heard the Chinese press are beginning to be critical towards Guan Eng and DAP. However, Chinese voters not ready to vote non-DAP. So slowly but hopefully surely .. lets see Sandakan by-election.
at 4/22/2019 10:04:00 AM