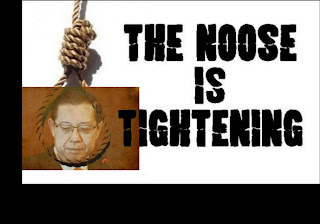 On a recent weekend trip to Penang, we got invited for seafood dinner at Pantai Acheh, near Nibung Tebal, Penang.

He was the same Chinese businessman that gave us the family background of Jho Low and the information he borrowed money from his father's friends to impress people of positions, influence, and celebrities to develop his business interest.

This time around the conversation was about former Chief Minister of Penang and now Minister of Finance. He knew us as a blogger from KL. Dare not tell we are Johorean, and more so, same hometown as Lim Guan Eng's, Batu Pahat.

The last thing we should do is to tell that,  turn him into a fire breathing dragon, and ruin dinner. Johorean are proud and friendly people, but Guan Eng and his Johorean Chinese cronies gave Johoreans a bad name in Penang.

It was a wonderful dinner, but the outcome of the conversation should be worrying for the Batu Pahat-an, who made Penang his home base and bought a bungalow at Jalan Pinhorn albeit with no swimming pool. 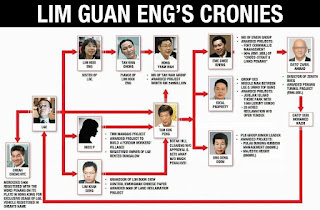 Apparently, all the cronies Guan Eng developed during his tenure as CM and project recepients in his first year as MOF are in trouble.

One by one, one after another, the cronies he developed to support him financially and deliver on the implemention of government projects are facing financial problems or legal suits.

Few are either being sued by the bank or not getting bank's support to fund their projects. Of late, there are few more have injunctions placed to freeze their assets by China company linked to the Penang tunnel related projects.

One crony from an important and influential Penang family have a major problem that could break-up the family. Co-incidently, the root cause has strong link to China.

This blog have repeatedly revealed the story of Guan Eng insult an unofficial China entourage in his first week as MOF.

It is indication there is truth in the story that Guan Eng's presence is not wanted by China in any Malaysian official trip. Hence, the rumour he could not get visa to go.

Actually, he could get visa and he make an official trip, but no senior China officials accepted his request to visit. He ended up meeting his fellow DAP politicians in Shanghai.

We are reminded of the dinner conversation upon reading a recent FB posting by Wong Jae Senn entitled "Has DAP lost the plot? Looks like it." Nothing DAP is doing helped to improve public acceptance.

On top of that, endless string of Chinese businessmen are now beyond complaining of Guan Eng. They hate him and unbelievably, willing to have BN back!

It may not waver general Chinese support for DAP yet, but give Guan Eng the rope, he will hang DAP too. Guan Eng's arrogance, ego and rude remarks will only hasten the hate.

At the rate things are going in Penang on the Penang Transport Master plan involving three islands to reclaim and facing strong fishermen protest, it could be Guan Eng's noose.

The disgruntled Penangites may rejoice should he be extradited to China in exchange for Jho Low. 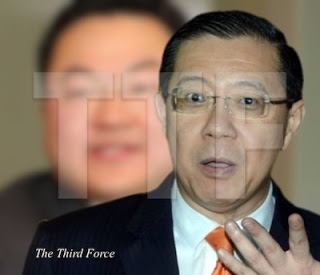 That brings to the story of Jho Low and the repeated attempt by IGP Dato Hamid Bador to evade the status of Jho Low's extradition back to Malaysia.

Frankly speaking, the government have been slow to initiate the procedure for his extradition. The process takes time.

However, lawyers familiar with the process of extradition believed government have legitimate basis to extradite Jho Low, but it is not strong enough.

Jho Low was only being charged in absentia few months ago, but the legality of the cases is still in doubt. Hamid was merely saving the Government's face.

During dinner conversation, the businessman claimed to know family members of Jho Low have been regularly flying in and out to a certain destination. He claimed Jho Low is not hiding in China.

However, the popular believe is he is. It was Guan Eng who made that claim and later said China Embassy denied. The kiasu man he is, Guan Eng embarassed the Embassy by claiming Jho Low entered China through a different name.

Upon winning GE14, it was Guan Eng who expressed the view to cancel Jho Low's passport. He has been making nasty remarks against Jho Low and at his behest, actions were made to confiscate Jho Low's family.

There are Penangites, who are slighted by this Johorean insult and action towards a local Penangite. The manner Guan Eng pursued Jho Loh raised suspicion his overkill is to hide something.

It is an open secret in Penang that Guan Eng has "business" involvement with Dato Tedy Teow and the MBI International moneygame scam. This was mentioned during dinner and the businessman said it loudly, as though intentionally to allow other diners to eavesdrop, of knowing the money trail.

Putting two and two together, could it be Jho Low is hiding in China and China will only expedite the extradition process on a tic-for-tac basis?

Tedy Teow had allegedly con substantial number of Chinese investors in Shanghai. Possibly, China authority could request Malaysia to extradite him to face charges in China and in exchange for extradition of Jho Low.

However, there is an existing charge against Tedy and his family members in court by Bank Negara. So it is his saviour but China may want the government to intervene.

Maybe another option that could satisfy China and Malaysians at large is to extradite Guan Eng instead in exchange for Jho Low.

Though not possible to happen to a sitting Minister and DAP top leadership, it is nevertheless an interesting and amusing possibility.

Uprising against the Lims 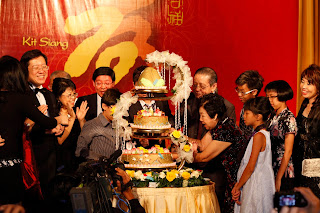 Talk is the Lim family could be in trouble and there is rising resentment against Guan Eng from upcoming leaders.

In the past, many DAP leaders had fallen victim to make way for the rise of Guan Eng and any uprising is squashed by the senior Lim. This time around the resentment could gain greater momentum should it be resisted using strong arm tactics.

Except for Melaka, all state DAP leaders are waiting for the timing to revolt against Guan Eng concurrently. Kit Siang can get swept along to resist it.

It is seen as necessary to save DAP from becoming the receiving end of a GE15 political tsunami backwave.

There are political Facebookers that commented DAP is silence on the Azmin's gay sex video scandal and have quitened down their support for Dato Seri Anwar Ibrahim to a wait and see stance.

In her blog, Helen Ang predicted DAP could put Anwar under the bus to side with Mahathir because though politically advantageous to DAP, Anwar is no more politically feasible with the position taken by the powerful UMNO-PAS coalition in the making.

Her reading of Latheefa Koya's recent statement to re-open closed cases is the same as our's. Latheefa said MACC will not re-open the Jln Pinhorm bungalow case but she could be looking at the Penang tunnel case.

They could even look into the link between Phang Li Koon and Guan Eng's wife, Betty Chiew. DAP Penang insider sources claimed Phang is a member of the board in almost all Penang SLCs, in which Betty draw salaries.

If there is any truth to these allegations and MACC could substantiate it in court, not only the days of Guan Eng can be timed with an egg timer but the political noose is tightening around his neck.

After successfully splitting PKR, Mahathir is suspected to next train his gun on Guan Eng and DAP. Never reject the Old Man request for miney.

This time, Tommy Thomas may not be saving him as the man that he used to do so, Dato Hanafiah Zakaria was recently sent to AGC's cold storage.

And, Tommy is fighting for his survival and believed to have pledged loyalty to Tun Dr Mahathir and playing ball with Guan Eng's nemesis, Tun Daim Zainuddin.

As private practise lawyer, Tommy have been known to bat for any side that could afford his expensive legal fee.

Superb narrative over issues closed and climbing out of a grave of where the 6 feet of earth is broken as if an earthquake just occurred!

Don't believe any minority Chinese would even think of doing all this nonsense given the fact their backs are always being watched 24/7.
Then again freedom of speech and thought with the PH government allows anyone to wallow in mud and whatever one believes is holier than thou!

Stranger than fiction like MO1 visiting and communicating with the soul of the Prophet!

You maybe right or you maybe wrong or was it just a lunatic you are looking for!