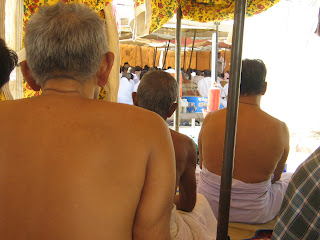 Today is October 12th, 2011 equivalent to Zulhijjah 16 1432. It means we have been away from Malaysia for exactly one month.

For most of us at Maktab 93 in Hotel Luluat At Tawheed, we have got two to three days of rest since returning from the trying Hajj journey which ended with Mina or Muna, as local also called. To complete Hajj, one needs to perform the tawaf Ifada and saei Haji.

Mr and Mrs Hisham had completed their Haj with the tawaf and saei last night by slowly pacing through the extremely packed Masjidil Haram.

While celebrating the momentous occasion by sharing with his wife, an arabic portion of a pack of nasi lemak at Felda’s D Saji restaurant at the Safwah Tower, Hisham contemplates about the trial and tribulations of the journey.

Hisham was my neighbour in Mina. The tent was packed to the brim that I was sleeping at his feet.

In Mina then, we took it in stride as part of God’s trial and tribulations during the journey. Space is limited in Mina. Getting more Hajj quota for Malaysia will only translate into more squeezing accommodation in Mina. 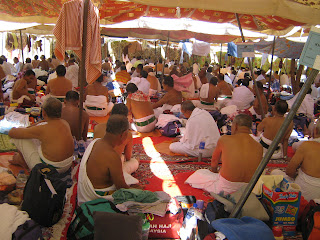 He, another of his fellow Kelantanese from Setiawangsa and in fact all the 15 within our four post accommodation had a great sense of humour and camaraderie. It lightened the pressure of living in the tent in Mina that closely resembled a “KFC chicken fattening farm.”

Why am I calling it a “KFC chicken fattening farm”?

You see, despite the cramped living condition and insufficient toilet facility, we were given sufficient and endless food, fruits and water. The lights were kept on around the clock. So by 45 days, were should be ready for the supermarkets and KFC outlets.

A little bit of humour there.

By the time we left for the “real Haj” that began last Friday for the great assembly in Arafah, the weather and temperature should have got to most of us, health-wise. If not, the large crowd may have shocked many of us. Otherwise, the Arab temperament could stress us up.

Given the conditions, minute everyday issue can be an insurmountable problem and a test on one’s inner sanctity, especially to those with thinning patience and restrain. 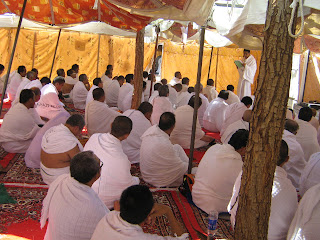 We left Mekah for Arafah and Mina in ihram clothing. So we had to observe 17 don’t. Adding to the heat and crowd congestion, one can get agitated from pettiness, weakness, hunger, sickness, lethargy, and tiredness to lose one’s patience and violate ihram prohibition.

All this made the various steps in performing the Haj - the fifth pillar of Islam - incomparably more challenging and test on one’s patience.

But Hisham and his wife had an interesting theory. To them, there were no trial and tribulation from God on the Malaysian pilgrims.

He said, “Everybody, including the authorities, especially the shopkeepers, were saying, “Malaysia bagus.” The Malaysians we can claim were model pilgrims - polite, proper and patient. It is possible that God did not put us through any direct trial and tribulations. If there had been any, it is on an individual level.”

Other than issues of aqidah (faith) and practise, one aspect of the Islamic spirituality seldom emphasied but is of importance is morality (akhlak) and manners (adab). This is the aspect of Islam well embodied by the Malay and Nusantarans.

“No,” I reluctantly agreed.

Hisham continued, “So, you see God was nice to us. The trial and tribulations during our journey were man-made. It was a script put together by Tabung Haji and the local Arabs.

“Otherwise, the Malaysian pilgrims will have no “war stories” to tell their children and grandchildren back home.”

He adds, “And furthermore, Tabung Haji will be worried of being saddled with negligent pilgrims in the future that over-rely on them and take things for granted.”

My wife bought into it.

“Tabung Haji have been very good in all aspect from the moment were left the country until the transportation chaos from Arafah to Muzdalifah, then to Mina and the return from Mina.” 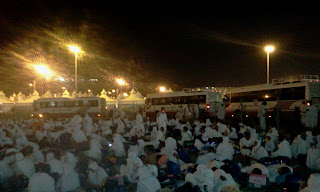 Mrs Hisham interjects again, “It s just not the transportation. Do you know that the place they locked us in Muzdalifah is a camel farm?”

My wife replied, “No wonder I smell dung.

“We were all badly affected there. The dusty air affected my husband who just got out of Hospital. Worse was my sister. But she insists not to put on surgical mask and pay dam. I don’t care. I wear the mask. The dam only cost 30 riyal.”

Mrs Hisham said, “Tabung Haji has a bad habit of using “dugaan” (test) to calm us when we complain. Everytime we get angry over poor and unclean hotel services, they kept saying “sabar, sabar ...dugaan, dugaan”. They are beginning to sound like P Ramlee in Pendekar Bujang Lapok. The ustazs are used to sermonise on “dugaan” and “sabar” so we don’t complain.”

Tabung Haji’s ibadah guide advised us to restrain from quarrels and arguing, not lie, avoid exorbitant spending, and encouraged to help each other in this trying period.

But Mrs Hisham thinks otherwise, “They have this “budaya fakir”. They kept using God and religion as excuse to not address issues and problems within their purview as human.”

Mrs Hisham was getting serious and heavy.

I know my wife was going to complain about her perception that Tabung Haji officials were picking on her for officially writing a long list of complains on the hotel, especially on her three days without air conditioning in her room in Mekah and including safety and emergency issues. She claimed her complain was mentioned in a tazkirah.

Before my wife could add more fire to the already hot discussion, I interjected and diverted the conversation.

“I asked the Tabung Haji officials with regard to the transport issue. They said it is beyond them. Under the Mu’assasah system established by the Saudis, the transportation, accommodation and medical aspect during the Hajj is handled by them. Tabung Haji can’t do anything.”

Hisham answered, “The system were fine. Remember the bus numbering they assigned us? The Saudis refused to adhere and implement their designed system.

“Bus 29 pilgrims were still waiting at one end. The Saudi bus handler suddenly out of the blue started an odd and even arrangement at two other gates and Bus 33 and 34 pilgrims left before the long waiting Bus 29 pilgrims.”

Mrs Hisham interjected, “I think we shouldn’t blame the Saudi only because I overheard a Tabung Haji official talking to a Saudi bus people at their office to follow the odd and even arrangement.

“In Arafah, Tabung Haji did not communicate and announced properly the transport arrangement. They had no people standby to direct the crowd. Basically, they “lepas tangan.” It’s impossible that they can’t come to an understanding with these Arab bus operators on a simple set of procedures.” 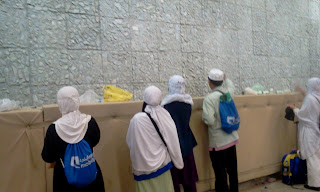 I tried to defend Tabung Haji.

“But let’s not load everything on Tabung Haji. They are earnest in carrying out their duty. Problems and situations kept happening around the clock that they hardly could get an eye shut.

“I was at their office trying to “sembang=sembang” but we couldn’t get a conversation going. One problem after another kept cropping up and people coming to report problems.”

My wife added, “Things also worsen because a lot of old folks from kampong, who are mostly first time travellers, are so kiasu and selfish. They start to queue before their turn and mostly rush in to jump queue. There are those that go in big bags and their bags blocked passenger pathway in the bus.”

I disagreed, “They are not kiasu or selfish but insecure and unfamiliar. They are too afraid to be left behind.”

Mrs Hisham had a different view, “These old folks have their own way of thinking. Some are psychologically reversing to a state of mind of a child.”

Hisham deviated the conversation, “Talking about Tabung Haji kept using “dugaan” and “sabar” as excuse to any problems we raised, something interesting happened in Mina.”

“Was there a mishap?” I asked.

“No. After you left back to Mekah, one Tabung Haji official came to our tent fuming about some pilgrims changing tent without informing. If anything untoward happened, it will be a major headache for them to trace people.”

Hisham continued, “We gave one back to them. As I rubbed and massage his stressed shoulders, I said we must be “sabar” in facing up to “dugaan” in the holy land. Haji Harun was funnier as he suggested the Tabung Haji chap to swallow some SabiRun pills.”

“In that case, Tabung Haji is also tested by God. It leaves the Arab as the only one not tested and they profited enormously from the Hajj season. Then all these “dugaan” must be an Arab conspiracy,” I added to the laughter of others.

*This is just a satirical piece. The names and events are not necessarily real. Though there may be some sarcasm, please do not take it too seriously.

God’s trial and tribulations can come in many forms. It can come through others, ourselves, etc.

Tuan,
Nice to see that you are back with a renewed sense of perspective and criticism in a very Nusantara way. May Allah grant you the mabrur hajj and safe journey home to you and all the hajj.

When we finally reach the shores of our motherland, later, then we'd realise the things that erked us at Allah's Investiture Ceremony in Arafat, the Misha'ir and at the battleground Mina were mere irritations not worth quarelling about.