Since Pakatan Rakyat became state governments and more dominant in Parliament, Malaysia is constantly in a state of havoc. It is no more as peaceful as it used to be. Political debate, discourse and quarrel dominate our lives than the agenda to build a nation.

The more liberals would say it comes with the openness and people cannot remain passive and subdued by the authorities. To some extent it is true, but it should be done with maturity and in a peaceful manner.

Conversation on few Whats App groups yesterday was about the absense or more precisely, minimal presence of Chinese at the Merdeka parade. It was as though there is a concerted effort to boycott Merdeka. Maybe Chinese do not like participating in parade.

During the many Bersih demonstrations, one could see Chinese maintained a token presence. The incident of Pasukan Peronda Sukarela (PPS) paraded in Penang but to a waiting police will only deter them.

It is poor taste on the part of police to take in the 154 PPS members on a day to exhibit patriotism and unity as Malaysians. 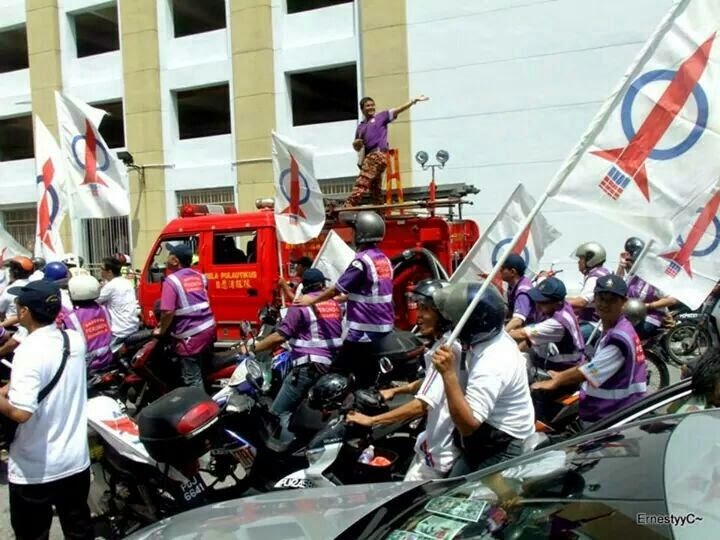 But the law is the law. It must be upheld. There is no room for emotion and sentiment in it's enforcement. No room for a politicking Attorney General.

As law enforcement officials, the police may have their own unique reason and ways to address the PPS matter. If there is anyone to fault, the Penang Chief Minister, Lim Guan Eng should be at fault for openly challenging the police.

Without ISA and the more dominant presence of Pakatan Rakyat, DAP and PKR is seldom at the fore front to challenge authority. The video of Lim Guan Eng challenging the police, below:


Guan Eng was refering to Datuk Huan Cheng Guan who participated in the Bukit Gelugur by-election and lost his deposit. Huan was angry to see PPS in uniform openly involved to put up DAP flags and sabotaged challengers posters and flag.


After the mass arrest, Guan Eng's response was expectedly one of defiant. He consistently claimed PPS is legal, established by the state government and not subject to the Societies Act. The video below:


Guan Eng claimed PPS is similar to JKKK, which is involved is commissioned to monitor security condition in kampong and rural area. He continued to be defiant and up his ante against the Chief Police:


This does not come out of the blue and may have been suspiciously planned. The issue DAP raised at the GE 12 in 2008 was crime and public security. It was the time Pakatan Rakyat placed pressure on former IGP, Tan Sri Musa Hassan.

DAP anticipated the need to have their own security force to face up to the police. Imbedded in their mind is that police are pro-BN and will have ulterior political motive to help BN in every of their actions.

As a political party, every of DAP action and position on issues have it's political interest, and agenda, visible or subversion. For Guan Eng to defend the PPS members with criminal record and positive urine tests, it only leads many to the believe that PPS too have insidious motive.

PPS members had beaten up individuals with differing political views. They ignored public order and police authority. And, there have been confrontations with the police. No one gets away with creating havoc, it is a matter of time.

Vigilante groups have existed in the past and they eventually lose out in any confrontation with police. In this case, the group is backed by a state government which openly defy police and are provocative towards them. It proves they are preparing to take over security affair of the state from police or there is something else. 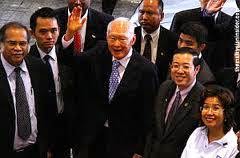 The manner DAP provoked the police lead some to believe that DAP planned this confrontation. Guan Eng arguments could translate to a larger question of the state authority versus federal authority.

According to Schedule 9 of the Federal Constitution, internal security is a federal matter. But, DAP may have wished to have their own security personnel for their ruled state, thus find loophole in the state law and local ordinance.

Some sceptics see DAP wants their own police force in which the majority is made up of Chinese. They argued it can be done under a local ordinance. DAP is not DAP unless there is a bigger political agenda.

Questioning the Federal list is in tandem with their agenda for Sabah and Sarawak.

They are using Dyana Sofea as the Bumiputera voice for more Pribumi and state rights. Only the rights and interests of the other races is sounded equally loud.

State rights is seldom expressed in terms of bigger percentage of oil royalty. That is where the questioning on Federal list could lead to.

In striving for this agenda, DAP is suspiciously involved in creating havoc by the call for seccession loudly heard on the social media.

It could merely be a ploy to squeeze more from the federal government. The past ISA detention of Dato Dr Jeffrey Kitingan revealed that there was a serious guerilla military operation for a coup d'etat.

Slowly the politics of hate and strategy to ignite havoc deployed will be re-routed as support for DAP and Pakatan Rakyat. They have the support of urban voters and is working to gain the support of non-Muslim from the interiors.

The call for oil royalty do have political value in Kelantan.

Dato' Husam's Royalti group may have lost their case in the courts but it is the court of public opinion in Kelantan that matters. It need to be fueled to maintain PAS's support.

As one approach the Pengkalan Kubor by-election, the promises made by Husam that will never could be fulfilled will be recycled together with the blame against BN.

DAP's case will ignite back the same demand for oil royalty. 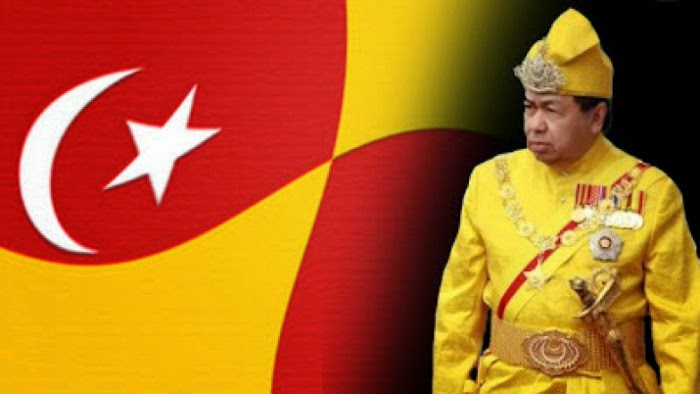 Only this time, PAS is seemingly at loggerhead with PKR on Selangor. Havoc ....

If PKR insist on running, one can expect PAS to boycott in the same manner they boycotted DAP at the Telok Intan by-election. PKR does not have sufficient election machinery in Pengkalan Kubur and have to rely on PAS machinery. They will only get token help.

In Selangor, PAS is believed to have the support of Sultan for a PAS Menteri Besar to replace Tan Sri Khalid Ibrahim. However, they are divided between the Anwarinas affection for Anwar and Pakatan Rakyat and the ulamak desire to reassert their Islamic agenda.

DAP makes no bone of not wanting to have Menteri Besar from PAS. In Penang, PAS assemblyman are not offered position as state exco and religion portfolio given to PKR.

Sultan requested all Pakatan Rakyat parties to nominate two names from their own parties but PKR and DAP are steadfast to insist on one and only Datin Seri Wan Azizah.

If PAS nominate two PAS state assemblymen, it will be theirs till a vote of no confidence is tabled at the Selangor state assembly in November.

PAS can only maintain that position by having alliance with UMNO and have few PKR members jump to their side.

As for tomorrow's deadline to submit the names, Sultan will receive them but in a few days time, his royal highness is anticipated to reject all and request them to re-submit.

Before November, Anwar's schedule is already filled with court cases. He has his sodomy appeal at the Federal Court in late October, in which it is as good as done for him to enter Sungai Buloh Prison. He has no new point of law to raise. 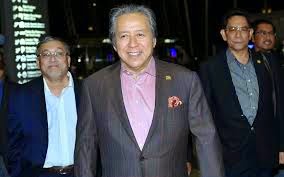 In early October, Anwar is due to face Dato Anifah Aman in his lawsuit for an unfavourable statement made by Anifah.

On the first day, Anwar was embarrassingly caught lying to claim it was Anifah who called him to defect on the stand. He claimed to have the numbers to takeover but when asked to name the 40 MPs ready to defect, he refused. [Read The Mole here]

On the second day, Anwar acknowledged all that he said in the following video entitled Anwar pembohong.

TV3 reported that few of Anwar's former political allies will testify and it will only weaken his case as they revealed his lies. It may not have an impact on Anwar's diehards but appearance from existing PKR leaders and supporters will surely catch the headline and turn a few hardheads around.

Anifah will take on Anwar and is due to take the stands in October.

The politician lawyer from Kimanis Sabah has shed a new light to the position of Foreign Minister. His presence in court together with Dato Zaharin Hashim and Dato Yong Teck Lee will surely create havoc to Anwar's already muddied reputation.

It is a pity that Tan Sri Syed Hamid chicken out from Anwar's lawsuit against him. It would only pack his pre-prison schedule and create more havoc in his head. Syed Hamid apologised and retracted his words against the compulsive liar.

A cheetah won't try to killed the lion ,for food ,if the lion looks healthy and strong .

Pakatan Rakyat is too blame for abusing the freedom accorded till ISA had to be brought back.

Currently people want back ISA and against abolishing sedition.act.

Bring back ISA. It will make Malaysia a happier place to stay for the normal rakyat

if there are few Isis sprawling the desert, no untoward thing will happen. If thousand and thousands of them around, watch up for the bad signs.

this is what the analyeast called as "herds mannerism". it is defined as animal flocking invigorates overzealous and negativity. that is why in Ferguson recently, no grouping were allowed to avoid the above mentality formation that may affect civility and social conscience.