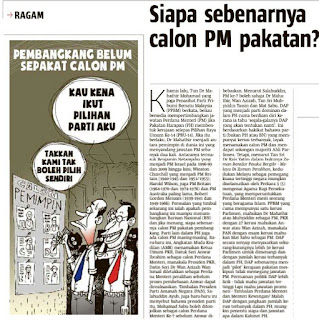 Even Tun Dr Mahathr had people leaving his ceramah in Alor Setar and pretend to be sick as excuse to not attend law audience ceramah. 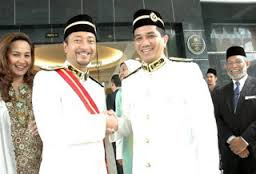 Other than Mukhriz, the other choice for Mahathir is Dato Seri Azmin Ali. One son told us few years ago after breakfast at KLCC, "Look at Azmin ... 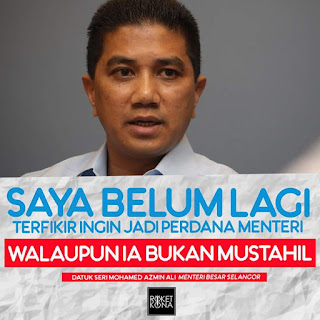 Azmin has to pretend to be disinterested and claim he is focusing on Selangor. He said he was not interested in Tan Sri Khalid Ibrahim's job, but out-manouvred Dato Seri Anwar Ibrahm's wife, Datin Seri Dr Wan Azizah Ismail to be Selangor MB.

Do not take the word of this ambitous man who once told his University friends in Minnesota, US of his ambition to be Prime Minister one day.

After knocking out a friend of mine, he assumed the Malaysian Student Association President and used it as platform to hobnob with Malaysian VVIPs, including Anwar visiting New York and Washington.

Since lots of his skeletons are beginning to rear its ugly heads and he is starting to not ignore the allegations on his families, he will remain only as a trump card of Mahathir.

Nevertheless, Azmin still have the ambition. 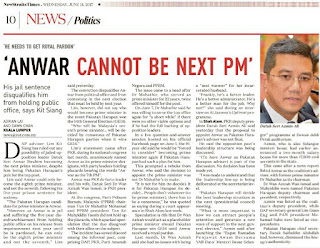 Whether they like it or not, PH must face the question: 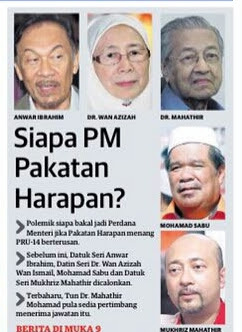 The choice is limited to one or two.

However, Mahathir has announced intention to be Prime Minister with Wan Aziah as Deputy Prime Minister. Welcome back Mahathirism, ISA, privatisation, nepotism, cronyism and proxiy--ism, and a new one hedonism! 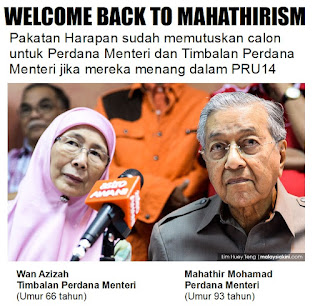 The question now is has it received Anwar's blessing? 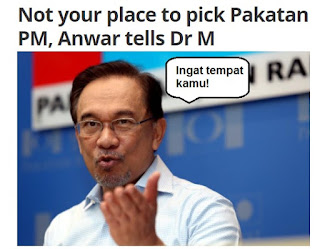 DAP is merely using Mahathir but will not empower him. Contrary to Syed Akbar's forecast, where in heaven will PPBM get their 10 seats. He hardly knows and ever visit the ground and know sufficient political personalities to make such prediction.

Bet my one month salary that Mahathir will merely be DAP's puppet. Once attain power, DAP will flex their muscle. Only a dumbbell will deny that. 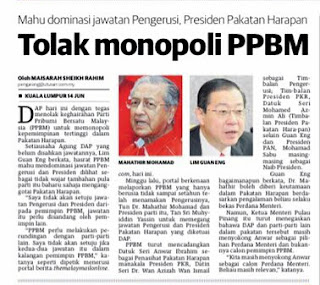 Mahathir has loss any sense of dignity and honour after U--turning on every position and views he held and had to kow tow to Anwar in order to save his skin.

He has stooped to DAP and willingly be their puppet: 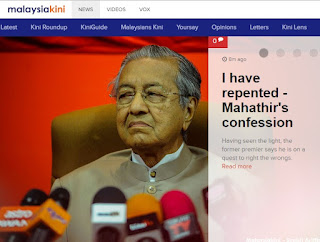 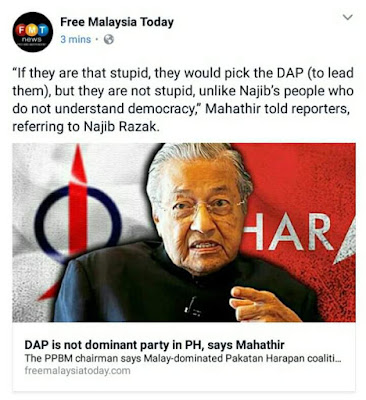 DAP is helping to downplay the BNM forex loss they fought for over two decades. They have nothing to worry as they have got Mahathir by the balls.

The BNM forex loss of RM32.5 billion is not yet the peak of his abuses of power, but he is already scrambling with a new lie that forex intervention by BNM is a loss and Najib had committed to bigger losses.

It serve to deceive the ignorant and naive public, especially the dumb-bell Kelab Che Det who proud themselves of  continually being lied to.

In the meanwhile, Anwar has not forgotten: 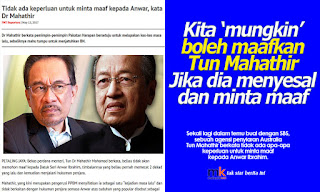 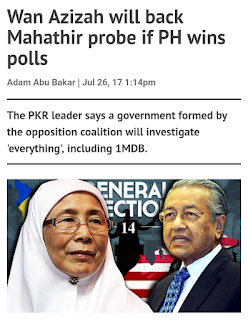 Has she resigned to accept that Anwar could not be PM as said by Azmin? Her friends at Kolej Tunku Khurshiah, Seremban warned to not underestimate her as she is ambitous too. 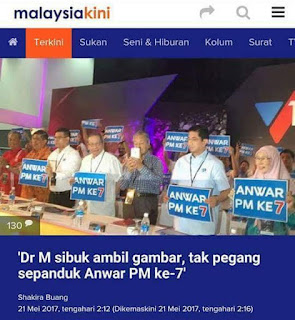 Mahathir made it clear he does not want Anwar back and deep inside him, he is still afraid of Anwar returning before he could topple Najib and consolidate power with UMNO. It is an open secret that he has expressed this to PPBM leaders who resigned.

His desire to seize back power and supercede Robert Mugabe has not waned. Lets remember back his narratives with regard to returning as PM. 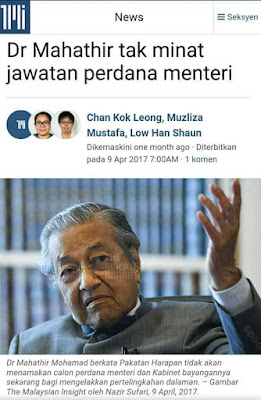 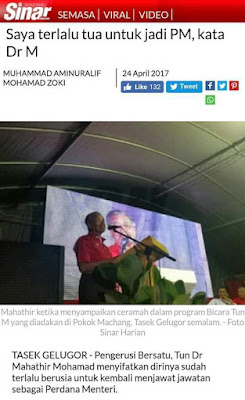 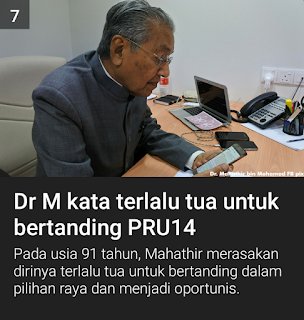 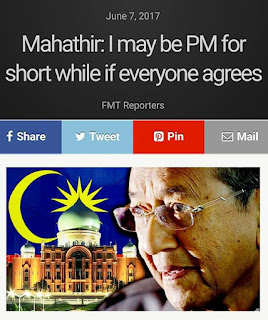 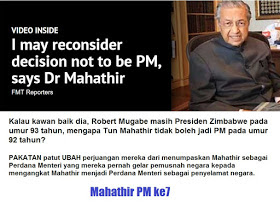 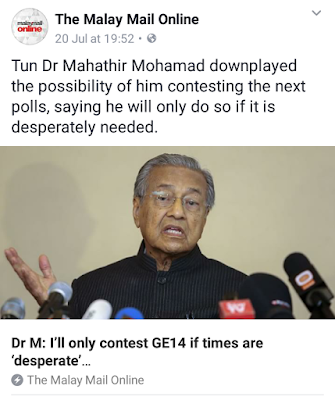 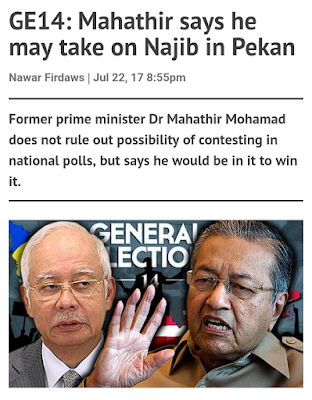 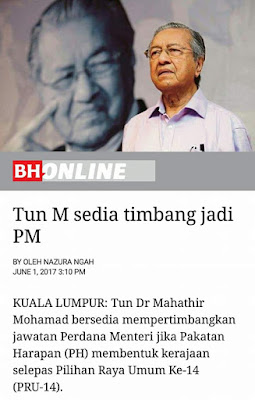 Remember that Mahathir is a Keling. He habitually lie all the time.

Perhaps, the reality is PH do not have any other choice but Mahathir. Lim Kit Siang could only be puppet master

Is he a choice? Well these were what was said: 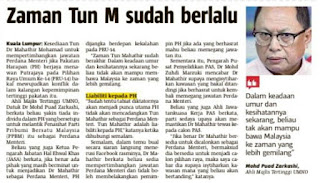 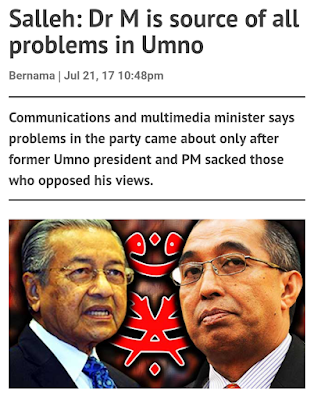 So he is basically taking his problems to burden PH. One pro-opposition supporter, Hafidz Baharom wrote in The Malaysia Insight here to announce he is voting BN as he lambasted the DAP MP from Kluang as being in denial.


The word on the ground is that the Malays are now divided three ways among PAS, Umno and PH. Even giving each an equal share of the Malay votes, it would be a 33% split among them.

Yet, Liew believes PH can secure an additional 17% from PAS or Umno, while somehow maintaining the waning non-Malay vote, which is also another concern.

He has forgotten that there is also fatigue enough to end up stopping people from voting altogether due to the teaming up with Bersatu, mostly due to the disapproval of Dr Mahathir Mohamad being the leading voice in this campaign. 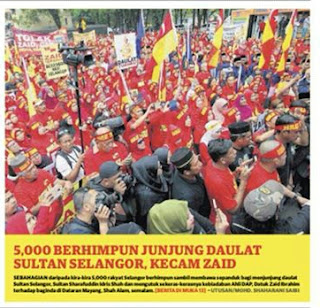 Furthermore, Zakhir Mohamed in his Facebook raised the issue of Mahathir's relationship with the royal households:


Of late, Dr Mahathir has carelessly put himself in the awkward position of been rubbing HRH Rulers the wrong end and actually started several heaty friction.

Might one add His Majesty SPB YDP Agong V no longer have the pleasure of Dr Mahathir’s company in all State Events, despite as a former Prime Minister and holder of esteemed SMN and SSM awards.

Taken history into consideration, it would just perhaps worsen HRH Rulers’s feeling towards the former UMNO President, who canvassed the Malays to rise against HRH Rulers between 1983 and 1993, twice and had the Federal Constitution amended.

All and in sundry, is Dr Mahathir now considered somewhat a de facto Persona Non Grata?

PH must be halucinating from drugs to expect Mahathir to be appointed PM by the royalty. The Agong from Kelantan is not his fan.

Without Agong consent, PH is not a registered entity to claim to have the highest majority in Parliament should they win.

He has yet to return the DK honour from Johor. It is Darah Kerabat and not Darah Keling.

The ideal thing for Mahathir is: 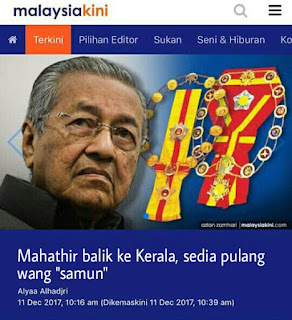 I propose either Salleh Said Keruak or Puad Zarkasi to be our next PM. Everybody else in Malaysia is not good enough. Now there is a proposal to kick Tun M to somewhere I don't know where with the cooperation of the Malay rulers.