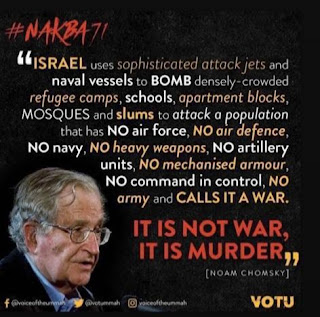 It is about humanity.

It is about the atrocities of Israel, supporting superpowers, and indifferent rich Arab brothers against innocent and helpless civilian, including women, children and the aged.

Putting aside the cringing name a group of senior Malaysian jounalists called themselves. It is not about politics or self grandisation, but their concern for the helpless Palestininians robbed of their lands and homes.

We demand the atrocities perpetrated by the Israeli military to stop immediately in Gaza. The intensifying assault on Gaza is beyond the pale of humanity. It is an act of aggression and a pompous show of strength on the part of the Israeli military on innocent populace.

The bombardment on homes, offices and infrastructures have caused unimaginable miseries to the Palestinian state. The attacks have killed at least 122 people including 31 children and injured at least 900 others. The civilian casualties are horrendous. The anger reverberates beyond Gaza, even into the state of Israel and the world over. It is simply an act of aggression that must be condemned by nations and civil societies.

We believe that the government of Israel is amassing its army for an incursion into Gaza. The move will further inflame the situation. The rising tension amidst the current Covid-19 pandemic is totally unnecessary.

We urge the Israeli journalists to act as the conscience of the nation. What is happening is not about the so-called Israel’s right to exist. They must also speak up on the rights of the Palestinians to co-exist and survive. The cruelties inflicted upon them the last seven decades are beyond the realm of human rights and human dignity.

We condemned the attack on offices of media organizations in Gaza. Israeli airstrikes have destroyed Al-Jalas Tower that housed the offices of several media organisations, including Associated Press and Al Jazeera. It is unthinkable that in this era, an army could target offices of media practitioners.

All these actions are planned which started the eviction of a number of Palestinian families from the Sheikh Jarrah neighbourhood, the right-wing mob attacks against Palestinians, the attacks against worshippers at Al Aqsa mosque and the strikes against targets in Palestine.

We are appalled by the fact that some segments of the Western media have typecast the Palestinians as militants, radicals and terrorists, the terms unsparingly used to justify the atrocities perpetrated by the Israeli military.

We are saddened by the fact that the United Nations General Assembly has yet to come out with a resolution to address the issue. We are appalled by the administration of President Joe Biden for blocking the Assembly to make any statement on that regard. This is not about religion or ideology, it is about human lives and those who are being oppressed and victimized for far too long.

We are also demanding the Organization of Islamic Conference (OIC) to come out with a strong statement on the matter. The Muslim world is looking up for guidance and direction from OIC. The silence, especially among the powerful members of OIC, is to say the least, palpable

May God save Palestine!

Please, eminent journalist give us some intellectual opinion, no emotions please.

I cannot believe a bunch of writers can issue statements like this.
Asking Israel to stop and in return be murdered by Hamas. Israel has taken this shit for a longtime. They just cannot have peace in this area as long politicians collect free money given by the Biden the bum President of the US.

Money sent by Malaysia to Palestine can be hijacked, what more?

I guess we all Malaysians should just keep our bloody mouth shut and stay out of this war as it is all politics created by IRAN in Palestine and for politicians to enjoy being a charit state to enrich themselves just like our PN is doing.


You are nobody but a bunch of loose charlies.
Shutup and keep Malaysia safe.