Is Khalid Ibrahim in another favour-for-cash with Lim Kim Hong?

When Khalid was asked by reporters on his link with Lim Kim Hong written in this blog on June 9th, 2008, the above was his response.

This blog has been in pursuit of the Selangor Menteri Besar, Tan Sri Khalid Ibrahim's past corruption trail since early 2007. The claim is that Khalid had a history of favour-for-cash arrangement with Lim Kim Hong.

With Khalid currently under financial difficulty to repay the balance loan of RM66 million with Bank Islam, there is suspicion that he had done another favour-for-cash arrangement.

This blog made it's first revelation of the link between Khalid Ibrahim and Lim Kim Hong during the Ijok by-election. A set of questions for candidate Khalid Ibrahim was posted on April 26th, 2007. The questions were partly answered by the first expose made by Dato Desa Pachi at the campaign trail in the presence of Najib.

In June 2008, another series of posting was made on the opening of Lim Kin Hong I Berhad's I-City.

Reporters asked Khalid about the posting and he denied. It was reported by The Star, The Edge and Bernama. Comments to news report was posted on June 12th that day itself in Khalid Ibrahim Menjawab Blog ini. 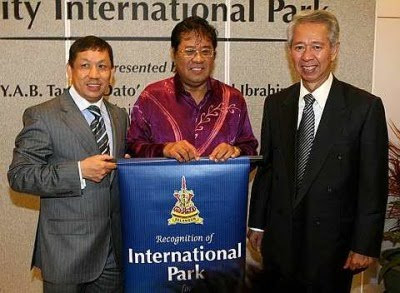 Khalid's political career in Selangor is in trouble.

He was described by many observers as the most incompetent Menteri Besar Selangor have ever had. Colleagues in PKR described him as indecisive. He has yet to solve a single of the claimed more than 80 abandoned projects. The problem has got nothing to do with allocation from the Federal Government.

His former assistant, Yahya Saari is being charged for corruption. Words are he is on deck for two charges - use of state fund to repair his personal car and Hari Raya Haji cow korban donation.

But Khalid's biggest headache still lies with his defaulted loans with Bank Islam. The Bank managed to get a judgement against him to pay up RM66 million balance of loan. All Khalid could do now is to seek for a stay in execution. He is trying to create issues out of the loan arrangement for bullet repayment.

In other words, he is left with buying time from paying up RM66 million or face eventual bankruptcy. A bankrupt can't be a wakil rakyat or hold public office.

If not for Anwar insistance and absence of a credible and acceptable replacement, few PKR office bearers believed that it is high time for Khalid to withdraw. But anyone having attained high position will always resist and would want to stay forever. To stay, Khalid must resolve his immediate financial problem.

Selangordaily.com reported that one condition on the development approval for I Berhad to develop I City was to allocate 4 acres of land for the development of SRJK (Tamil) Ladang Midlands at an area now refered as Section 7, Shah Alam. That serve to replace the current temporary Tamil school

It has come to their attention that Khalid had changed the condition and exempted I-City from allocating the said land for Tamil school. Malaysiakini.com reported that the allocated land was sold by the Pakatan government to a third party.

Health, Estate Workers, Poverty and Caring Government exco Dr Xavier Jayakumar made the excuse that the land for the Tamil school in I-City is not suitable as it is located in the midst of factories.

The Pakatan government purposely wanted to relocate to another part of Section 7 that was already slotted as recreational area. This seemed as an intention to instigate racial clash like in Section 23 since the area is a Malay majority area.

In response to enquiry by Saravanan, the local MIC Youth Leader, as what is the original to be used for, Dr Xavier had resorted to make wild accusation to claim MIC is inciting racial hatred.

As far as this blogger see, the allocated school land of 4 acres could certainly generate lucrative multimillion gross development value (GDV) with the necessary approvals. The new area for the school is actually taking up land already allocated for recreation. There is no real issue of inciting racial hatred or inconvenience of factory land.

MACC should pursue this.

I really wish UMNO is back in power again in Selangor. This way the Rakyat can be reminded of how the Toyol and his anak-anak-Toyol screwed the Rakyat blue. Then we will have a chance to kick the UMNO government out of power again. Kicking UMNO ass two GE in a row will be a dream come through for the Rakyat.

I wish to kick the pariah Hindraf Tamil Tigers. Btw, can a pariah lead an Indian party?

PKR has proven time and again that it is a party built on personal agenda and interest.

Even Wan Azizah is now thinking of finding a replacement for Anwar, politically lah, as her husband I dunno lah...

I personally believe that Zaid Ibrahim can lead PKR better and you have to remember that I don't like Zaid Ibrahim much...

Compared to the previous MBs, Khalid is an angel.