NEXT CHANGE: Revelation on Nor Yakcop's folly at Pantai 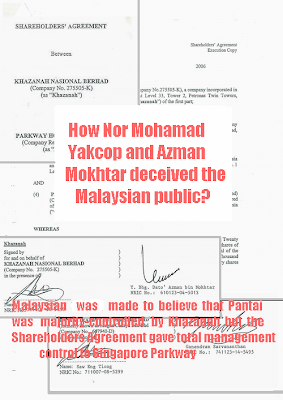 On Aug 4, 2006 the Goverment of Singapore Investment Corp (GIC) bought over 25 million shares in our biggest healthcare company, Pantai. That's more than 5 per cent. Parkway Holdings, a Singapore company, already has more than 31 per cent. That effectively gave them control. The bourse rule should have imposed a Mandatory General Offer (MGO).

There was public uproar as Malaysians question the Government's decision to approve the sales of a strategic asset to Singapore. Khazanah came in to salvage the situation as though to takeover Parkway's shares through a company Pantai Irama. But Pantai Irama was only 51% held by Khazanah and 49% owned by Parkway. Nevertheless, rules remained broken and it was an unnecessary expensive corporate exercise borne by Khazanah.

The untold part was that Pantai remained under the control of Singapore's Parkway. Malaysian were deceived by the fancy corporate restructuring designed by Khazanah's Tan Sri Azman Mokhtar and perhaps at the behest and approved by Tan Sri Nor Mohamad Yakcop, the then Minister of Finance II.

This blog will NEXT WEEK reveal how both of them allowed Singapapore to control an important national asset and deceived the public into believing Pantai is majority-controlled by Khazanah.

A very experianced economist had studied our Central Bank's balance sheet and said that Nor Yakcop, Anwar's ex-crony in Abrar/Mun Loong actually lost RM16 billion in forex speculation. Multibillions may have been lost in his tampering of Khazanah and the GLCs. The country's economy is in a state of mess by his bad planning. Najib is saddled by legacy issues that led back to Nor Yakcop.

Recently, he attempted to place a member of the destructive band of Tingkat 4 boys at the top of one of our GLCs. This will allow them to continue with their past corrupt practise that led to the destruction of our economic sovereignty. It is high time he be removed from the cabinet before he made more losses and mess.

just wondering whether or not rumors regarding a group of yuppies 'consultants' within Nor's circa truly exist?

This people u mention are they not from umno or are they pr people.

In some neighbouring countries perpetrators of economic crimes are put to pasture.

This is a legacy of tunDol slumberjek mismanagement.
Our national assets was privatised to illegally enrich some people, and if 1Malaysia was to regain credibility,the door must shown.
What about IJN ?
Pity those 200,000 families who are going to get 30 kilos of 15 % subsidy,whilst the top cats are swaggering around town.

Never be an apolegist in life. Right is right, wrong is wrong whether one is up or down.

Does it really matter if they are UMNO or PR? He is an UMNO MP, by the way.

I've never been inconsistent with the Tingkat 4 boys or TSNMY, whether they are on top or bottom.

TSNMY has to go. I don't know if he remembers me, but I know TSNMY personally. I don't care.

It is about the country and people. Thats what matters.

The timing is just right.
They have wasted hundred billions RM of our money.. get them out of here !!!

I hope you will also address:
1.The uproar of the sale of Pantai to Parkway, which went through without the the necessary regulatory approvals at the behest of a party stronger than TNMY, was largely due to the fact that Pantai had 2 govt concessions - Fomema & Medivest. Govt concessions cannot be owned by foreigners.

3.What has happened to the 2 govt concessions since then? They have been bought back in total at an undisclosed price.

4.Why did Khazanah buy additional shares in Parkway at a premium over the prevailing market price on the SES?

At that time, Parkway paid high price based on valuation of "assumed" extended concession of Medivest and Fomema (the golden goose and jewels of Pantai) and get the deal thru bypassing the government rules.

Where does Parkway obtained the confidence to be so daring for this high price acquisition?

Following the expose by some bloggers and the uproar and admission by the then PM of the "mistake", Khazanah come in to "bail-out" the situation, at the higher price of the already high price of Parkway.

If Parkway has violated the local laws, strangely why Khazanah willingly acquired at that high price. Shouldn't a big stick be used? Ada transparency & accountabiilty?


So, there are 2 rounds of high price deal.