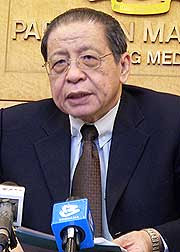 Lim Kit Siang's immediate response to Dr Mahathir's call on his and Anwar's bluff was in tweeter's response here.

It doesn't matter that Kit Siang made a subsequent macho attempt to response with some brevity here with loads of verbage like quintessence, Mahathirism, Machiavellianism, and perverse illogic as title.

These are but delayed and failed responses that does not hide his shaken disposition. Why spoil the fun of suing Kit Siang now?

Why Din must sound defeatist with a spin to ask Dr Mahathir to sue all Malaysian here? Anwar total lawsuit is already more than RM700 million.

Sorry Din, this nobody blogger you called, see it necessary to pick on you. Nothing lost from picking on a bigshot now spinning for Mr Liwat.

Why his suit conditional on outcome of RCI into Barry Wain’s allegation when M will do utmost 2block RCI though claiming support publicly?
12/23/2009 09:35 PM

The fact that his response is with a list of questions shows only want one thing. Kit Siang was in a state of gelabah. That is a Malay jingo to describe a panic person rambling in his speech and action.

Jebat Must Die in his posting Sleepless in Tokyo described Kit Siang's twitter response as his befuddled brain in such a shock that he could only churn out a lame defense to Dr Mahathir's reply. Jebat answered in the same respective order as Kit Siang's tweeter response below:

1. Mahathir reserved the right to sue pending the results of the RCI which you in the first place urged the government to set up!

2. Did Mahathir say he will block the RCI? In fact, Mahathir had also urged the government to set it up. The stupidest remark from Kit Siang would be ‘Why his suit conditional on outcome of RCI?’. This is because if the RCI did indeed find him guilty, then he does not have to sue the two of you!

3. Sigh. We have to wait for the results of the RCI which you called for in the first place! If Mahathir is declared innocent, only then Wain and yourself no longer have the position to defend against the impending suit as the RCI has revealed that the allegations are indeed libelous and defamatory.

4. Now this is redundant. Mahathir already called for the book to be released. Kit Siang has no more concrete things to say at this juncture.

Kit Sing in horror because he least expect Dr Mahathir to accept his challenge and every extra demand he could come up with to get out of a straight duel.

The typical DAP Cina kon*k kec*k would usually enlist new demands everytime their challenge is taken up. This time around Dr Mahathir have pre-empted all possible new deamnds even including DAP Tunku Aziz's Transparency International to be part of the Commission.

Taking from Jebat Must Die again, he explained that with teh burden of proof on Kit Siang and Barry Wain, they are likely to lose in the event of lawsuit. Reasons being below:

In any allegations, it is up to the accuser to bring out any proof that had substantiated his claims. In this case Barry Wain must show all the evidence that made him think ‘Mahathir wasted RM100 billion in 22 years’.

If he couldn’t substantiate his claims then his writings are purely slander.

The RCI is there to investigate this evidence prepared by Barry Wain and make a decision out of it. If Tun Dr Mahathir is found innocent, I think he will then proceed in suing Barry Wain, Kit Siang (for repeating the allegation) and other people he sees fit. This is because, these two people had defamed and maligned him unceremoniously.

Please be aware that Barry Wain clearly stated Mahathir’s name in making his allegation. He did not say it’s the Government of Malaysia that lost the RM100 billion.

The ramifications of this is huge on Barry Wain’s part since we all know that all decisions were made by the cabinet. The cabinet of 1981 to 2003.

Unless the whole people that were part of that cabinet are plunged along together with this accusations in this RCI, it will be hard to find Mahathir as solely guilty of it.

And who were in the cabinet of 1981 to 2003? Tun Musa Hitam, Tengku Razaleigh Hamzah, Abdullah Ahmad Badawi, Najib Tun Razak as well as Anwar Ibrahim. Anwar’s peons such as Azmin Ali and Kamaruddin Jaafar will also be implicated as their names will undoubtedly appear in many dealings Anwar made during his time as Finance Minister.

Mahathir even called the government to release all the documents and accounts from 1981 onwards so that the RCI can peruse over them. Now, if the RCI is set up, Najib must declassify all these historical documents. I bet many heads will roll especially the ones running around in Pakatan Rakyat.

Again, the ball is in Barry Wain’s and Najib’s courts. Wain with the documentary proof to prove his allegations and Najib to give the green light for the RCI.

Kit Siang should hold his horses. Dr Mahathir is in no hurry and it is his game you have to play by. Kit Siang could either prepare himself or flee to Singapore.

But is anyone curious as to why is Kit Siang in such a state of gelabah?

Could it be the fear that all his accumulated "Swiss account" abroad would end up in his nemesis Dr Mahathir's retirement or charity fund?

That certainly could be the reason. There were some blogs writing about it. But that could be just rumours.

But, this blogger have personally heard the same from a former DAP office bearer working under Kit Siang. It was also confirmed by an opposition MP.

Kit Siang have for years been asconding PAP's contribution to DAP. Just don't demand for a proof because you are not getting names.

Kit Siang gelabah? Why so? Just prosecute Lingam's RCI correct2 fiasco and that should do it for TDM.. that's just what Kit Siang demand for a start at least...ain't it right bro?

To LKS it dose not matter saying wise or stupid words. He only want to keep issues hited. So people kept busy. That is his job.

But what a pity for the Muslim. When they follow the flow; they will collect more debit in Bank Pusat Almahsha.

Obnoxious and rude commentors like you will not get the daylight, ever!

You are ban here.

To all those commentors writing in Chinese that is coming out in boxes and advertisers, it won't be publish neither.

Thank you for cooperating.

It is not that easy.

You are sold by the perception game by Anwar Ibrahim and PR.

The opposition pressure screwed up the Royal Commission.

The Commission did not abide to it's prescribed Term of Reference.

There are insufficient material of legal standing to take it further.

It's back to square one.

There is nothing to bind Dr Mahathir in the Lingam tape debacle.

I was told by one former Prosecutor. Thay can't even prosecute Lingam.

Gwo Burne will have to learn to speak in Parliament. Or he will be forgotten soon.

well..well..lks wants to make people remain busy?hehe..I suggest Tun M will sue them till they have nothing..till they have no any single underwear to be wore. Only then, they will be busy to do the right things to gain some penny to buy new underwear!

memang too obvious the Kit is panic.
He can't sleep...can't even walk without think about it even for just one second.
HoHoHoHoHo.....
Can't u see it?

you forgot Pak Lah & Haji KJ. They are also gelabah cause of the Petronas money.

Heard from the street of Putrajaya that Amokh will be kick out from Khazanah very soon for the obvious reason - too text-book material and not street smart to run the investment arm of Msia (a nicer version of being incompetent).

So Amokh, if you are reading this blog (i'm sure u do) u can start packing your stuff now.