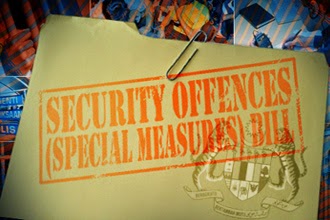 SOSMA or Security Offences (Special Measures) Act 2012 was supposed to replace the Internal Security Act (ISA) albeit with a civil libertarian flavour but still preserve it's role as a legislation against subversion, public disorder, etc.

The guiding principle behind law regarding securities matter is article 149 of the Federal Constitution.

In 149(1), it had laid out six areas in which any law enacted is valid even though it could be inconsistent with articles on Personal Liberties in Article 5, 9, 10 or 13 of the Federal Constitution.

Simplistically speaking, the six areas and it could tantamount to the definition of national security involved organised crime, uprising against King, racial incitation, unlawful overthrow of government, and anything involving public order.

For a wider and more definitive explanation, one will have to read in the Federal Constitution and books with explanatory text.

According to the lawyer raising the issue, Parliament may have wrongfully abolished the ISA and enacted SOSMA as replacement law. If anyone dare enough to take up the issue in court, one could see in disbelieve of Bar Council cooperating with Attorney General office.

The late Karpal Singh would understand the implication.

And, do not be surprise the ghost of Karpal resurrect to haunt the court and shrilling his warning,"Over my dead body!" 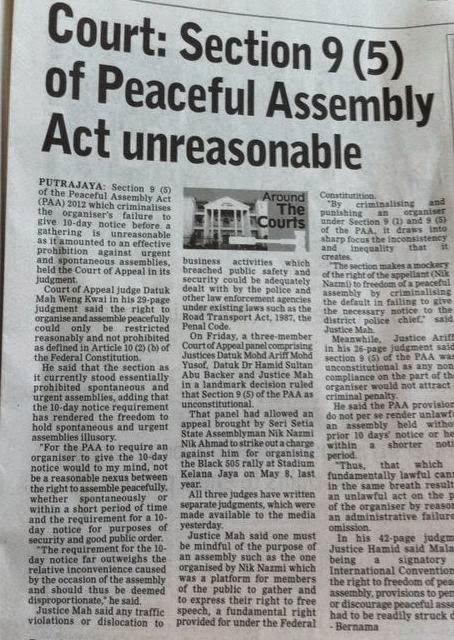 Thank to the spinned report that the Court of Appeal had judge Section 9 (5) of  SOSMA as unconstitutional and in contravention with articles on Personal Liberties in the Federal Constitution.

It was something the human rights activist and Bar Council wanted to hear and the public to believe. For PKR (although it was claimed to involve 95 NGOs) that was organising yesterday demonstration, the spin was something to be used to attract attendants.

In several pre-demonstration events, including a poorly attended forum in Melaka, PKR and their lawyers had extensively spread the same message.

Unfortunately, it was not much help.

Malaysians are already at a stage of demo-fatigue, opposition parties are facing internal implosion, and Chinese disinterest. From 20,000 attendance in the last Bersih, it dropped to between 10-13,000.

One can sense Anwar's frustration of the less than convincing numbers despite being able to hold the demonstration in front of the court that convicted him in 1998.

The lawyer, who was an astute student of the late Tan Sri Ahmad Ibrahim and Professor Shad Faruqi, he said it was untrue.

The judgement was more on the reasonableness of the 10 days time notice.

Too bad for Judge Dato Mohd Ariff who become political collateral damage from Malaysiakini's own spinning. Anyway, he has been showing his pro-opposition bias since he refused to recluse himself and predictably decided against TV3 and few other judgements against pro-UMNO bloggers.

Back to the amissing SOSMA, it seemed the enacted SOSMA failed to fulfill the role one of the 6 areas of constitutionally defined national security.

The First Schedule that specify the offenses of SOSMA failed to provide for offenses under Article 149 (1) (d) of the Federal Constitution as follows:


(c) To promote feelings of ill-will and hostility between different races or other classes of the population likely to cause violence;

This could have arise from the pressure to satisfy foreign-funded human rights activist locally without appreciating and acknowledging the myriads of local sensitivities that could lead to violence and threat to national security.

Yet Dato Najib had announced that the Sedition Act will be abolished.

Will not go any further or it will be giving away too much like expecting ISA revived. That will be like giving the Home Minister another shoe to eat and lead the Attorney General to private practise.

With so many events held to commemmurate the Tiger of Jelutong, careful what they ask for. He might return sooner unexpectedly.
at 5/02/2014 07:49:00 PM