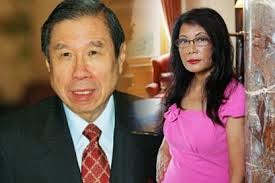 An interesting article in The Star:


High cost of a divorce

HAVING to go through a bitter divorce can be excruciating for all parties but when the person involved is a big corporate figure, then the dimensions can take on a different perspective.

Being in the public eye means greater scrutiny to proceedings in the court and the end result can mean a substantial loss of wealth for the corporate figure should the judgement go against him.

That scenario is at stake in the divorce battle between Tan Sri Khoo Kay Peng (pic), the founder of the MUI Group and chairman of Laura Ashley, and his wife and former Miss Malaysia Puan Sri Pauline Chai Siew Phin.

The fight in the High Court between the parties is to determine jurisdiction and domicile issues. The decision of the court will be telling as Chai has filed for divorce in London and the High Court there has agreed to hear the case on Khoo’s behest.

It seems as if Khoo is reluctant to want to the divorce to be heard in London. But the current scenario could end up in a highly irregular situation: both the courts in Malaysia and in the UK could end up hearing the divorce petitions of this case.

Lawyers say such a scenario has never happened before, at least in a case involving Malaysian and UK courts.

Chai has succeeded to have the case heard in London premumably because of the generous awards by divorce courts in London, which has given rise to the monicker Divorce Capital of the World.

That is why the court hearings in Kuala Lumpur are filled with claims and counterclaims on the areas of domicile with regards to where Chai resides.

If the case is heard in London then the sums paid out can be extraordinary. The record divorce payout is held by late Russian oligarch Boris Berezovsky. It was reported that he paid up to RM842mil (£160mil) to his former wife Galina Besharova in 2011.

The press in London argue that the settlement between Khoo and Chia could break that amount.

Impact on the businessman

The impact on any businessman going through a divorce would be the settlement amount he has to pay. If the payout is substantial, then it could burn a hole in his pocket.

“It has an indirect impact if the businessman has to sell his assets,” says a family law litigator.

“If he is a good businessman he can recover but if he is going to give half his wealth away, then it would be hard to do so.”

In Khoo’s case, Chai is expected to demand half of Khoo’s estimated RM2.3bil (£440mil) fortune, according to British media.

Khoo has a wide ranging business empire which stems from the MUI Group which owns a plethora of assets but the value of his wealth differs from what the British media says.

Even though the MUI Group is a pale shadow of what it used to be, after having been hit badly during the Asian financial crisis, it is still worth a sizeable amount of money.

If the divorce case is heard in Kuala Lumpur then the payout by Khoo will be far less than what the High Court in London will dish out to Chai.

The impact of a divorce on the businesses that are control or owned by Khoo is said to be negligible.

Out of court settlement

Khoo is not the first and he would not be the last businessman to have gone through a messy divorce.

In the late 1990s, Tan Sri Halim Saad was entangled in a divorce case with his wife Puan Sri Norani Zolkifli that was splashed over the news.

In the end, the divorce was settled out of court as was the divorce between Tan Sri Lim Kok Wing and his former wife Puan Sri Tessie Lim Kok Wing. It was reported that Lim agreed to pay RM11.65mil as part-settlement for his divorce and alimony to his wife.

Datuk Seri Mahmud Abu Bekir Taib is now embroiled in a divorce case with his former wife Shahnaz Abdul Majid who is seeking more than RM384mil in a seperation payout. The news of the court preceedings fed salacious interest among the public on the intricarcies of life of the powerful and wealthy.

Lawyers say it is for that reason that most divorce cases involving the rich and famous tend to be settled out of court as the last thing they want is to reveal private details about their wealth and lives.

“If it is a high-profile case, they will try to settle out of court. It is privacy that they want,” says a lawyer.

MUI was a counter we used to dabble in when we first started losing our savings in order to learn playing the stock market.

Back then, MUI was said to be associated with a certain politician. That was useful for Khoo who  seemed to be able to get whatever he wish for.

Khoo had a macai in a former ITM lecturer. He acts as his proxy in certain counters. However, the whole market linked MUI with this politician.

The politician was a high flyer from a young age. Still in politics, but rather dormant. These days he is heard to work himself through NGO and trying to revive the visions of Tunku Abdul Rahman. And he is being rumoured to try do another 916.

The politician's portion, said to be about 20% and allegedly kept with Khoo as proxy, could be revealed open in court should it be taken out for the balance to be divided.

That is unless the politician is not willing to have it made known and allow it to be foregone. It will be one expensive cost to maintain a name.

Does the politician happen to live next to at an elite address next to an elite recreational facility, ...

live a life in palatial and grandeur homes in kl, london and his home state, ...

present an ulu constituency, goes around showing concern for rakyat but his constituency is poor, and ....

with a different crowd, express high admiration for the colonial past master that made his constituent pòor.

Anything is possible said...

For all you know, it was not held by Khoo but other macai.

Who knows, Khoo's macai could be the ym politician's proxy.

Ladies & Gentlemen. It is alleged by a close associate that when the share price was RM 23 per share, all friends were encouraged to buy. And whilst on the road to riches, something happened in 1982 or 1983. It is in the Bursa records. What goes round comes around !