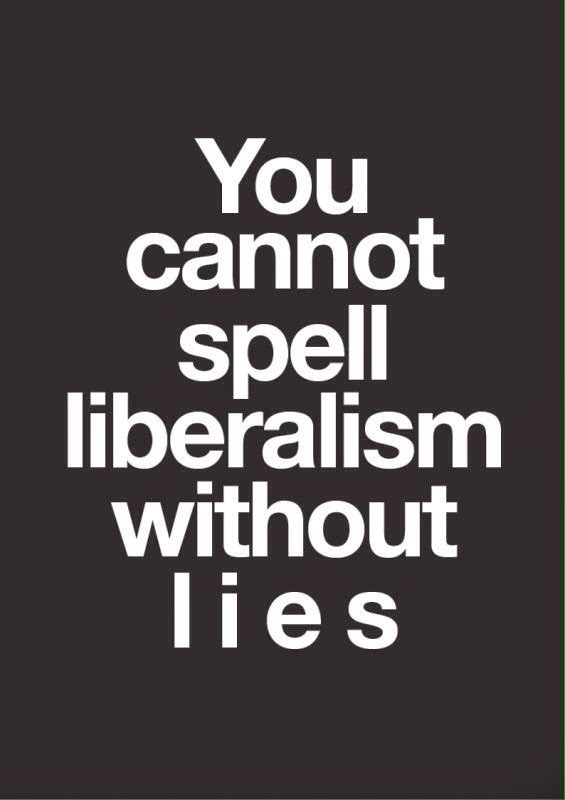 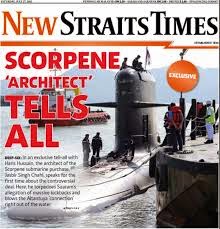 Couple of years ago before the 13th General Election, SUARAM was the suspected CIA-funded organisation made wild accusation of corruption and murder behind the purchase of submarine Scorpene.

When French court investigation documents were released to the public, it was proven that SUARAM's claims and allegations were an absolute sham.

All the claimed illegal money trail turned out to be fair and legit. 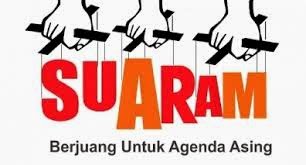 In their report, they claimed there had been "increased repression on freedom of expression, assembly and association".

All these activities are left unhindered.

SUARAM claimed detention without trail is back in business. One wonder which law can that be done? Under Najib, ISA and the Emergency Ordinance had been abolished but the repeal of the Sedition Act has been U turned.

So it means there had been progress in that department, almost a complete if not heightened provocation on racial, religious and sovereignty threat by the left wing liberals, and oppositions. Compared to 10-15 years, it is a significant progress.

SUARAM claimed there had been increase arrest under several new laws. If the law is broken and upon being charged, the court found them guilty, what is the issue? The important point is the process of law had been undertaken.

Is SUARAM saying laws should not be enforced?

How could they claim human rights had reached a new low? Are they saying human rights abuses are better when ISA was law under Najib's predecessors?

No Dong Zong and Hindraf 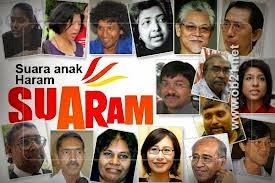 In their report, they had, in coordination with other parties, including MCA, The Star, liberal inside UMNO, opposition parties, left wing NGOs, etc, conveniently blamed it on Perkasa and ISMA. However, they conveniently left out groups like Dong Zong, Hindraf or any off-shoot of the group, or many others.

In highlighting major trends developing in 2014 that worries them, they specifically blamed  Perkasa and ISMA but blamed them for increase of racial and religious hate speech. Both organisations maybe blunt and fiery in their remarks but it has seldom deviated from the rights stated in the constitution. Seldom it is a reaction to provocation from other parties.

Why were no mention was made on the provocateur of the law and constitution, such as church groups, Dong Zong, etc.? It takes two to tango.

No fault of employer?

Another factor mentioned was "free falling of international rankings on trafficking of persons and worst country for migrant workers".

If it is the worst country for migrant workers, how come Malaysia is saddled with illegal immigrant problems from endless stream of immigrants slipping inside from Sabah to Johor and all the way to the Thai border.

Should any blame should be leveled at, it should not be the government but opportunistic businessmen and human traficking agents.

Any ill treatments should not be pointed any merely government officials but the employers. The authorities is just ill-equipped and under staffed to handle. 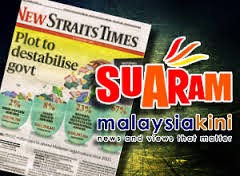 They took up issue on the Enforcement Agency Integrity Commission (EAIC) for failing to make the police accountable for corruption and abuse of power. Could they provide any verifiable data to prove EAIC had failed?

This issue is only expected to come because they are insistence on their proposed IPCMC and any other approach of dealing with the matter will never be acceptable.

Most organisation deal with disciplinary issues internally and external parties like MACC are brought in when corruption offenses done. Why should it be different with police?

They claimed intimidation by Home Ministry and ROS on few of the civil liberties NGOs aligned to them. How inconsistent they are when they could be insistent on NGOs like Perkasa and ISMA be denied freedom of expression?

Groups like COMANGO have been making wild accusation and slandering on human rights abuses in Malaysia at local and international forums but they had deviously denied any parties from Malaysia to explain the truth or at least, the other side of the story.

Finally on the international ranking, where are Israel, US, Angola and other outright human right offenders placed?

SUARAM will never give any honest answer to all these replies and inconsistencies. The reason being their intention is nothing more than to weaken government instutution and law and order to enable intervention from their foreign minders.

The press release below:

2014: A New Low for Human Rights Under Najib’s Administration

Suaram is pleased to launch its 2014 Human Rights Overview of Malaysia today in conjunction with the International Human Rights Day, which falls on December 10.

The Overview concludes that the year 2014 represents a new low for human rights in Malaysia under Najib’s administration, charaterized by the increased repression on freedom of expression, assembly and association, detention without trial back into business as usual, free falling of international rankings on trafficking of persons and worst country for migrant workers and epitomized by the prime minister’s infamous about-turn decision on his public promises to repeal the Sedition Act at the UMNO General Assembly.

Suaram wishes to highlight six major trends developed in 2014 that are worrying and warrant immediate actions from the government and the general public to halt their development.

Firstly, the increase of racial and religious hate speech by right wing groups such as Perkasa and Isma. Such incitements are no longer only coming from the government or ruling parties’ politicians.  Despite their incitement of hatred and violence, these non-state actors have enjoyed a free reign in threatening and intimidating other racial and religious minorities with almost total impunity under Najib’s administration. This is in stark contradiction to the moderation that has been preached by the prime minister at international high profile meetings. Suaram warns that if no action is taken to halt such development by the government, such trends will not only undermine freedom of religion and racial equality, but will eventually go out of hand and destroy the social fabric of the multi-ethnic, multi-cultural and multi-religious society of Malaysia.

Secondly, with prime minister Najib Razak caved in to the right wing groups, Sedition Act has been invoked arbitrarily to investigate or charge or convict 44 individuals in 2014 who were allegedly challenged the monarchy, Islam, the Malay special positions, the government and the judiciary when they merely exercising their right to freedom of expression. The chilling effects of the Sedition Act have harmed freedom of expression, which is crucial for a functioning democracy.

Thirdly, 2014 saw the return of detention without trial in full force, following the introduction of the Security Offences (Special Preventive Measures) Act 2012 (SOSMA) and the Prevention of Crime (Amendment) Act 2013 (POCA), essentially replacing the abolished Internal Security Act 1960 and the Emergency (Public order and Prevention of Crime) Ordinance 1969. In 2014, through to November, 31 people have been detained under SOSMA, bringing the total to 146 since SOSMA came into force. Another 116 were reportedly detained without trial under POCA in the first month of POCA came into force in April 2014 while no official figures was given by the government on those detained under the Dangerous Drugs (Special Preventive Measures) Act 1985. More injustice is expected to take place under detention without trial in the coming years.

Fourthly, the Malaysian police continued to operate with little oversight with the continued resistance of the government in establishing the Independent Police Complaint and Misconduct Commission (IPCMC). To make matter worse, even the ineffective Enforcement Agency Integrity Commission (EAIC) was without chairperson and commissioners between April and November 2014, effectively rendered the commission a defunct institution. Meanwhile, 13 cases of death in police custody were reported in the year through November, a figure similar as in 2013 despite the announcement of establishing of coroner’s court in every state by the de facto law minister Nancy Shukri in April. The institutional reform of the police force introduced under Najib’s administration has thus far failed to hold the police force accountable for corruption and abuse of power.

Fifthly, there have been increased attacks on the right to freedom of association of civil society and opposition parties, leading to the shrinking space and environment for organizing dissent. The intimidation launched by the Home Ministry and the Registrar of Society on the Coalition of Malaysian NGOs in the UPR Process (COMANGO), Negara-ku, Sarawak Association for Peoples' Aspiration (SAPA), Sisters in Islam (SIS) in 2014 is a continuation of such trend of intimidation of Bersih 2.0 and Suaram in 2013.

Finally, 2014 is a disastrous year for non-citizen in Malaysia as well. Refugees, migrant workers, and victims of trafficking continued to be treated terribly, a fact which was highlighted in Malaysia drop in ranking in the US State Department’s Annual “Trafficking in Persons” Report to tier three and its poor showing in the “Global Rights Index: The World’s Worst Countries for Workers,” where Malaysia was ranked alongside Laos, Cambodia, Qatar, North Korea, and Zimbabwe.

Suaram urges the government to take immediate actions in stopping and reversing the above six major trends of human rights violations. This should include, but not limited to, a thorough and comprehensive law reform of all outdated legislations; legislate the necessary law such as freedom of information law, anti-torture law and refugee law; ratify all major international human rights treaties; establish the necessary independent institutions such as the Independent Police Complaint and Misconduct Commission and Equality Commission; put in place a National Human Rights Action Plan; carry out nation-wide human rights education program; etc.

Suaram also calls on the silent majority of fellow Malaysians who love peace and harmony, who cherish human dignity and fundamental liberties, who value democracy, who treasure the richness of multi-ethnic, multi-religious and multi-cultural society, to rise up and speak out against human rights violations. The silent majority cannot afford to sit idle anymore while watching the development of our beloved country being held ransom by a small group of extremists.

In yonder years, the not so clever(?) East Coasters of Peninsular Malaysia carried out an annual ritual of launching a boat (or Lancang) supposedly containing all the feeds and things needed by the sea-spirits to appease them and thus restrain them from harming the fisher folks in their endeavour of 'cari makan' on the high seas. No records were kept if the 'rasuah' bore any results.
Today the supposedly elite and high class citizens of the 21st century Malaysia were carrying out the same rituals annually. Wonder if they were getting any result/rewards from their paymaster other than a pat on the back and maybe a cube of sugar?