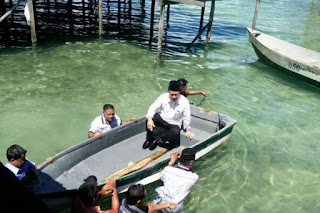 The takbir of Eid Adha is still being chanted. Sacrifice or qurban can still be the theme today.

Dato Shafie Apdal is not expected to have much impact in Sabah. He does not have influence outside Semporna. His support from KDM is limited. And to survive in Semporna for GE 14, he needs the Sakaran family blessing.

However, Shafie's naughty hands has extended beyond the thigh of a botox-ed celebrity. The same lucky number ploy he did in Tenom to attract crowd is applied to other districts. He gives out a car to every  districts he goes campaigning.

Sources claimed Shafie used his former officers in KKLW to sabotage his successor, Dato Ismail Sabri. The ploy is to seek exorbitant kickback from contractors at double Shafie's  "rate". It serves to cover-up his past misdeeds at KKLW with the story line things are getting worse.

So when three crews of a fishing boat off the tourist destination of Pom-Pom Island near Semporna was kidnapped for ransom on the eve of Eid Adha on September 11, it looked to be the signature of Shafie's hand.

Who knows Shafie's die-hard supporters in Semporna are willing to berkorban or sacrifice and do anything to get their bills paid. More so, it was reported somewhere the kidnappers were Filipino Bajau Laut.

Shafie claim he is a Bajau Laut but Sabahans tell me there is no such thing as Bajau Laut. They are actually Suluk.

However, do not be misunderstood. Suluk are found in Sabah and southern Phillipines. In fact, the first Governor of Sabah, Tun Mustapha is a Suluk. Shafie's uncle and former Yang Di Pertuan, Tun Sakaran Dandai is a Suluk.

It was sometime last week that there was conversation with a source in Lahad Datu of the possibility Shafie does such moves. We may have been prejudiced by the conspiracy theory talked about. However, it is unlikely of Shafie to do such ploy.

Shafie has the money to make an attempt to steal a couple of seats from BN. It is talked about that a certain billionaire under ransom is funding a certain operation in Sabah to assist. However, Shafie  could not ally himself with anybody, not even his former political party, USNO.

The various political warlords of Sabah, both within and without BN, do not trust him.


Neither could Shafie join Pribumi Bersatu.

Tun Dr Mahathir's name is tainted for designing the Project IC to control Sabah politics. As much as Shafie was defensive during the RCI, he knows it is suicidal in Sabah to be directly associated with Mahathir.

Seeing the presence of only "segelintir" at Mahathir's do in Ampangan, Seremban and the attendees could likely be imported, PPBM has yet to gather momentum. Need to see how the response in their future programs in other targeted states of Johor, Kedah, and Perak.

The handshake may have done the purpose to gempaq but subsequent development indicate the cooperation between PKR and PPBM is not consummated yet.

Mahathir defended his cooperation with Anwar as in no reason he can't be with Anwar after working together with DAP. The instruction to his lawyer, Hanif Khaitri to be in the NSC Act legal challenge serves the purpose to negotiate with Anwar Ibrahim.

Mukhriz confirmed it with his statement that PPBM hope to work with PKR. In response, Azmin Ali said any cooperation needs Anwar's blessing.

If A=B=C, then A=C. It is applicable in Mathematics but not politics. Azmin exploted it to give impression to PKR that Mahathir is kneeling to Anwar for help. He was also the conductor for the handshake orchestra.

This helped support a theory of RPK that Mahathir could not rely on Muhyiddin and Mukhriz for his cause and need a new set of "Musa, Tengku Razaleigh and Anwar." [read here, here and here]

What is Mahathir's cause? It seemed it is not just about fast track route for Mukhriz to be PM. We have a posting in waiting to expand RPK's theory.

In the meanwhile, Pakatan Harapan have been going about their ceramah. It is said Anthony Loke openly proclaimed Anwar to be next PM in the presence of Muhyiddin.

A pardon for Anwar is still far from sight and by the time he is out in 2018, he need to wait out another 5 years. Altogether 7 years to go.

But, since Ku Li decided not to quit, in which it was a decoy in the first place, Anwar has a slim chance of another comeback.

Taking all this into account, Shafie is unlikely to do something so risky as to act out a kidnap to discredit the agencies involved in Sabah security and built up anger among Sabahan against government.

Shafie better not politicise the security issues or he will end up like Tian Chua and Sivarasa.

On the matter of security, no games please. Not when it involves lives and tourism. Already, Sabah exco for tourism, Dato Marsidi Manjong is worried of the latest development to Sabah tourism.

So public safety is also serious business, especially under the high alert situation with new maverick Philipines President, Dutarte in his war on Abu Sayaf.

The Malaysian security personnel are in cooperation with their Philipines counterpart to stop any getaway Abu Sayaf terrorist from entering Malaysia.

While Duterte is on a mass "clean-up" of Abu Sayaf, there are rooms for concern to Malaysian.

There is a conspiracy theory widely talked about among Sabahan that in the past, certain corrupt officials within Philipines government may have a hand in the kidnapping. It goes way up and and they have the major slice of the millions of ransom money.

Recent reports claimed the Moro terrorist have had talks and maybe already in cooperation with Daesh or ISIS. Special Branch recently gave a statement on the existence of "lone wolf" ISIS suicide bomber. ISIS is a very very serious threat and not a laughing matter or for politicising.

Kidnapping, hijacking and smuggling have been serious security threat at the South China Seas. Part of the reason it attracts superpowers.

Recent development on a past incident is the Vietnam extraditing the hijackers of a Malaysian oil tanker last year. 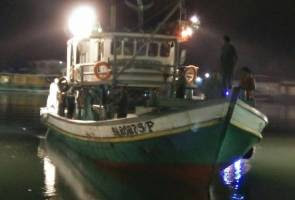 Nevertheless, it is a sigh of relief to hear the official statement that the three kidnapped fisherman boat crew are Filipino.

And, report also claimed these Filipino holds IMM13 document together with Census Document from from a special task force. They are permanent residents. Thus, they are not illegal immigrants.

Since they are not Malaysians per se and are their own kind, Abu Sayaf may have to release them without any ransom.

The fishing boat went out to sea at 4:00 PM in broad daylight and the kidnapping incident is believed to have happen at 10:40 PM at night.

Whether the crew are Malaysians or not, more so, PR, logically, the security forces should be in the know of their presence.

Out of curiosity, how many personnel was around at the eve of Eid Adha? How many left for the holidays?

How many left at the post on Pom-Pom Island? Was there people at the tourist destination post? 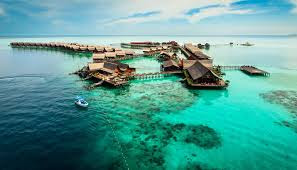 Looks like, our long planned second time vacation for Kapalai will have to be post-phoned indefinitely.