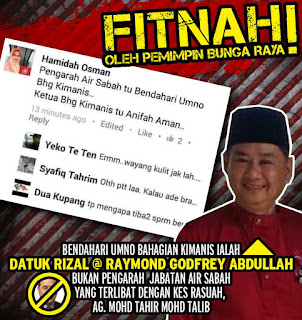 Was telling a friend involved in PPBM few days ago that Tun Dr Mahathir could be the raft for Muhyiddin people to float on but his people are short in many departments.

That is what you get for atracting langau from among golongan kecewa. When he was PM, Mahathir had good people around him but his current set are of low calibre.

Their political narrative are poor on facts, shallow propaganda, and pure wayang. Imagine, public image of PPBM are Khairuddin and Anina

The latest effort to implicate Dato Anifah Aman into the Sabah Water scandal is another fine example.

It was started by a pro-Shafie Apdal blog and the mastermind behind this attempt was exposed by another Sabah blog, Anti Fitnah Sabah as Shafie's Strategic Communication Director, Ismail Bungsy.

The blog, https://jalinluin.wordpress.com was responding to public accusation made against Dato Shafie Apdal by recklessly accusing the Sabah Water Director is UMNO Kimanis Division Treasurer here.

It is found out that the Suluk sounding name, Jalin Luin is a Shafie diehard and openly proclaimed his allegiance on his blog on blogspot: 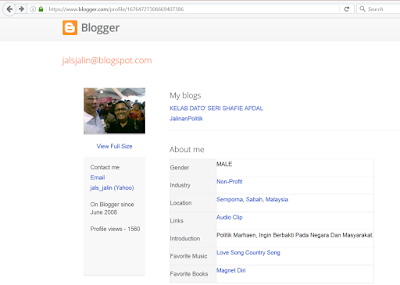 It is not too difficult to check the  current Treasurer, Datuk Rizal @ Raymond Godfrey Abdullah and Sabah Water Department Director are two different people. A simple google would have showed the Sabah blog is not telling the truth: 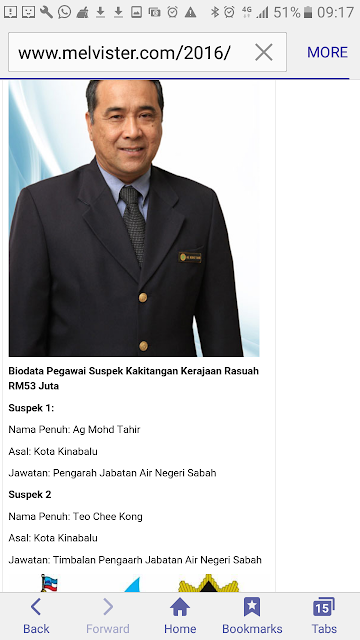 Yet they proceed to only apologise later. 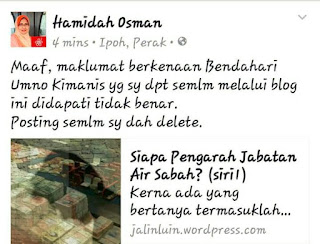 That is how shallow, irresponsible and reckless the current  Mahathir diehard can be.

It is becoming a daily affair to hear politically just inspired PPBM members swear and curse in anger on various social media groups and Facebook. When they lack any argument to debate, they will burst to mull the word, "Dedak!"

Despite denial by Shafie that he was working together with Mahathir, probably out of fear being implicated with his Projek IC, this episode indicate they are working together. It is not far off to suspect Hamidah and Hamizura was tipped off by Shafie's people.

They may have intentionally allowed the damage from the lie to perpetuate first before making their apologies. Because despite being debunked, Jalin went on with a new spin.

This time the clerk at Felda Sahabat in Semporna claimed that his earlier posting was made to attract attention but the truth is the accused Director and Deputy Director were originally from Kimanis.

By that unconfirmed association, he presumed they are working to raise money for UMNO Kimanis Division Chief, Dato Anifah Aman.

That would mean Anifah has a 100% control of Kimanis that everyone works for his political interest. How come he did not win Kimanis uncontested?

At the same time, Ismaily Bungsu created another fictitious spin in which Semenanjung PPBM members perpetuated another lie on social media: 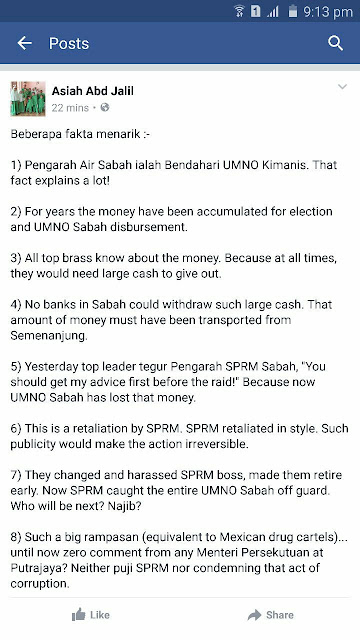 Nice try but game is over the moment your facts are wrong. Even if Anifah wanted to be corrupt, he does not have the opportunity to do so.

He is the Foreign Minister and surely water capital expenditure does not come his way. And he does not have the time to do so since he spend less than a week in Malaysia each month.

Shafie's people did a psywar strategy which was described by political analyst in the US media as "projection". Accuse others of one's own wrongdoing.

Donald Trump attempted to deflect his insults towards women by indirectly "projecting" Hillary as cheating on her husband. Mahathir and Anwar does a lot of "projection" game.

Shafie himself had done some "projection" on Sabah Chief Minister, Dato Musa Aman in the past. He used PKR operatives to play up Musa accepting political fund from a Sabah taukeh balak by the name of Michael Chia.

There was no case and both Hong Kong's ICAC and Malaysia's MACC exonerated him. It turned out Micheal Chia was Shafie's close friend/funder and the PKR operatives revealed Shafie as behind them.

The Anti Fitnah Sabah blog did not accuse and are not prejudicial against Shafie. They expressed the need for MACC to investigate and undertake the due process.

Why then are Shafie's boys in a state of panic or the Malay say, gelabah and his or new ally, Zainal Ajamain in a state of confusion?

This blog have highlighted it before but perhaps it is best to refer back to some old posting by Sabah Kini or their mirror sites.

There have been many grouses raised by the people in the Sabah interior on water problems. Money allocated but not delivered. Complain against KKLW can be found in abundance on the Internet.

For instance, on June 17, 2012, there is a statement by Citra Masadi, AMK Information Chief with regard to an allocated RM235 million rural water project for Sabah that was wasted by top-up abuses to alleged cronies of Shafie, Senator Datok Chin Su Phin and Datuk Peter Anthony for Tenom water projects.

This brought about a strong and lengthy response on June 22nd from BN MP for Tenom, Datok Raime Unggai. He blasted KKLW officials for not being at the site and raised issue on abuses in the close tender process.

The problem must be so bad and openly abused that BN politician cannot defend their own Minister.

This could have certainly be part of the reason Sabahan public accused Shafie and in turn, Shafie's boys response with a "projection" towards Anifah Aman.

Sources informed this blogger that the poor delivery or more precisely, non-delivery of water projects for rakyat in the interior have been reported to various authorities including MACC as far back as 2010-2011.

Why did former MACC Chief and top officials not pursue it fast enough and the perpetrators only apprehended in 2016 after much neglect to the rakyat?

Lajim also called for probe on other state agencies here. Yes, but should probe first on rural roads, electricity, solar and telephony services for rakyat. However, Lajim should stop gambling before talking.

His response yesterday was very official in nature. As advised by the civil servants, he will await report on the probe and the officers should explain themselves to MACC. And he reminded that all are presumed innocent until proven guilty.


“I understand that this particular RM3.3 billion worth of federal projects is under the Ministry of Rural and Regional Development, of which my ministry does not handle,” he said.

He said the allocations were directly channelled to the Sabah Water Department as the implementing agency without the Ministry’s knowledge.

The procurement of the projects as well as the payments were handled by the Ministry of Rural and Regional Development and the State Water Department, he added.

Why didn't FMT and MMO reported as above? Is it because former KKLW Minister is now with the opposition?

Shafie cannot continue to keep quiet. He should give a statement.

His response would be meaningful before continuing to Part 2 for the next posting on the water projects and tender process in Sabah.

In the meanwhile, read Seademon here.

2:72 And [recall] when you slew a man and disputed over it, but Allah was to bring out that which you were concealing.

2:26 Indeed, Allah is not timid to present an example - that of a mosquito or what is smaller than it. And those who have believed know that it is the truth from their Lord. But as for those who disbelieve, they say, "What did Allah intend by this as an example?" He misleads many thereby and guides many thereby. And He misleads not except the defiantly disobedient,

Disputing only bring out that which they were concealing.

Paying tax daily thanks to GST, which adds to monthly income tax payments deducted from salary, only to see the money pocketed privately rather than invested publicly...

The hypocrite looks for faults; the believer looks for excuses.
- Abu Hamid al-Ghazali

Imam Ahmad bin Hanbal (rahimullah) was asked about the correct meaning of this hadith:
'When you hear something form or about your brother, ascribe to it the best interpretation until you can no longer do so.'
He replied, Find an excuse for him by saying, "Maybe he said this, or maybe he meant such and such."

2:78 And among them are unlettered ones who do not know the Scripture except in wishful thinking, but they are only assuming.

6:104 There has come to you enlightenment from your Lord. So whoever will see does so for [the benefit of] his soul, and whoever is blind [does harm] against it. And [say], "I am not a guardian over you."

59:21 If We had sent down this Qur'an upon a mountain, you would have seen it humbled and coming apart from fear of Allah . And these examples We present to the people that perhaps they will give thought.

“The false revolutionary is the one who tries to change everything other than himself or herself.
Dr. Mustafa Mahmud

“If you do not know God except during good times, then you do not worship Him, you worship yourself.
Dr. Mustafa Mahmud

42:51 And it is not for any human being that Allah should speak to him except by revelation or from behind a partition or that He sends a messenger to reveal, by His permission, what He wills. Indeed, He is Most High and Wise.

42:52 And thus We have revealed to you an inspiration of Our command. You did not know what is the Book or [what is] faith, but We have made it a light by which We guide whom We will of Our servants. And indeed, [O Muhammad], you guide to a straight path -

42:53 The path of Allah , to whom belongs whatever is in the heavens and whatever is on the earth. Unquestionably, to Allah do [all] matters evolve.