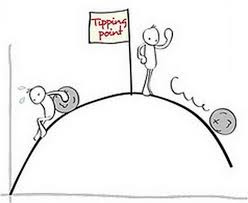 
In sociology, a tipping point is a point in time when a group—or a large number of group members—rapidly and dramatically changes its behavior by widely adopting a previously rare practice.

When Jeff Ooi was still blogging, he introduced this term to mean similar to pounding on a wall till it finally crumble. It was mean to be the BN wall.

Since Dato Dr Ahmad Zahid Hamidi re-introduced the name Kutty as Tun Dr Mahathir's last name from his father side of the family, there was widespread condemnation of him from the opposition who dismissed his argument that Mahathir lied of his family background.

But it did started critics of Mahathir's stereotype character as a "mamak". Unfortunately for Malays of Indian descent, they became a collateral damage of verbal abuses on social media.

The more relevant revelation on Mahathir is allegations of corruption, nepotism and cronyism that result in massive losses, leakages and bailouts to the national coffer, which ran in the hundreds of billions.

Should that not led to a tipping point to not return to the days of Mahathirism again?

Singapore's Strait's Times Reme Ahmad felt the strategy to expose his past will backfire. Nevertheless, his article exposed much o Mahathir's wrongdoings: 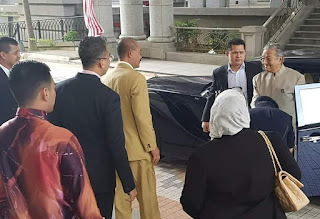 The strategy is one way to deflect attention from PM Najib's troubles but it could backfire.

Malaysia's longest-serving prime minister had faced down party revolts and street protests, and fought pitched battles to keep the economy humming during the Asian financial crisis.

Today, Tun Dr Mahathir Mohamad, in his new role as opposition chief, is facing again some of the financial and political scandals that he had papered over several decades ago.

With the Malaysian general election expected to be called within months, the administration of Prime Minister Najib Razak has dug up scandals that occurred during Dr Mahathir's 22-year reign between 1981 and 2003.

The government's Royal Commission of Inquiry (RCI) last month started its probe into the billions of dollars lost by Bank Negara Malaysia in foreign exchange speculation in the early 1990s. And talk is heating up of the formation of another royal commission of inquiry over the 1985 clash in Kedah's Memali village that led to the deaths of four policemen and 14 villagers.

There is also a buzz in Malaysia that more Mahathir-era scandals could be trotted out.

Rattling these skeletons is more than just an idle hobby for Datuk Seri Najib. It has manifold uses - to drive a wedge between Dr Mahathir and his new-found friends in the opposition; to jolt the memory of the electorate who remember only Dr Mahathir's plus points; and critically, to deflect attention from Mr Najib's own troubles.

Dr Mahathir, 92, has been at the forefront in criticising Mr Najib for the billions allegedly misappropriated from state fund 1Malaysia Development Berhad.

Mr Najib is also facing the ire of Malay farmers, who form a big chunk of government supporters, after corruption and financial mismanagement were unearthed in the national land development agency, Felda.

"He is trying to check Mahathir. It's about digging up the past and incriminating Mahathir," said analyst Amir Fareed Rahim at KRA political risk consultancy. "They (the government) are doing it because they acknowledge that Mahathir is a threat to the Malay ground."

The government hopes that these old issues would sway voters, especially fence-sitters, at the next general election, which must be held within a year.

The forex RCI was also intended to demonstrate how opportunistic, and hypocritical, the opposition can be. The inquiry was told that former finance minister Anwar Ibrahim, now in opposition and an ally of Dr Mahathir, knew about the huge sums lost then but kept mum.

Opposition veteran Lim Kit Siang, another new buddy of Dr Mahathir, had for decades called for an inquiry into the forex losses, but has today become critical of the commission's tasks.

The Memali issue, meanwhile, could gain brownie points for Mr Najib from supporters of Umno-friendly opposition party, Parti Islam SeMalaysia (PAS). Most of the villagers killed in that government-ordered raid on religious deviants were PAS members.

Indeed, there are plenty more skeletons waiting to be dug up.

The list of Mahathir era scandals is a long one as they happened during the go-go years of fast growth under a strong-willed leader pushing to modernise Malaysia using patronage politics.

In the 1979 to 1983 BMF issue, hundreds of millions of dollars in bad loans were lent out by the government bank to Hong Kong property players.

In the Perwaja scandal, from 1992 to 1995, a government plan to bolster the local steel industry failed, with accusations that millions of dollars earmarked for development went missing. Meanwhile, in the RM12 billion PKFZ scandal in the 1990s, alleged corruption greatly inflated the costs of building the regional shipping hub.

Political scandals included Project IC in Sabah where tens of thousands of identity cards were allegedly given out to Filipino Muslims in the early 1990s to change voting patterns, and the sacking and prosecution of then deputy premier Anwar Ibrahim in 1998 on what many saw as politically-motivated criminal charges.

According to the late Barry Wain, a former editor of the Asian Wall Street Journal who wrote a book about the former premier, Dr Mahathir squandered RM100 billion - or US$40 billion at exchange rates then - in the financial scandals. Most of the funds, he wrote, were lost to the forex scandal and the Maminco affair when Malaysia tried to corner the tin market in the 1980s.

Still, there are questions as to whether the strategy of demonising Dr Mahathir will work.

He is trying to check Mahathir. It's about digging up the past and incriminating Mahathir. They (the government) are doing it because they acknowledge that Mahathir is a threat to the Malay ground.

"Raising these could have a reverse effect as people might question the government's motive, as these are old issues that most don't remember any more," said political analyst Samsu Adabi Mamat.

Tun Musa Hitam, 83, who was deputy prime minister and home minister when the Memali killings took place, issued a statement on Aug 23 on whether an inquiry should be held.

"The RCI will receive more credibility if we establish it a few months after the (next) general election... by then the political situation would be calmer and we can avoid exploiting lost Malaysian lives for political gain."

The general view is that Dr Mahathir's no-nonsense approach in running the country - some call it authoritarian - endears him to those nostalgic for the 1990s when the economy expanded rapidly and Malaysia was better respected internationally.

"There was no GST during Mahathir's time that spiked the prices of everything, and jobs were easier to find," said Madam Salbiah Juraimi, a 45-year-old housewife in Kuala Lumpur.

The 6 per cent goods and services tax was introduced by Mr Najib in 2015 to boost tax collection. The GST and the weak ringgit are widely blamed for raising prices of everything from hawker food to groceries.

For others, past RCIs didn't result in anything much, so why bother with another one? The most recent RCI was in 2012 over the so-called Project IC in Sabah. Key witnesses including Dr Mahathir had amnesia and no one was punished - just like in past royal inquiries.

Reme's argument is voters is more concerned with the current as in the rising prices, unsatisfactorily explained 1MDB and FGV financial scandal.

If new development on 1MDB further clarified the alleged wrongdoings linked to 1MDB has nothing to do with Dato Najib and it is explained satisfactorily, the only problem left to be answered is alleged corruption and mismanagement related to listing of FGV.

However, the fact that MACC has remanded suspects and a matter of time to charge the alleged guilty ones, it could sooth some angry nerves.

The way pro-BN media social is talking, it looks as though it is a question of time Mahathir's mamak back stabbing behaviour to collude with Clare Rewcastle, DOJ's Loretta Lynch and FBI's james Comey will be exposed back. 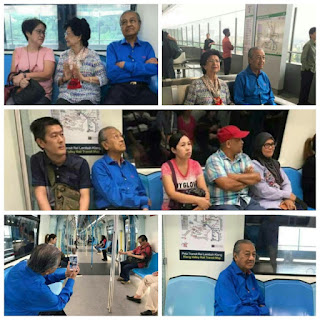 Maybe by that time, the tipping point on Mahathir will take effect. It will coincide with the RCI conclusion of the glaring BNM forex trading losses of RM31.8 billion and it's obvious cover-up for more than 20 years.

The narrative of the media social supporters of Mahathir to promote his achievements to build pyramids only highlight his lavish lifestyle, more suspicious dealings of his cronies and more details on the cover-up of his failed projects.

Marina's spin to promote an isolated picture of only Najib and Pak Lah at the Petronas exhibition and complain of TV3 removing KLCC backdrop in Bulletin Utama only brings out the questionable re-sale of land by Ananda Krishnan to Petronas for the KLCC site.

The deal saw the price inflated in multiples within months it was purchased from the Ampang Turf Club members. Such deal will need the consent of someone high up in government. More so, it is an open secret that Ananda is one of many Mahathir's major non-Malay proxies.

Maybe Reme Ahmad is no more living in Hulu Klang, thus not aware of viraled pictures of Mahathir being ignored by commuters during his visit of the MRT. It could mean the sympathy game by Mahathir to play dumb and invite critics may not be working.

Whether the tipping point is around the corner, parties within Pakatan Harapan led by Mahathir is facing internal quarrels and inter-party clashes. At least, three corner fights will be a common sight at the next General Election.

One can excused rising prices is part of any open economy, but it cannot be ignored and need be solved. Immediate suggestion would be to transfer out Director for Enforcement at KPDNKK, Dato Roslan Mahayudin.

Then one can talk of KR1M, strengthening ringgit, major fine tuning of Royal Custom pathetic implementation of GST and long term review of food distribution system.
at 9/06/2017 09:38:00 AM

KAHKAHKAH....U try toooooooo hard don't U to impeach Tun Mahadir
in the FOREX LOSS of 1986-93 whereas Nor Mohammad said, he was
the only person who made the decision and Tun Det was not involove.
In fact, Noor Mohammad said, he never inform the PM about his forex
activity. So now, U cannot say the loss of 50 over billions of 1MDB
is similar to the Forex loss. Jauh panggang dari api.
Kesiannnnnn kamu.