Countering Kua's “I didn’t know we had an Orang Asli prime minister!” 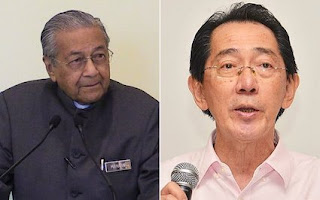 Tun Dr Mahathir claimed himself to be Malay. His Indian bloodline came from his Malayali grandfather, recently great great grandfather, from Kerala.

He maybe lying as it is believed it is his father, but he could be accepted as Malay. His mother is Malay with a Wan title, and constitutionally fulfilled other criteria of professing Islam, and following Malay customs.

In his blog posting to defend his presence at the Malay Dignity Congress, he was lambasted by Dr Kua Kia Soong for the use of the term indigenous.

Kua have been critical of PH government and Mahathir lately for not fulfilling his desired reform. But his remark has racist intent to manipulate and dispute the Malay indigeous status.

It is as though it is only relevent for Orang Asli.


A writer and researcher, Tun Suzana Tun Osman replied in a WA group and her FB to debunk Kua. It is reproduced below:

I wish to bring to attention recent development, whereby certain parties raised the issue of the indigenousity status of the Malays.

They highlighted about the indigenous communities as being more ‘tulen’ or ‘bumiputra tulen’, and alleged the Malay people do not fit the criteria as indigenous.

These parties I believe, are blind with our history or interpret in a narrow parochial sense.

I believe that they support  some quarters definition of ‘terra nullus’ for Malaysia in saying only the primitive people are qualified to be called indigenous or aboriginal and ‘tabula rasa’ or clean slate holds for Malaysia.

This is a grave and erroneous fallacy.

Let us start with the definition, the word indigenous; as per Oxford Dictionary it is defined as “occurring naturally or native”, thus it can be synonymous with the phrase “native”.

In Malay, the definition is more nuanced, indigenous is translated as “asal” or “occuring naturally”, however we have another word, “watan” which is translated as “native”. Thus the slight difference in languages seems to be root of the argument.

For the history of the region, we shall look at the Peninsular Malaysia, Sabah and Sarawak. 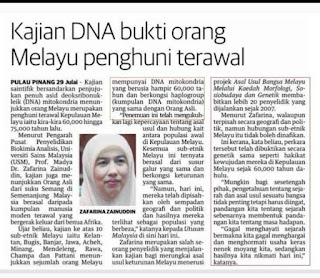 The first inhabitants were the Proto Malays, settled here at least 2500 BC. They were the ancestors of various aboriginal tribes of Malaysia like Jakun, Semua, Negrito and others.

They were also known as “Melayu Purba” or “Melayu Bukit” by the local Malays. They spoke ancient Malay and held animistic beliefs and have rudimentary agricultural experience.

Later some of these Proto Malays interacted with outside influences, such as Arabs, Persians, Indians and the Chinese, and they became Deutro Malays.

It was recorded that from around the first millennium AD, the Deutro Malays inherited the settled life, in kampongs;  proper agricultural experience; livestock and crops;  progressing in rich cultural experience; with excellent maritime culture and a sophisticated system of writing, belief, trading and statecraftship.

Various indigenous kingdoms sprout during this era, kingdoms such as Malayur, Langkasuka, Kota Gelanggi, Old Kedah, Old Pahang as well as Seriwijaya. They spoke ancient Malay and considered native kingdoms of this region.

With the advent of Islam and the Islamization, which covers the whole maritime South East Asia, has become the Malay Realm or for some parties, the Malay Archipelago.

The people of both sides of the Straits of Malacca, practised Islam, employed the Malay customs and used the Jawi alphabets.

In the olden days, to become a Muslim is to become a Malay. An Orang Bukit on becoming a Muslim, joined the bigger Malay society. This same custom is still in practise today in Brunei.

It is interesting to note for Negeri Sembilan, the clan of some traditional Chiefs and the Yang di Pertuan Besar are Biduanda, originating from the Jakun  tribe. How much more indigenous and native as you can get? 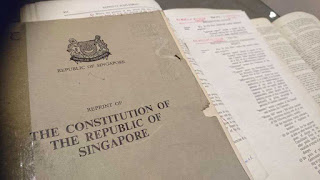 I wish to end this article with a very interesting fact gleaned from  Article 152 (2) of the Singapore Constitution as stated below, noting that Singapore was once part of the sultanate of Johore and later, Malaysia:

“The Government shall exercise its functions in such manner as to recognise the special position of the Malays, who are the INDIGENOUS PEOPLE of Singapore, and accordingly it shall be the responsibility of the Government to protect, safeguard, support, foster and promote their political, educational, religious, economic, social and cultural interests and the Malay language.’"


In conclusion, I hope this brief riposte on the issue, will  rest the matter of Malay indigenousity  status in this country, once and for all.

Yup, she’s right about 152 as what stated in this:

But the argument stays and stand on how it been deceit. Just use the terms meritocracy and subjectively keep putting higher invisible ceiling. Once they are in power the glass ceilings shall be there to address the right to climb even though you’re well qualified. How many Muslim malay doctors in Singapore? The president of singapore after 47 years since yusof Ishaq was. Then came Halimah. Even that the noise of meritocracy are been howled like a dog barking when intruder comes.

As said, once you are in power they will start their menace and spin how to suppress. Make sure only their kind shall be on the higher scale. So Cuba lah nak buat ikut Malaysia Baru.