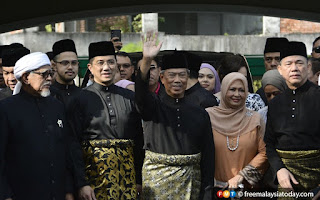 Till the politics stabilise, it is pointless to discuss or talk of anything else.

Over tea, two foreigners next to our table was asking for comments on politics. Guess he was too eager to express his view. Before we could reply, he gave his 10 second description.

"It is a relay race where someone was supposed to pass the baton i.e. to Anwar but he didn't want to. He had his sight on someone else further away i.e. Mukhriz. Before he could run to pass it, the someone dropped the baton".

The foreigner's comment was almost there, but he did not know that there was no "supposed passing of baton by that someone" to Anwar.

Not with Anwar's reliance on DAP support. PH government fell on merely the no DAP in government crying call and them shooting their own feet, including dropping the baton.

Obviously, the foreigner was overly impressed with Anwar's microphone skills.

Majority Malaysian Muslims have scrutinised him under the microscope that no sermon can convince his moral issues and questionable ideological stand is otherwise.

Since Muhyiddin took his oath of office, the usual theatrics, fake news and false allegation of the former opposition turned opposition again is back in action.

The stunt pulled by two of Muhyiddin's officers to do a strange first speech to specifically mention his criteria for Minister followed by shaming Zahid in court has caused much restlessness in UMNO on the sincerity of Muhyiddin.

The first day is usually only press conference thank you, confidence building statements and yes, we will study or look into this or that.

If Muhyiddin is on the ball, he would mention his priorities will be security, restoring law and order (or any better word than restore), and political stability. Hevshoukd have kept his selection criteria close to his chest.

It is as if some strange hands other than Muhyiddin tried to deny Zahid the position of Deputy PM. The presumption is the relationship between Muhyiddin and Zahid is cordial.

PPBM wants to be in the driver seat at the Federal level, Perak, and Kedah. The two seat party almost hijacked the Melaka CM position through trickery. If not for Sultan's advise, they would insist them to hold Johor MB position.

The arrogant PPBM claimed they fensed a slanting coconut tree but the fruit falls on other people's land.

By the end of the week, voices within UMNO and PAS showed signs of reluctance to be part of cabinet.

Zahid explicitly offered not to be part of cabinet. Though agenda-driven NST seems to promote Hishamuddin or Mohammed Hassan, Muhyiddin has to be careful in his decision for DPM.

Apparently, talk is there were prior agreement for DPM I to be given to Zahid and DPM II to Hadi Awang.

Breaking this agreement could put Muhyiddin's administration on a shaky start before facing a possible vote of no confidence to come on May 18th Parliament seating.

More so, it is strange to see PPBM holding both the PMship and "Opposition Leader" in Parliament.

Muhyiddin himself is not assured of his position in PPBM as Mahathir remain its Chairman. He could take on Mahathir or seek truce.

Muhyiddin and Azmin are being dubbed rogue and traitor.

They are being accused as making the someone not pass the baton to Anwar, dropped the baton and picked it instead to deny Mukhriz the baton.

It does not seem to be a mere act. But the awkward arrangement of PPBM makes the whole episode looks to be a ruse.

Rouge or ruse, it depends on how Muhyiddin announce his cabinet appointments. He could do without a DPM or keep it vacant or appoint one outside party hierarchy.

Whatever his decision, it will determine the fate of his administration and few states.

Rouge itu make up.
Rogue is the word you looking for.