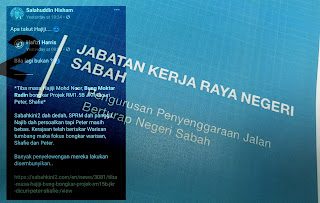 Its only 2 days after Dato Hajiji Mohd Nor took his pledge as Sabah Chief Minister and a day after an equally tumoultous conclusion prior to pledge taking by members of the consensus-ly agreed Sabah cabinet to the TYT Sabah Governor.

Sabahkini 2 has already rervived the issue of the RM1.5 billion road maintainence contract from Sabah Road Work Department (JKR) yesterday. The election turning news portal that was years ahead of politicians in the fight to bring Dato Seri Shafie Apdal down wasted no time to whip the new cabinet back to this contentious issue.

The federal constitution has provision that obliged the federal government to annual allocation for maintainance of roads according to a prescribed formula.

Sabahkini2 was the portal that first revealed  the massive swindeling of fund for public's basic needs for proper roads happening under the eyes of former Chief Minister, Dato Seri Shafie Apdal and his Minister for Infrastructure, Peter Anthony in 2018.

The contravention on the constitution by Shafie was re-exposed again May 2020 by Sabahkini2. The matter arise from the second series of Chief Auditor Report 2018. Two companies closely linked and practically crony to Peter was highlighted, including possible money trails.

Words going around is that the companies are paid regularly on schedule without details on the voucher instead of on claim basis. It means money was paid for no work done. A common method of swindeling money meant for public works in third world country.

Sabahkini2's persistence seem to be in-sync with sentiment on social media as there are commentators giving hint new CM Hajiji will be soft and not have the guts to undertake investigation and pursue on the perpetrators.

One can suspect the ground knows more than that as there were more than meet the eyes in the incident, in which Home Minister, Dato Hamzah Zainuddin was heard and widely reported on social media to interfere and persistently demand Dato Bung Mokhtar not be given to the agreed positions.

It was agreed during pre-election negotiation that UMNO was to be given the CM position should it holds the most number of seats and subsequently conceded to consensually agree Bung be given the second best option of Deputy CM 1 and Infrastructure Minister.

When the time comes to read the pledge, Hamzah interfered again and again.

Knowing the feisty former street fighter Bung is, one should not be surprise he could finally lose his patience and ready himself for a slugfest in the ceremonial hall.

Hamzah had repeatedly negated on several promises and agreements in the BN-PN pact in exchange for the concession given to PN by BN and systematically sabotaged BN's campaign to lose out 12 seats by pitting other PN component parties or independent proxies.

Bung was accused of being weak in his negotiation, but sources close and present at the scene revealed that he was threatened to the extent that the execution of the threat of arrest was to be executed while the state election campaign was going on.

It could have jeopardised BN's chance and also PN's. That made Bung relented with conditions agreed. 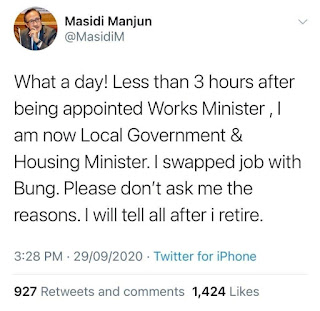 The long and short story, Bung eventually got the consensually agreed positions after Hamzah dashed out of the room in fear. 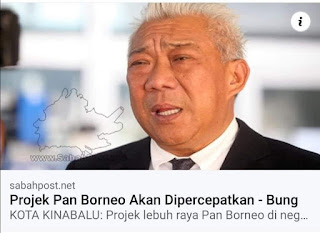 Social media reported that Dato Ahmad Zahid threatened to have BN pull out of government within one hour for the last renegade. A source within UMNO confirmed the announcement was to be made concurrently in Kota Kinabalu and Kuala Lumpur. He had personally prepared the statement.

It maybe the reason Muhyiddin had to change his mind from holding the snap general election after a win of the Sabah snap election said during the campaign following questions from media. 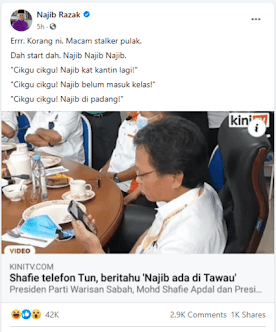 Like Shafie to Mahathir, do not be surprise he cry baby to mengadu (report) the incident immediately to Prime Minister Tan Sri Muhyiddin.

Eyewitness said the state assemblymen across the partisan divide were increasingly annoyed by the interference by a non-Sabahan representing and given mandate by Tan Sri Muhyuddin to deal, and decide but uncustomarily over-ride agreed decision.

Why did Hamzah interfere?

Did Hamzah made the decision to interfere in such uncouth and gung-ho manner out of mere political consideration?

Hamzah is not sufficiently conversant on Sabah affairs and far from being meticulous in his actions albeit the completely shameful failure of the coup d'etat on Shafie's Warisan government. It is unlikely he is aware of the nuances of the position.

Is someone too afraid Bung would know the crap happening in the Sabah Work's Department in particularly road maintainance contract?

Bearing in mind, prior to the fall of PH government, PPBM is inside PH and beckbencher for the Warisan government. 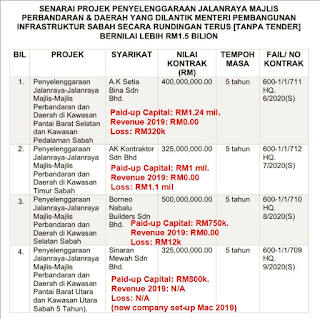 During campaign, Dato Najib raised in his FB on September 18th to demand answer for the contract and this named four shady companies. He reminded of Peter's threat to sue Sabahkin2 but failed to do so. Following the silence of Warisan, Najib raised the same constitutional infringement again three days later.

In case someone forgotten, Najib was Prime Minister and Minister of Finance for 8 years. Does he know something more than what common Sabahan folks and politicians?

Hajiji should not be pulling any brakes on the investigation of the road maintainence contract. This is Sabah's rights guranteed under the federal constitution and more binding the Malaysia Agreement 1963.

Otherwise, he could be accused as the person instigating Hamzah's buffonic act to interfere in Sabah matter and renegade on promises after promises made to UMNO. If it is not Hajiji himself, someone else may have directed Hamzah to be an @$$h*le. Who?

Hamzah is not that clever ... Documents are scattered all over.