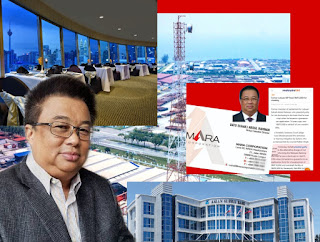 Haresh Deol mentioned in the last posting, Did MARA Corp's Director Megat Shahriman leak story on CEO garden leave?, commented in his tweet about MARA Corp not responding to his earlier enquiry. They refused to answer whether Suhaili was appointed Executive Director.

He linked to his December 3rd report here and there was a piece of information mentioning a staff of MARA, Noor Irwan Marmin is now acting CEO. It is strange to have an acting CEO when the there is still a CEO around and the enquiry has yet to commence.

What the hell is an ECB? Is this a Board managed organisation or planned to be Board managed? How many layers of onion to run a MARA Corp with only 20 staff claimed improperly hired by Dato Badlisyah Gani? 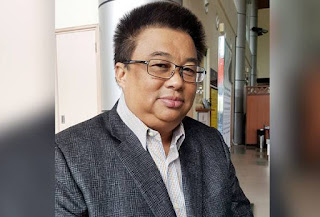 For the benefit of Haresh and to clear the Minister's name, most likely the letter sighted could be merely Latiff's agreement to his appointment subject MARA Council endorsement. MARA Council rejected and it is a good decision.

If there is a CEO, why would there be a need to have an ED in which again, with only 20 staff around?

The hiring of highly qualified and experienced corporate personnel would indeed meant that MARA Corp is not merely a holding company. Politician Suhaili is not cut out to lead such a highly professional team.

As Chairman of Labuan Asian Supply Base, in which he was recently re-newed (read Sabahkini2 here), he could do to chair meetings and ensure the interest of Labuan is taken care. But in executive role at LASB or even at MARA Corp, it is beyond him.

More so, he has a chequered past at MOCCIS. There is a source giving/given full detail on what happened. It could be from the Ministry concerned but it may not. 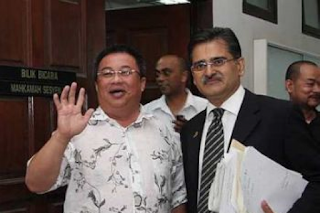 A Sabah source claimed he was acquited by the Kota Kinabalu High Court for the Bank cheating charges. The Star report here confirmed so but AG planned to appeal against the acquital in the Court of Appeal in 2010.

Borneo Today reported in 2011 here that COA overturned High Court judgement against Suhaili for "failing to declare his bankruptcy status in a bank loan application more than 15 years ago". 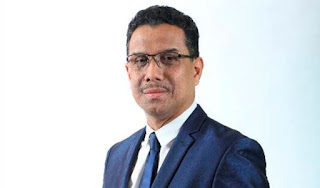 And, has Suhaili been released from his bankruptcy?

If he has, did MARA Director General, Dato Azhar Abdul Manaf do a due diligence and investigated on how he cleared himself from being adjudicated bankrupt?

Blogger Captain M reservation here against Badlisyah's financial predicament back then was his financial situation could compromise his position as CEO. He was justified back then but the same argument should apply against Suhaili. Who paid to clear his bankruptcy and what is the form repayment?

Captain M was gracious enough to update his blog here to reveal the legal document that bank had withdrew the Judgement in Default against Badlisyah.

The document was revealed here and it was leaked by a legal firm. It could be ex-MRSM lawyers, such s mercurial Mahathir's lawyer, Hanif Khatri or former MARA Council member, Ahmad Bazlan or Hasnua Merican that represented Sirul and is Selayang UMNO Division Head.

It does not matter who because one phone call to any lawyer friend could get the latest document from the references provided by FMB here and WApp back in pdf copy. Thus the libel warning.

This highlight a problem with DG Azhar. Unless Azhar is a Yes Minister-type of civil servant, he should be the person advising the Minister on whether Suhaili's appointment was suitable. Had he been so, he would have double check too and be more bureaucratically difficult.

Captain M blamed BTI Search here, but it was Azhar that slackened. Need to do background check with Pak Yem, who happen to be one of the student during a talk given to an MBA class. 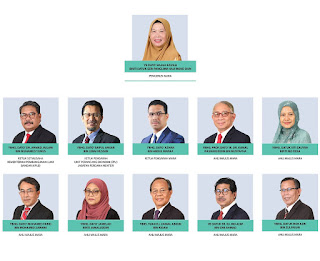 For that matter, Azhar's advise to the Minister on the appointment of the Board of Directors of MARA Corp and possibly, new members of MARA Council is suspect. The level of competency of members is less than adequate and seemingly clueless.

The incompetency is so apparent that the new blog Free Malaysia Baru here seemed to not know head or tail on the issue. Sensed it is written by a reporter.

Unless she does business reporting, reporters are art stream students whose sense of numbers, are out of the window. The writer here is incapable of interpreting, whether RM20 million wage bill over two months of Badlisyah's presence, make sense or not? Does the 56 executives include those in the subsidiaries?

Do your fucking maths, babe. 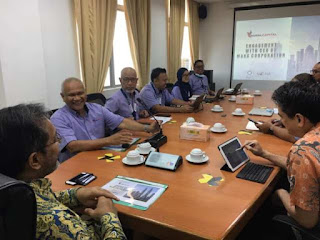 Psywar pun tak tahu buat. The written Malay is so colloquil that it is probably written by a non-Malay. This picture is a dead giveaway of the identities of those involved. Captain M was far better than this. That's why he is on this blog's blogroll.

Seriously, MARA and MARA Corp were empowered for socio-economic and economic development, respectively. It is not meant for entrepreneurial development per se, in which Tun Dr Mahathir myopically narrowed its role wrongly by renaming the Ministry for Entrepreneurship.

The members DG has lined up and advised Minister to appoint as BOD members prior to hiring Badlisyah are business developers or businessmen and not economic developers. Same with previous MARA Council members.

There are appointees not with relevant CV, not sufficiently competent and had fake degree. Thus, they failed miserably to understand what is strategically going on in the successful subsidiary and made snide remark with ignorance, arrogance and in uncouth manner.

Not to mention, those of questionable integrity such as Suhaili. But he is not the only one.

There are those in pursuit of business interest, conflict of interest, and even with the interest to take over over certain asset of MARA Corp. There is even member of a certain committee was once fired for being caught red handed stealing client's deal. One member in MARA Council has a case that is prosecutable as a criminal case and the market knows.

There are numerous appointments that are in contravention with the MARA Act and various documents of incorporation. This murmur is loud within the puzzled lower MARA echelon.

Someone up there did not do their homework. 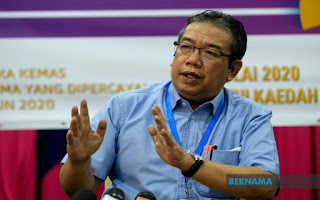 As MRSM and MARA product, our feelers are everywhere in the organisation. Be them fellow MRSM, MRSM teachers, MARA oversea scholars, former MARA officers, activists, corporate and politicians. The information are accessible.

We unequivocably cannot stand this nonsense and will get down to the bottom of it.

Latest talk going around in MARA that there were table banging, paper throwing and set-up-whack down routine happening in MARA Corp Board meetings. Some characters deserve to be thrown off KLCC from Mahathir's former Petronas office.

The fact that it has reached this low level and now slowly coming out in the open, it means Minister need to intervene and set things straight. Any politician worth any grain of salt could anticipate such problem and preempt from it getting any worse.

Heads must roll for a properly qualified and experienced team to be put together to steer MARA and MARA Corp. It would be a shame to have Council and Board members inferior to the team assembled in MARA Corp. Using salary issue to throw someone out is petty and technically incompetent. 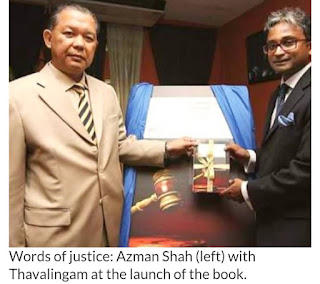 If there is any truth that Dato Thavarajah Thavalingam is in the fray, it means it is a fixed up job. Malaysian Employers Federation do work for employer's interest. Everybody in the industry knows he is no Industrial Relation man, but gun for hire to bump people off.

MARA is an organisation that has done more for Malays and Bumiputera of Sabah and Sarawak than any others for the immense contribution to the country from the Bumiputera human resource it has developed.

It must not succumb this low. A screw up at MARA can result in a bigger backlash to the government from Malays particularly than that by PH for screwing up the turnaround of Tabung Haji. PN government dare not call for RCI that they could use to crucify UMNO politicians.