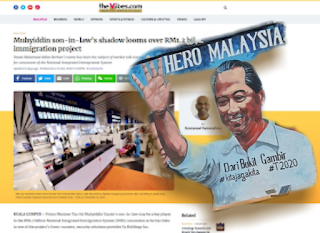 theVibes.com confirmed the suspicion this blog had in August on the involvement by the family of Prime Minister Tan Sri Muhyiddin in the RM1.2 billion National Integrated Immigration System (NIIS) tender. [Read here and here].

As early as June 2020, Focus Malaysia here have been enquiring on who is behind S5 System, but only managed to trace to a probable proxy, Syed Muhammad Hafiz.

He is linked to an off-shore and overseas company, NSA Technology (L) Inc., which in turn is linked to an entrepreneur Johann Young. The connection to Muhyiddin is indirect and many more steps to be legally relevant.

Son-in-law
Adlan  is the same son-in-law believed to be working albeit in partnership with YTL subsequent to them being awarded 1Bestari-net.
His aggressiveness was a concern to those within Muhyiddin's inner circle then when he became part of the family. This latest revelation indicate the concern was mere excuse or justification to cover for the boss then.
There is also the existence of Nexbis, which have long been active in securing government IT contracts in on payment system, and security related. The talk is S5 office is within the vicinity of Nexbis office.

Company filings show that Datuk Muhamad Adlan Berhan, married to Muhyiddin’s daughter, Nabilah, is a shareholder of Agathistwo Jia Sdn Bhd. He was a director of the company, too, but resigned on September 21, 2018, yet remains among its owners.

The other Agathistwo Jia directors are businessmen Lim Beng Guan and Choong Khoong Liang. Lim, also the founder of boutique financial house ZJ Advisory Sdn Bhd, is the sole director and shareholder of Avocat Sdn Bhd, which is among the shareholders of S5 with a 3.62% stake. Other S5 owners are MyEG Services Bhd’s subsidiary MyEG Capital Sdn Bhd (10%), S7 Holdings Sdn Bhd (76.38%) and Merrington Assets Ltd (10%).

In this blog's August 8th posting, Are PM's son, PPBM behind frontrunners for RM1.5 billion IIS tender?, MyEG is believed to be a frontrunner and naturally has technical tie-up with S5.

Another potential front-runner mentioned is Datasonic, which could be potential platform for much said interest of PM's son and/or son-in-law in the area of biometric and payment system.

Not only mentioned by The Vibes, one short-listed bidder, whose no more in the running, claimed it would likely go to Iris and its share price has boomed!

This was anticipated by our August 17 blog post, Young politician intermediary in Iris's NIIS tender.

Could it be Dato Rozabil aka Ben, who is believe to collaborate to fix Dato Dr Ahmad Zahid Hamidi with a Al Capone-like diary as so-called evidence?

"....S5 Systems is the leading partner and the most trusted consultant in both IT and security ­fields, including identity and documents security, law enforcement, intelligence monitoring, citizen and foreigner management, transportation, cyber security customs, immigration and border control as well as mobile, banking and health industries."

From the awards and accolades received here, the company have been around before Muhyiddin became Home Minister in 2018.
Cooincidently, when Muhyiddin was DPM, he was assigned to Digital Malaysia at the time Najib was focused in the main areas of interest undertaken by Pemandu. Its not a surprise he pushed to increase digitalisation in his first budget as PM.
Putting two and two together, any observer would assume Prestariang's concession was cancelled due to political reason. Seeing the opportunity, someone in the family of the former Home Minister moved in.
Sources claimed cabinet have made a decision but it has to announce. Perhaps, Mak Enon need to prep the market. The political cyertroopers of Azmin, Zuraidah and Ratu Naga need be ready to face the onslaught.
More so, the PN political leadership took opportunity of the pandemic to reward themselves with direct nego contracts for political funds.
Government no money? 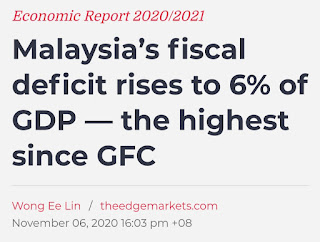 Before Prestariang's immigration system was implemented, there was an on-going system with a US-based technology developed by a Malaysian (let's called them Mr X).
It could resolve the immigration system and prevented the current massive leaks at the border.
But, typically some Little Napolean, whose conflicted and has personal interest with a friendly company, manouvred to cancel the contract.
Usually, insidious hands among civil servants are reluctant for comprehensive and full proof solution. It has no allowance for intervention and beneficial leaks.
Murmur among the committed frontrunners is that they are afraid of being awarded the NIIS contract since they sense government have NO MONEY and payment will be difficult.
Does S5 has the solution? 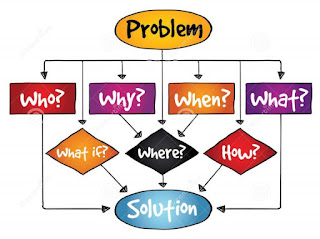 However, there is a another bigger issue coming. A source claimed S5 may not have the solution and still need to scour around for one like any SI company.
More so, with the contract estimated value reduced from RM1.5 billion as earlier reported to RM1.2 billion, the comprehensive solution may not be achievable. It beats the purpose of solving Malaysia's porous airport, port and border points which lacks interconnectivity and instant capability for checking.
The solution is with Mr X, and the technology and specification hardly cost as much. However, Mr X may not be on friendly mode since their bill running in hundred of millions, to say the least, have not been paid.
The same source claimed Prestariang could not get their project going because of copyright issue.
Mr X is toying with the idea of suing the government for copyright infringement. It will run in the multiple to the amount claimed from government.
No Chief Justice Tengku Maimon and Attorney General Idrus Haron could save the government. No delay tactic to buy time and squeeze Mr X financially will work. The cost of the lawsuit will not be borne by Mr X. The hint is it will be beyond their jurisdiction of CJ or AG.
If it happens, the fear of the frontrunners will realised itself. Government will surely have no money.
And, Mr X is not the only party suing the government. One judgement could cost government in the billions. The past sins of Atoq coming to haunt Abah.
at 12/29/2020 10:15:00 AM

What is wrong if the son-in-law of a PM to participate in an open tender for any govt projects? Do you mean every member of a government officer must go hungry and be poor if his or her father/mother/siblings are in the government?

It's called Conflict of Interest

Open tender? are you sure ?