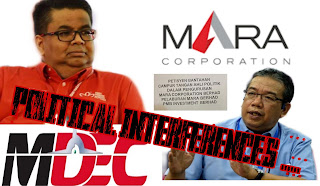 Malaysia Reserve broke the news yesterday of MARA will have to pay heavy compensation to dismiss Dato Badlisyah Ghani as MARA Corp CEO and 20 team leaders hired to developed the sectors indentified in a paper presented to the previous Prime Minister by Majlis Perundingan Melayu.
The seriousness of PPBM-dominated PN government and the Minister-in-charge, Dato Dr Mohd Latif Ahmad will be in question for this crucial Bumiputera initiative. In their run-up to the 14th geneal election, PPBM had heavily criticised Dato Najib Tun Abd Razak as foresaking the Malay development effort in his national agenda.
Apparently, the Board of Directors of MARA Corp made a decision, but kept mum to await MARA Council decision, in which a member, Dato Jamelah Jamaluddin and MARA Corp Directors, problematic Dato Suhaili and uncouth Dato Seri Megat Shahriman are pursuing for dismissal.
More on them to come.
If the dismissal goes through, murmurs on the ground is that one money generating subsidiary will see a major exodus for greener pasture and it could financially crippled MARA Corp. As it is, there was a petition by staff demanding no political interference in PMB Investment.
Its been awhile since this blog gave any update on MARA Corp as information are being gathered to expose an insidious political motivation and unscrupulous intentions behind the moves and political interferences.
This morning yours truly was alerted by another mass resignation at the Malaysias Digital Economic Corporation (MDEC) led by the former Political Strategist of PPBM and key Tan Sri Muhyiddin Yassin man, Dato Dr Rais Hussin.
MDEC
Free Malaysia Today reported Rais Hussin unconvincing denial:

No mass resignations, says MDEC
FMT Reporters - January 20, 2021 7:19 PM
PETALING JAYA: The Malaysia Digital Economy Corporation (MDEC) is not facing a mass resignation of top executives, with 16 resigning en bloc. Instead, its chairman Rais Hussin said, it was normal for people to resign at the end of the year.
Rais said the resignations were on different dates and for various reasons. “No, I don’t think (there’s an) en bloc resignation as (they are on) different dates, (for different) reasons.
“There are people who have resigned but not 16,” he told FMT, after a series of tweets claiming that 16 executives had resigned en bloc from MDEC.

Raid said it was normal for staff to resign at the end of the year, or beginning of the year as they look for new opportunities.
He was responding to the tweets by Ahirudin Attan, who runs the blog Rocky’s Bru. Ahiruddin had asked Rais: “Is it true 16 senior execs from MDEC have tendered their resignation en bloc?”.
Rais, who was appointed to the post in June last year, said one senior executive was joining the regional office of Sony. “Others change career paths and so on.”
Rais added in any organisation there are challenges and “things we need to change and improve. There is no crisis.”
He said that when change is pushed, staff may either embrace the change, adjust or disagree by moving on.
“When people move on, others join, MDEC continues,” he said, adding that there are a lot of talents gravitating towards them.
In Nov 2020, MDEC in a press release said it was undertaking major restructuring.
The press release had said that in these unprecedented times, accelerated by the Covid-19 pandemic, change was inevitable.
“Recognising that digital transformation and adoption is crucial to capitalise on new opportunities, it announced several new strategic areas driven by a newly set-up MDEC Operating Council.
The areas include strategy, transformation, artificial intelligence, adoption, investment and skills.

Rais's reply to deny of any en bloc resignation and it came at different dates and reasons does not come off as convincing.

It is not normal for staff to reign at the end of the year. Except for the staff of the MARA Corp subsidiary, current economic condition does not make it timely to resign to pursue other prospects.

The fact that Rais stressed and acknowledged MDEC restructuring and new strategies are not accepted only leads to the suspicion the moves are not direction industry insider see as appropriate or even a flawed direction taken by a non-industry chairman.

Muhyiddin has keen personal interest in the digital transformation of Malaysia since his days as Deputy Prime Minister to Najib. His son-in-law is deeply involved in various digital security ventures including the RM1.2 billion NIIS contact. Rais could be pandering to the boss.

More so,  Rocky Bru would not be crying fire had there been no smoke and flame seen. One insider message received reads:

Ppl leaving MDEC but my info is not 16 ppl. Rais is pushing his own agenda there. CEO has cancer & Rais controlling her as he supposedly saved her from being sacked by the Minister.

Another source with ears on the corporate grapevine claimed even the old timers and veterans in the organisation cannot stand the political interference by Rais. 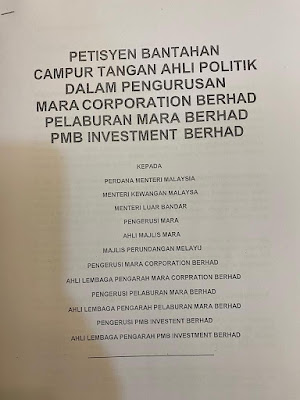 The motivations behind the suspected political interference in MARA Corp could involve self interest in the businesses of MARA Corp, or interest in utilising its cash holding, or loan or handout from a government program strangely done via one of its subsidiary.

The suspension of Badlisyah may or may not have its basis for him hiring his team leaders and key personnel in accordance to his term of reference but without clearance from MARA Corp BOD and MARA Council.

However, the timing of the suspension was a matter of days before he was due to submit reports from an audit undertaken on the subsidiaries and subsequently present his strategic recommendation, claimed an insider from one of the subdiary.

Badlisyah had gone down to the ground to hear directly from the staff of the operational issues. According to the same insider, the performance profile of the company indicate a big hole in the company was being covered up.

The person suspect Badlisyah found the problem and was about to put it on record in his report to the Board and MARA Council.

Dr Latif had expressed intention to strengthen the management team, but at the same time, said he will not interfere in the process of government.

If the intention to strengthen the team is to clean up the organisation by removing Badlisyah, it is equally relevant and more significant that he removed these disruptive characters who could be politically and personally linked to him.

However, will he do so in view of the main characters are PPBM politicians, aspiring PPBM Senator, and even funder of PPBM operation, if not willing participants in any politically motivated plans for PPBM political funding?

Just look at cv of bod members. Hancur. This new chairman know nothing about science and technology. Thank god i never work with gomen or glc just as my great,grand and father did after graduating in Engineering in us in 70s. I am telling new generations to GO WEST young men and women.How can scientists and engineers under these pen pushers and bean counter. Just look at Intel,Amazon,Microsoft et al.