Wrong answer and Tajuddin Rahman could be another Zeti 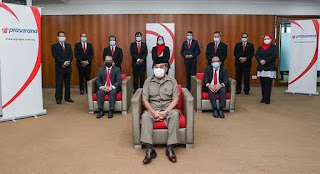 Most politicians appreciate the transparency, no holds bared revelation, and whistling blowing by social media, blogs and online sites. Dato Azeez Raheem once complimented them as Jabatan Netizen.
Jabatan Netizan could be anybody from any walks of life, but the deadliest whistleblowing are those comments giving leads to happenings outside the radar or censored by mainstream media or portal with an agenda.
It attracts more discussions, opening more leads and invite investigation by the more resourceful one.
However, some dinosaur politician, who refused to change their ways, seemed to not appreciate wrongdoing will get leaked into social media and find its way into mainstream media or major portals.
Most recent was SD of Tan Sri Zeti Akhtar Aziz's family members admitted receiving 1MDB money from Jho Low.
Chairman of Prasarana Malaysia, Dato Tajuddin Abdul Rahman have a FB account, but he does not sufficiently appreciate the nature of social media as a fifth column.
He is under the spotlight, but not for his remark related to UMNO pulling out support for PPBM.  Edge Online revealed Prasarana awarded contract to his family member company.
Just like Zeti, who took awhile to response, Prasarana will be giving a press conference at their Bangsar corporate office at 4 PM today.
Substantiated explanation required 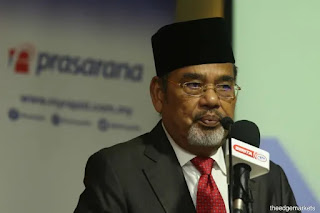 Tajuddin need to answer quite a few questions. His answers should be well explained and substantiate his position. Be truthful or like Zeti, documents would immediately surface to reveal any of his inconsistencies.
It is already expected that he is going to shit on MRCB by accusing them of overpaying contractors by RM700m.
And, he is going to accuse CEO Muhammad Nizam Alias of colluding with MRCB-George Kent and explain this as reason for Nizam's suspension.
However, these are diversionary tactics that could to distract from the allegations Tajuddin interfered in the award of contracts and management of Prasarana even though he is merely a non-executive chairman.
Like the Zeti's family SD, the fact being established and documents will likely emerge on social media or some portals to support allegation Tajuddin used his influence to award contracts to his daughter's company Detik Utuh and his proxy Prestag.
There is a high possibility, more so politically motivated by Tajuddin being a prick to the Muhyiddin government, the situation could be exploited politically.
He should have known better that Muhyiddin's communication team is infamous for doing illegal recording on anyone meeting the boss at his office.
Tajuddin is a predictable creature and his moves anticipated. Nizam may have anticipated himself to be a victim and turned MACC whistleblower. There are reasons to believe the existence of voice recording of a Board meeting, where he instructed suspended and recently appointed CEO Nizam to act illegally.
Prior to the official appointment of Tajuddin in May, there were already noises of his eventual appointment before the brouhaha over UMNO being upset with cabinet appointments that left out key leaders.
A comment in a Facebook posting expressed concern Tajuddin insisted on changing the CEO already appointed by the Minister of Finance, where the authority lies.
Tajuddin's preference was a CEO that has a bad record, corruptible by virtue of being bisa diatur (can do), and boo boo on the project implementation in the past. Don't ask how it came to this blogger's attention.
Similar to MARA Corp 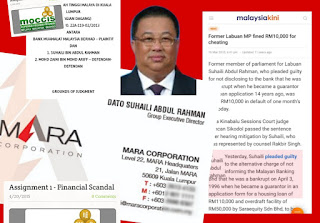 A call to someone in a previous government, who used to handle the Prasarana portfolio, said he was aware of three candidates being considered and all are equally good.
One end up in MARA Corp, but unfortunately situation has screwed up and similar to Prasarana, there exist a plan to oust the CEO.
Source claimed Tajuddin insisted on his preference and now it is revealed he wanted projects for himself. He could get away with cronyism practices in UMNO Pasir Salak Division. Apparently the said daughter is the Division Secretary and prefered by Tajuddin over the Division Youth Chief son (update: now Deputy Division Chief and possible candidate for Pasir Salak parliament).
Similarly, suspicious happening and conflict of interest at MARA Corp too are of possible insidious plans by self serving advisers, members of the Boards.
One cannot get away with such nonsence in GLCs. NST published Dr Kamal Salih's article to this effect of public cannot tolerate "the politicisation of GLICs and GLCs". Though MARA Corp is being mentioned, it applies to Prasarana too!
Not taking it laying down 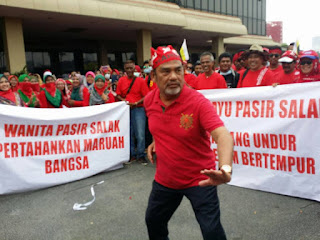 Knowing Tajuddin, he will not take this lying down and agree to the PR way to stay mum. As a politician and fighter, he will want to clear his name.
It is political opportunity to rid of a political detractor, but PMO may have tried in vain to stop Tajuddin from proceeding with the press conference.
It will reflect badly on PM, whose government are saddled with similar occurrences abundantly happening in others GLICs and GLCs, including among others are the NIIS contract, impending explosive issue of Sabah maintainance contract, and sales of Silterra.
Tajuddin will not likely listen and Ministry of Finance as owner of Prasarana would be unsuccessful to stop him.
Tajuddin would insist on a press conference to politicise his way out and force Ainon and Nardin to yet again intervene in the process of law.  He could highlight issues on Zeti, direct negotiations, and other impropriaties of current government.
Something PMO trying hard to squash.
Update: Tajuddin Rahman replied
at 1/04/2021 10:44:00 AM

Prasarana Malaysia Bhd has been subject of bad press since Pasir Salak MP Tajuddin Rahman took over the helm as chairman on May 11 last year, especially over claims that the Umno warlord has been overstepping his boundaries by getting involved in executive decisions.

This is no mere storm in the teacup as the latest flashpoints call to question the political interference in the national transport operator, which in turn casts doubt over its fiduciary duty to the Malaysian public.

The contractors claimed that Prasarana had not paid them since July and the accrued amount Prasarana confirmed but still withheld up to October was more than RM700 million. This amount is expected to balloon to RM1 billion as of December 31 last year, taking into account work done up to that point.

The livelihood of 10,000 workers as well as financial commitments to subcontractors, suppliers and stakeholders as well as banks are at risk, said the companies, adding that they had to rely on internally generated funds to ensure targets set by Prasarana are met.

Coupled with the Covid-19 crisis, the contractors, including their Bumiputera peers, said they were facing tight cash flow and might not be able to complete the project on time. LRT 3 is 43.24% done and is expected to be completed in 2024.

Tajuddin has also been accused of involving himself in two major decisions: the suspension of its president and the possible termination of a development project.

The suspension of Prasarana president and group chief executive Muhammad Nizam Alias is believed to be because he showed signs of insubordination when the board and Tajuddin instructed him to investigate MRCB George Kent over LRT 3. Nizam is also said to have a tense relationship with Tajudin especially over the awarding of contracts.

Further, Tajuddin has sought to terminate the contractors involved in transport-oriented development Latitud8, situated on the site of the Dang Wangi LRT station, and is pushing for Prasarana to play a more prominent role in the project and eventually move its headquarters there.

The public transport operator is expected to pay as much as RM80 million in compensation to terminate the joint land development agreement. According to business publication The Edge, citing documents, Prasarana’s owner, the Finance Ministry, had given tacit approval for the company to move there.

Detik Utuh is a Tajuddin family company. Tajuddin himself was a director until October 2013 while his daughter, Sri Rahayu Tajuddin, remains a board member.

Intan Sekitar won the bid to develop Latitud8 at end-March 2012. Prasarana, the owner of the land, was expected to receive RM46.64 million or 21.2% of the project’s estimated RM220 million gross development value.

Since Tajudin was only appointed Prasarana chairman in May this year, he and his family were involved in the project even before holding the position.

But various media reports show that the project’s deadlines had been consistently shifting. The development was set for launch by end-2016. That never happened, instead construction was brought to a halt with the relaunch date some time last year. Now it’s set to take place in two years’ time with the delay being attributed to tough market conditions.

At the time of writing, it is not known whether Crest Builder and Detik Utuh have been informed of the possible termination of Latitud8.

But, the group has been bleeding red since 2014. According to its latest financial results ended December 31, 2019, Prasarana registered a loss of RM3.61 billion on the back of RM842.09 million in revenue. Its total liabilities for the year stood at RM35 billion compared to total assets of RM1.29 billion.

External auditor Ernst & Young PLT, in Prasarana’s 2019 annual report, said as liabilities exceeded assets, “these conditions indicate the existence of material uncertainties that may cast significant doubt on the group’s and the company’s ability to continue as a going concern and, therefore, the group and the company may be unable to realise their assets and discharge their liabilities in the normal course of business”.