Raising the black and white flags 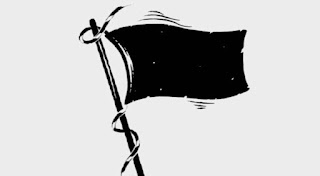 Its irrelevent whether this campaign is initiated by PKR or whoever, Tan Sri Mahiaddin has to go.
Makes no different who the replacement is, the first order of business is to change him before situation get from worse to worst.
Be it Hishamuddin or Anwar Ibrahim or Zahid Hamidi or Shafie Apdal or remote possibilities of Najib or Tengku Razaleigh, the choice of replacement should not be allowed to divert attention from the more important task.
There are numerous viable options available so those delving into it is using it as excuse to support the incompetent leadership, devious politics, and forever giving excuses behaviour of Mahiaddin.
Distress signal 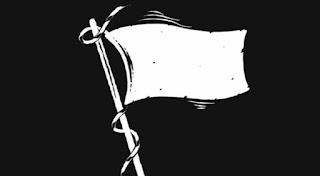 And, this blog is also raising the white flag to signify the country is in need of dire help.
It is supporting the campaign initiated by Amanah because it is a practical distress signal to neighbours and community for family that ran out of resources to feed themselves.
For cases reported, it proves to be effective in attracting immediate assistance from neighbours, NGOs and not withstanding, political parties.
The resistance to this effort only came from the politically defensive and growing arrogant PAS leaders, and mindless PPBM members and supporters.
It would have been smarter politics to support the initiative and diffuse the political victory of Amanah. The call would surely gain support from public.
Unfortunately, hair splitting clergy such the Wahabi Federal Territory Mufti lost the plot to issue an edith to call it as haram.
Such edith is unnecessary and not a convincing call based on broad practical understanding and sound assessment.
Failed government 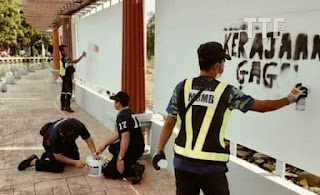 Malaysia underwent the world's longest Covid 19 emergency, non stop MCOs and its derivatives, vaccinations, and regulated SOPs issued nonstop and continuosly flip flop.
This coalition government of UMNO politicians and political parties led by Mahiaddin have proven to be indecisive.
It lacked the foresight to anticipate, preempt, and dealt with problems in crisis situation. The leadership was more concerned and focused in taking political opportunity from the pandemic.
It is a #KerajaanGagal in all sense and perspective.
at 7/03/2021 11:21:00 AM

It is not a distress signal but more of frustration on PH and Umno Court Cluster unable to dislodge Mahyuddin and PN government from Putrajaya. Keep on dreaming, it is free of charge. We the Rakyat are very nappy with all the efforts and caring done by Mahyuddin and his Team. You and all PH + Umno Losers are all talk.