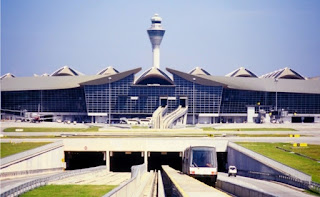 Hope the title hit the right note for the golfing members of the Board of Directors of MAHB.
Tengku Zafrul's denial is not convincing. On his second or third shot, he may succumb to sell or give long term lease of the Subang Airport land to Desmond Lim's WCT.
MAHB could see the green from where it is now but obstacles ahead are denying a clear path.  Need to get the ball on the fairway first.
Safeguard its cash position and prioritise to get the Subang Regeneration Plan off. No point spending money on critical upgrade for KLIA but lose Subang.
If WCT plan go through and the point-to-point airport becomes a reality, it means tens of billion ringgit of potential loss in revenue and the billion capex spending could be utilised for other strategic purpose.
Not to mentioned, the cannibalisation is not limited to MAHB, but MAS and other airlines too. There are pea brains up there cannot see beyond and gullible to simplistic commercial narratives.
No doubt MAHB is commited and tender have been out since 2019, but Covid 19 and economic situation of the country under PN government has gotten out of hands.
The country is in dire straits, aimless and without any plan. The leaders are incompetent, corruptible and self serving. Crisis demand for strong leadership, but the national leaders have no sense of priority and purpose.
Overnight, social media downgraded Malaysia from #KerajaanGagal to #KerajaanCirit.
Today, US State Department downgraded Malaysia to its lowest tier in human trafficking. This has serious and deep economic implication, but has Wisma Putera done anything?
It is risky to commit sizeable money for capex to an uncertain future. The SOP for international travel and acceptable vaccine to WHO is still work in progress.
England versus Germany game looks as though life is back to normal in the UK, but new C-19 variants could render any vaccination effort as useless.
International travel will not be any where close  to pre-pandemic level for next two to three years. The prospective traffic volume for KLIA may not offer viable IRR for the capex plan.
Surely, this is not a reaction to TheVibe.com's ''Pricey’ Pestech to snag MAHB’s aerotrain tender?"
In the last article on Aerotrain here, it need be clarified that the budget for Aerotrain did not jump from RM400 million to RM800 million. The Edge did not highlight that the difference is for different maintainance package.
Nevertheless, Chairman Dato Dr Zambery Kadeer already indicated concern for MAHB cashflow to inform media of revised capex budget back in November 2020.
Though Pestech does not feature well in this blogger's market intel and assessment of the company, this blog is not about to attempt a birdie against Bombardier.
(Note: This breaking news on Pestech surfaced on Facebook here at around 4AM 2/7)
There should not be any urgency on the BOD to decide on the aerotrain or baggage handling or other amenities now. Hold off a little while till there is a straight path for the putt.
Frankly, it is a better bet to bank on Subang Regeneration Plan than investing on "beautifying" airport operations.
It better serve the national agenda for a multiple effect of creating jobs, business spillover, and boast the economy.
at 7/01/2021 10:43:00 PM