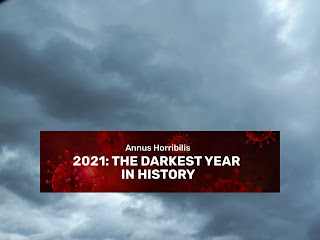 Last year 2020 was the year the vision expected Malaysia to be a "developed nation". To say it did not turned out according to expectation, it is an understatement. The Covid 19 pandemic began that year.
The year 2021 came with the hope life could return to normal. The new normal was still considered  abnormal. Unfortunately, it did not turned out to be any better.
Currently a dark sky is hovering over Kuala Lumpur. The annual flood festival in the East Coast states of Peninsular Malaysia began. Even former Johor Baru MP, Tan Sri Shahrir is worried of river water level in Johor Baru. Selangor and Kuala Lumpur is not out of the wood yet, hydrology-wise.
Its certainly made 2021 another and perhaps, worse annus horribilis than 2020. The hits may keep on coming. 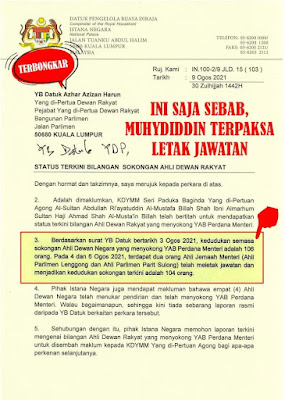 This is despite Tan Sri Muhyiddin vacated the premiership just more than 100 days ago, and prior to that, imprisonment of citizens at their homes ended.
The country is still struggling, in reverse order of priority, socially, economically and politically. 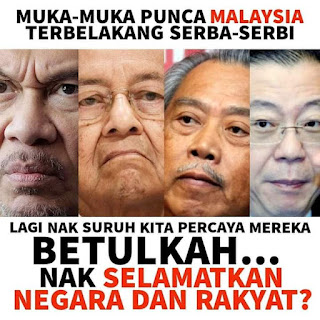 Despite the lockdown, emergency, outright forced vaccination and endless SOPs, Covid -19 infection has not lowered in numbers to three digits yet, and new variant Omicron and booster is the vogue.
The economic toll was too much to continue the lockdown. No indication Muhyiddin's recovery plan taken into effect before his departure is the impetus needed for economic recovery.
Neither was it the solution to emerging social problem as a result of the impact of the foolish politically motivated emergency.
The emergency backfired on Muhyiddin and it was unsustainable for him. 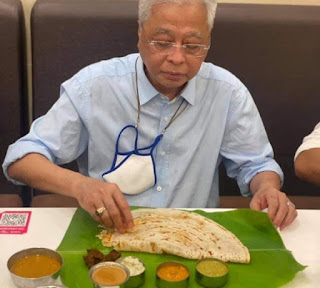 His replacement from UMNO, Dato Seri Ismail Sabri was to steer the coalition government, which Dato Seri Shahidan insisted is PN government.
The #kerajaangagal hashtag remained relevant. Ismail is still grappling and struggling to get the ship togather to sail smoothly. He inherited a country from PH and PN with a bleak outlook in all aspects.
Young professionals are seeking employment abroad. Unemployment on the rise. Unemployed graduate is as high as 500,000 and school leavers significantly more.
Ironically, there is a major shortage for the 3D jobs and affecting the economy, particularly agriculture and retailing. Recently 30,000 work permits for foreign workers had no takers. Foreigners not coming to work.
FDI, which drove the economy in the past, dried up and moving to Indonesia, Thailand and Vietnam with the economic plan and manpower supply. 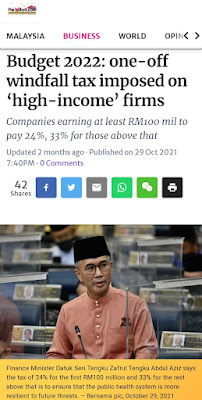 Malaysians could leave due to Tengku Zafrol's windfall tax. It was a condition imposed by Lim Guan Eng and Tony Pua for DAP to agree to a political truce agreement between PH and "PN".
The neighbours are booming. However, Malaysia is clueless and without a serious forward looking plan.
Indications from rising food prices or possibly shortage points to the possibility Malaysia will have problem feeding its people.
Over the decadess, government foresaken agriculture and food production to cultivate golf courses and relied on imports to keep prices low. Importers benefit while local farmers impoverished. They failed to realise farms are closing up due to unsustainable cost and labour shortage.
Education has gone topsy turvy as usually scheduled examination got extended till March next year. The quality of education suffered from online classroom PDPR. A generation emerging without social experience of school life and discipline of school and university.
More social problems will ensue. And suddenly comes the great flood.
The terrible 2021 is not uniquely Malaysia. An Indian website www.news9live.com described it as the darkest year in history: 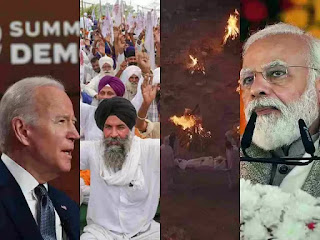 Annus horribilis 2021: Learnings and musings from the darkest year in history
Editor's Note: Even Dickens would have agreed circa 2021 was the worst of times, perhaps in the entire documented history of humankind. The world had seen the horrors of great wars, famines, plagues and other catastrophes in the past, but nothing compares with the magnitude and spread of the fear, desperation and death wreaked by a horrifying pandemic that affected almost every single person on this planet.

Humans remember tragedies much more than anything else. So, you may ask, why are we revisiting a year that won the title of 'annus horribilis' against all the preceding years in history by a Mike Tyson-esque knockout? Why invoke memories that should be forgotten?

There are many answers. The simplest of them is every tragedy leaves behind lessons that should not be forgotten, lest we repeat them, especially when the shadow of that calamity not just lingers but also threatens to become darker and longer, like it does with the arrival of Omicron. The complex answer is that revisiting a catastrophe we survived gives us hope in our own destiny, fortitude and ability to overcome a monster like the year 2021.

With these two objectives in mind, our writers and guest columnists have their compiled musings and learnings from the year we are eager to bid goodbye and good riddance.

The God of Death, as one of our writers calls the pandemic, was the main show this year — literally a tragedy in three acts and counting. But a lot happened on the sidelines: an end-of-days type election in Bengal, a rare show of defiance by farmers, a desperate global meet on the environment and some heroic achievements on the sports field.

On the last day of the year, we are revisiting some of them. Happy reading (?) and, hopefully, a happy new year.

The compilation from the Indian experience can be read on here.
It is not likely to differ violently than what Malaysians had to undergo this year. Media began to write since last week. More today and tomorrow.
The celebration to usher in the new year will be more sombre and spiritual with PM holding a special Islamic hajatprayers and zikir recitations to the chagrin of Teresa Kok who questioned Ismail for not joining the Christmas celebration. 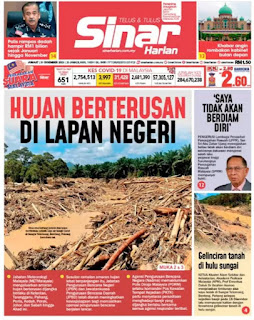 That's nit picking politics. The 15th general election could be coming. She should know better that there is a massive flood affecting eight states in the Peninsular.
DAP is on a racial and religious instigation mode. It will not work this time. They are on a slippery slide. PH is in a shamble. 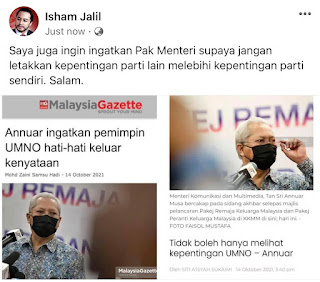 But so do "PN government". Despite certain faction in UMNO trying to keep the PN ship together, it is an uphill task to convince grassroot to accept PPBM on a permanent basis.
The discomforting tripartite arrangement has PPBM insistent that UMNO not in their accustomed leading and dominant role.
Only a major catastrophe could shove the idea into UMNO members' throat and make them sway. There are sceptics suspecting the poor handling of the flood may have its own political twist. 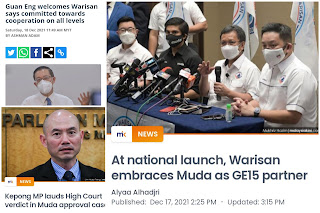 New coalition will likely be formed from mosquito political parties aspiring to create widespread disease. It does not serve to get the national politics settled. PN has to be terminated and country governed by either BN or PH.
Despite its own shortcomings, the experiment of 2018 proves the former to be far more capable and experience in administration. BN should be the preferred choice to end this nightmare and stabilise the country.
The life and livelihood of the masses have been foresaken. The political slogans endlessly stressing on rakyat, including Keluarga Malaysia, but who really have them in mind.
The only solution left for flood and pandemic victims is EPF withdrawal, but either political ego or massive investment loss is holding it back.
Maybe it is intended for financing self serving big business. This is especially so with impending Bank moratorium problem in the making.
On such discouraging note, there is only hope for a better year coming. Do try to be happy for new year 2022.
at 12/31/2021 03:06:00 PM