The next big thing 1MDB-related scandal, but where is Mahathir? 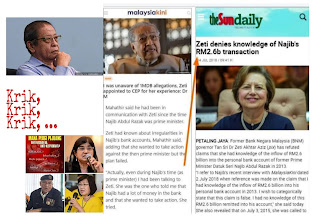 There has not been a whisper from the likes of DAP's Lim Kit Siang, Opposition Leader Datuk Seri Anwar Ibrahim or former Bersih chief Datuk S. Ambiga.

Most of all, where is Tun Dr Mahathir Mohamad? He is the man who explained the 1MDB issue to the layman in one word – kleptocrats.

Joceline Tan
FMT's report dated November 23rd entitled "'Anti-kleptocrats' silence on Zeti's husband 1MDB funds, says Shabery" accurately described the response from the parties raising ruckus against Dato Seri Najib some 6 years ago.
Though not sufficient to respond to the rapid fire of expose and rebutting questions raised to dominate public perception, the then BN government side made an effort to explain.
The rest is history.
The impression from insiders this blogger had access then was that the government side did not sufficiently know what had actually happen.
Thereon, it was concluded there has to be more to the story than the news dominated by Sarawak Report, Edge, and foreign media, and also added with spins and slanders by then opposition. 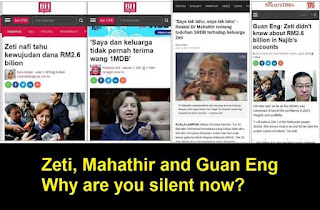 This time around the proponents against Najib on 1MDB are completely dumbfounded, silence, and unable to response to the expose on Zeti and her family.
The only words from Mahathir is the oftenly repeated response "Saya tak tahu" (I do not know) when his back is against the wall. 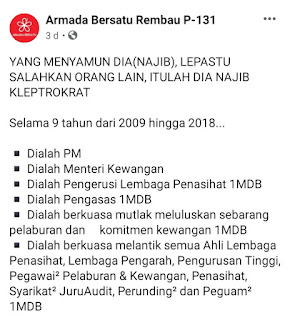 On social media, Armada Bersatu FB could only churn out a weak and desperate narrative of Najib blaming others for his crime. It was originally posted by Chegu Bard, but he has taken it down and claimed to have been consistently critical of the SRC judgement.
Almost similar narrative, but with a little twist, is "why didn't you?" counter attack by a lone UMNO wolf against Najib. 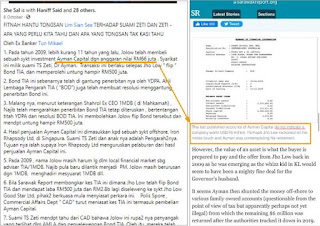 Mahathir diehard attempted to spin stories including claming the RM65 million returned from Tawfiq Ayman's company came from sales of Ayman Capital. It was swiftly rebutted as inconsistent by Lim Sian See using information from the anti-1MDB's bible, Sarawak Report.
The long and short is that the antagonist need to be current in their arguments. Pointless to deviate from case facts already in the court.
More so, Tan Sri Shafee Abdullah's press conference has set the tone and Court of Appeal has agreed to meet on Tuesday December 7th to hear the newly emerge evidence.
It is sufficient enough for Joceline Tan's column in Star Online Saturday has Zeti and Bank Negara Malaysia's integrity in the spotlight. 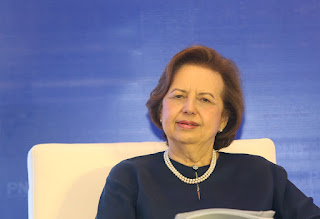 The mysterious case of Zeti and her husband
By JOCELINE TAN
ANALYSIS
Star Online
Saturday, 04 Dec 2021 1:13 PM MYT
TAN Sri Dr Zeti Akhtar Aziz has always come across as poised and intelligent, with not a hair out of place even as she shattered the proverbial glass ceiling as the first woman to helm Bank Negara.
But the flawless image is in danger of shattering because of the firestorm of controversy building up around Zeti, her husband and their sons.
The noise over her family's alleged involvement in the 1MDB scandal has grown louder after the Malaysian Anti-Corruption Commission (MACC) confirmed that RM65mil of 1MDB-linked money had been recovered from a Singapore company owned by the "husband of a former Bank Negara governor".
No names were mentioned but everyone knew who he was. 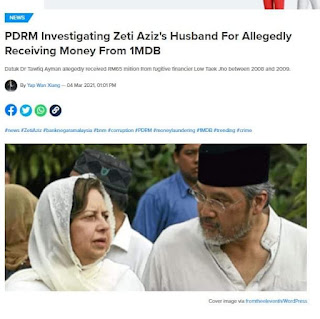 The announcements set off a chain effect of sorts, with people urging a full investigation on Zeti.

There has also been criticism why the probe was taking so long after the Minister in the Prime Minister's Department in charge of law, Datuk Seri Dr Wan Junaidi Tuanku Jaafar, informed Parliament that the police knew about it in 2019 and were still investigating.

Then there was Tan Sri Tommy Thomas' jaw-dropping comment that the Zeti issue was "public knowledge".
Thomas, who was attorney general from 2018 to 2020, said he did not act on it because the investigation was still in progress at the time.
The allegations implicate Malaysia's main regulatory institution, and if true, could be the next big 1MDB-related scandal after the one that brought down Datuk Seri Najib Razak. 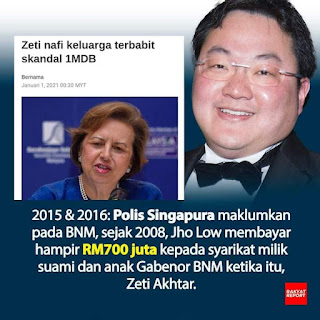 Singaporean authorities had alerted Bank Negara as early as 2015 – and again in 2016 – about suspicious transactions from accounts linked to fugitive businessman Jho Low into a company owned by Zeti's husband and one of their sons.
About a year after that, Zeti retired from Bank Negara. Corruption and politicians have become somewhat like love and marriage, but it is something else altogether when the case implicates the head of a central bank.
It also compromises the credibility of the regulatory body.
There have also been calls for a Royal Commission of Inquiry so that action can be taken to put the financial institution back on a proper footing. 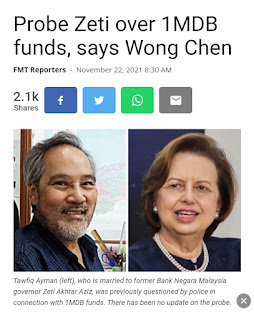 Subang MP Wong Chen hit the nail on the head when he said that if Zeti had done her job without fear or favour, the 1MDB scandal could have been better contained.
Wong said the revelation that Zeti's husband had received RM65mil of 1MDB money raises the question whether the failure to act on these reports was "caused by political pressure or by conflict of interest".
"Stern action must be taken so that in future, senior civil servants will be deterred from colluding and closing an eye to scandals perpetrated by people in power," said the PKR politician.
Wong's voice stood out because of the deafening silence on the part of the usual advocates of truth and justice.
There has not been a whisper from the likes of DAP's Lim Kit Siang, Opposition Leader Datuk Seri Anwar Ibrahim or former Bersih chief Datuk S. Ambiga.
Most of all, where is Tun Dr Mahathir Mohamad? He is the man who explained the 1MDB issue to the layman in one word – kleptocrats. 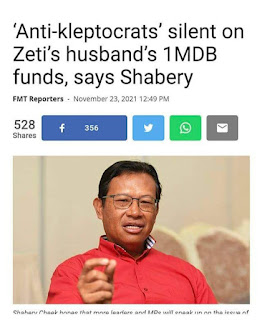 And it worked beautifully. Former minister Datuk Seri Ahmad Shabery Cheek has called it the "silence of the anti-kleptocrats".
Dr Mahathir briefly touched on it in an interview with a news portal but what he said could possibly be summed up in a few words: "I didn't know."

What else could he say? The former prime minister is terribly compromised. He had, after all, appointed her to the Council of Eminent Persons and made her chairman of the prestigious Perbadanan Nasional Bhd.
Pakatan Harapan leaders should speak up and defend Zeti if they believe she is in the clear.
They should also take a stand if they think that corrective measures are needed. It would help them regain the moral high ground. 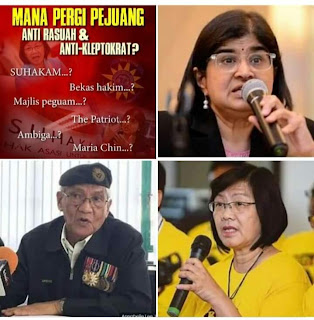 Selective silence will only drive more right-thinking Malaysians to lose faith in political change.
It gives the impression that politicians are all the same, righteous about corruption and misconduct only when it involves their opponent. But if the wrongdoer is on their side, then politicians are like the three monkeys who see, hear and speak no evil.
At the start of this year, Zeti issued a statement defending her family against all the allegations.
She censured the "untrue media reports" that linked her and her family to 1MDB funds and said she had given investigating authorities her full cooperation and necessary information.
Her denial has, however, failed to stanch the calls for answers and the story is still unfolding. For instance, the recent revelations by MACC and the police have led Najib to apply for the Court of Appeal to hear new evidence relating to Zeti's role in the 1MDB debacle.
"I think her legal troubles are limited but the allegations, whether true or not, put her reputation in a terrible light. It can't be easy for her and it's sad that it has come to this after what was otherwise an illustrious career," said a Kuala Lumpur-based lawyer.
Zeti has an impeccable pedigree and she was a trailblazer of her generation. The authorities should step up their probe and decide whether there is a case to pursue.
The delay is not fair to everyone, be it Zeti or her family, the institution she once represented or even to Najib's quest for a fair trial.

---------
The tone of the illustrous lawyer quoted by Joceline Tan is a familiar voice.
She could be talking to a Tommy Thomas or Ambiga which typically would plead for sympathy or be rhetorical whenever trapped in a public forum without a justified and convincing argument to present. 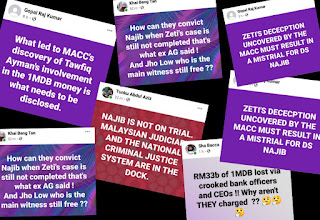 Whichever the outcome of the Court of Appeal, there are sufficient doubts. There is more to the 1MDB story than what was then visible to the eyes and audible to the ears.

Not customary for this blogger to defend an accused in an alleged corruption case, but for this exception, it was a right call against the majority of Malaysians.