Is Tengku Zafrul days as Minister of Finance numbered? 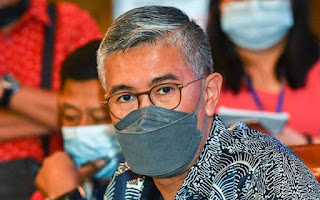 The belief amongst political pundits is Dato Seri Tengku Zafrul was appointed by Tan Sri Muhyiddin, thus remained aligned to him despite being reappointed by Dato Seri Ismail Sabri as Minister of Finance.

Though an UMNO branch member and associated with the 'ole Tingkat 4 group, he is seen as pro-PPBM. The talk on the political grapevine is that his attempt to get a place in Kuala Lumpur to run under UMNO ticket for the GE15 has come to a nought.

Zafrul could run in Lembah Pantai where his uncle was formerly the UMNO Division Chief and his brother the current Deputy Division Head. However, it is no easy ride against current MP Fahmi Fadzil.

His name turned up at his mother home town of Kuala Pilah. The current MP Eddin Shazlee is from PPBM and the one that slept through the entire graduation ceremony of a University he presided over.  PPBM may consent for Zafrul's candidacy.

Talking of Tingkat 4, Khairy Jamaluddin is an UMNO Minister but taken an opposing position against President Zahid Hamidi. He is not only with the faction friendly to PN and indirectly PPBM, but was recently seen at Publika to bring 7 UMNO Head of Divisions to see Muhyiddin and Hamzah Zainuddin.

It is puzzling to see MalaysiaNow picking on the exposure by SteadyKu Hussein in his new website here (blocked by authority again) against Zafrul and Securities Commission (SC).

Though MalaysiaNow angled the article here towards SC, mentioning the names Gooi Hoe Soon, and Sharifa Munira would find its way to Zafrul.

To the cynical, it is seen as a threat to SC to "settle" Azam Baki's case fairly. However, political analyst see it as PPBM aligned portal helping to attack Zafrul. It is because there have been several viralled messages on Whass App groups making outright accusation towards him and names mentioned.

MalaysiaNow been reporting Azam's side of the story and today's published article by UK-based Malay criminologist, "Did PSC exceeds its power in calling Azam?" was certainly clear which side the pro-Azmin and PPBM and PBM friendly portal is with.

Initially, MalaysiaNow joined the crowd on Azam, in the manner to quote from R Rajaratnam here, to chant, "Guilty! Guilty! Guilty!" Their January 6th report was classic MalaysiaNow slander to insinuate guilty as charged by giving the title, "Sharing stock accounts against the law, says securities commission" to report on SC statement to investigate.

At the material time, a reliable source claimed SC have not talked to the broker and even Azam himself. He has not broken any law or Bursa rules under Securities Industry Act (CDS) 1991 and the variations is acceptably within the exceptions and exemptions of the law.

MalaysiaNow is only seen as more committed to also give Azam's side of the story after Muhyiddin came under fire for washing his hands from taking responsibility to appoint Azam as MACC Chief Commissioner and Azam begin his procedure to file a lawsuit against Lalitha. It could be a cover or change of mind.

Observers suspected MalaysiaNow's report on PKR and against Tan Sri Abu Zahar Ujang is as if they are still PKR friendly.

The report here hardly mentioned Zafrul by name, but the same story viralled over Whassapp and Telegram Groups with his name being explicitly mentioned. It is MalaysiaNow promoting the authenticity of the accusations made.

During the recent on again issue on EPF withdrawal, a rumour within his Alumni was that Zafrul has offered his resignation. Talking about Alumni, one PPBM member close to Muhyiddin had recently openly cast aspersion against him. 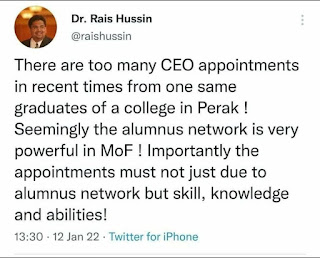 Respect where it is due, MCKK do produce scholastically brilliant Malay students, and has the strong  tradition in educating the creme de la creme Malays into leaders in politics, civil service and corporates. For the past few decades, other schools have emerged to produce better academic results than MCKK. Merit should be consideration over cronyism.

He scrutinised proposals and drew up policies like the risk assessment of a credit officer or investment banker. He forgot to do more than scrutinising and micromanaging plans and proposals in order to revive the economy ruined by Muhyiddin's disasterous emergency for political survival.

Two weeks ago, Zafrul talked about consolidation of public finances in the manner of neoliberal and their set of policy templates. He failed to understand the implication of such policy will doom further the gloomed state of the economy.

His fiscal management is seriously doubted. Zafrul hyped up the revenue projection for 2021 budget in his 2020 budget presentation and ended up seriously short. For 2022, his budget claimed to be the biggest but the allocations announced are manipulating the untrue. An estimate is talking in the tune of RM50 billion and RM100 billion, respectively.

He announced windfall tax and stamp duties on shares, but the moment stock market crash in capitalisation by few hundred billions, he flipped and flopped.

Despite having a former DG of EPU as mother, Zafrul seemed to have no clue on the impact of his policies. Let alone putting together policies that could trigger impactful economic and financial outcome, and revive confidence.

For instance, the narrative to support his refusal to budge to another EPF withdrawal for flood victims has no depth and explanations were repetitive common cliche. An indication the banker lacked the empathy to understand and appreciate the problems of the common folks.

His communique, and creativity in problem solving is more one track minded Bank CEO than a Minister of Finance.

A South American government refused the same public demand for pension fund early withdrawal. It caused the ruling party to lose its next general election. Increasingly, Zafrul's not yet apparent incompetency as Minister of Finance may prove to be a liability to the delicate PN-BN government.

A Little Bird claimed several names from the private sector have been mentioned to replace him at the end of his senatorship. They are being  "interviewed" by the same so-called headhunter who brought him in. So it may not be about attacking SC on behalf of Azam Baki.

If you friend with Singapore then you don't need enemy.. Lupakan Singapura tinggalkan Singapura. Good bye Singapura fuck off Singapura