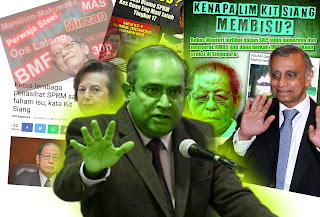 MACC Chief Commissioner Azam Baki and the MACC panel has come out to explain the 2mil shares ownership in year 2016 issue.

Whether you believe their explanation or not is up to you. I am not defending Azam.

However, what EVERYONE did not address is: How much was that ownership worth. 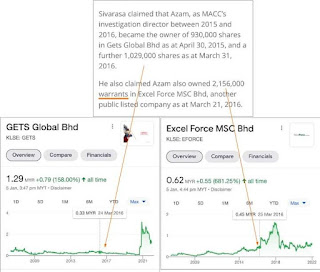 So in total the the total worth was approximately between RM530k to RM730k.

But what really irks me is why former MACC advisory panel member Edmund Terence Gomez, Unker Lim Kit Siang, entire PH and all their affiliated NGOs want the whole Malaysia to focus on this RM530k to RM730k share ownership in year 2016 which was never hidden information since it was stated clearly in the annual reports of the respective companies... 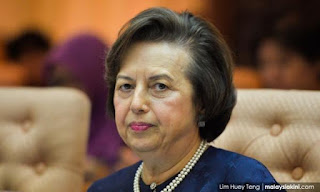 ... but never uttered a single word about former BNM Governor Zeti' family receiving up RM700mil from Jho Low and returning RM65mil and former Economics Minister Nor Yakcop receiving RM85mil in 1MDB related funds which both hid away in Singapore accounts.

Both cases of which does not seem to have been explained by the MACC and AGC in any way even though the their investigation papers in year 2019 was exposed recently.

Do these bunch of hypocrites believe that RM530k-RM730k is a bigger issue than RM65mil, RM85mil and RM700mil - especially since there was no direct corruption allegations against Azam but the latter two are clear corruption elements since it involves Jho Low and 1MDB money.

Or that the MACC commissioner position is more important than BNM governor and Economics minister? 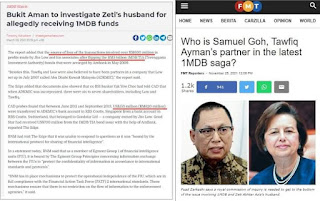 1. Involved in siphoning RM600mil money from the 1st bond offering of 1MDB in year 2009. Bond offerings in Ringgit requires BNM approval too.

2. Involved as a shareholder in ADKMIC. CAD probes found that between June 2011 and September 2013, US$153 million (RM620 million) were transferred to ADKMIC’s bank account in RBS Coutts, Singapore from a bank account in RBS Coutts, Switzerland, that belonged to Goodstar Ltd — a company owned by Jho Low. Good Star had received US$700 million from the 1MDB/TIA bond issue with the help of AmBank, reported The Edge.

"Mr Goh, 41, also testified that he received more than US$2.25 million from another deal involving Aabar Investments PJS, the main shareholder of Falcon Bank, the second bank shut down by Singapore regulators.

Husband is business partner with the person who set-up the fake accounts which required wife to approve the multi-billion Ringgit forex transfers to.

4. Zeti involved as a main prosecutor witness in both the SRC and 1MDB trials as she was the one who asked Najib to set-up account in his own name and was asked by Najib to monitor his accounts for suspicious transactions.

But somehow Lim Kit Siang, Lim Guan Eng, Mahathir, BERSIH, C4, the AGC, MACC and the court judges/prosecutors don't seem to have much interest in this.

In the meanwhile, Tan Sri Robert Phang was reported by The Vibe: Azam Baki should have told his brother to f___-off.

It's obvious that Lim Kit Siang, Gobind Singh, and DAP is building a justified cause for later purpose by creating negative perception against Azam Baki for leading the investigation in the tunnel case.

For Robert Phang, is he vengeful against Azam for a request not entertained for Vertice Berhad? 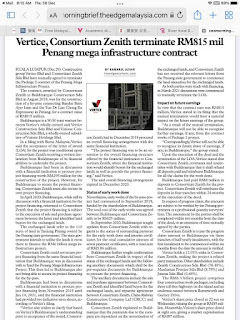 Apparently Vertice was in the news relating to tunnel consortium BUCG Zenith.

In the meanwhile, let it be for those in the know (including Robert and his so-called foundation) for others to find out. 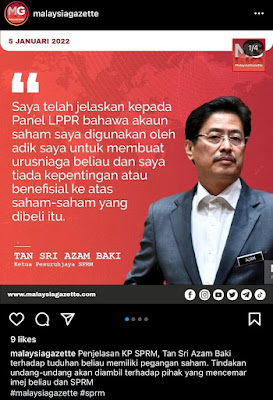 Tan Sri Azam Baki has explained his position that the beneficial owner of the shares is his brother Nasir Baki's.

The social media is having fun to take pot shot on his explanation for the past 24 hours. They need more material or loses steam by Saturday when chicken gain public attention.

Those with some knowledge of the Securities Industry Act 1991 raised issue on the illegality of Azam to allowing himself be proxy.

The beneficial ownership status of his brother has not been questioned. Maybe the answer lies in other law than the archaic SIA. 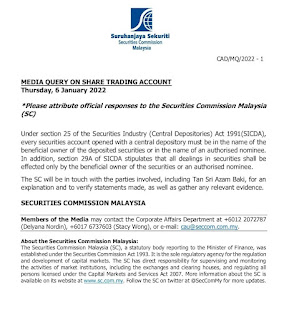 The young cikus in SC would likely scrouge through section by section of the law. The answer may be found in the exceptions and exemptions at the tailend of the right law. 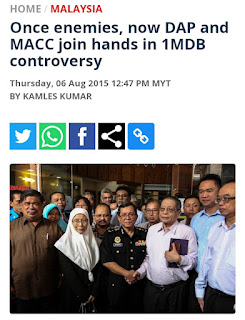 Politicians ...so that DAP can make another political stunt to presume BNM bought overpriced land to fulfill their conspiracy theory.

A lesson to MACC to never trust the extended hands of DAP again.