I'm going back to the border
Where my affairs, my affairs ain't abused
I can't take any more bad water
I've been poisoned from my head down to my shoes

The general Malay rejection and pro-free market Chinese acceptance can predictably be expected from Tun Musa Hitam's press statement to seek for WPI exemption from Malay affirmative action policy. One will expect Tun Dr Mahathir to raise a barn this Thursday; he is due to speak in Johor Baru.

Is PM Dato Seri Abdullah Badawi serious about WPI to set as the precedent towards abolishing NEP? For the sake of FDI? After all, he and Dato Seri Najib gave words of comfort that credible Bumiputera would have their fair share. 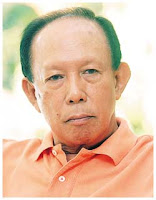 The lead to that question lies in a comment received from an UMNO political veteran. "Musa is all about politics. He doesn't speak other language." True enough, Musa's first line in a March 9th Straits Times interview was, "I was a political activist".

This latest episode confirms the prediction of the late MGG Pillai's Christmas 2002 article that spot-on predicted Musa working behind Abdullah to revenge, disassemble the legacies, and reduce former boss Mahathir into a non-entity in Malaysian history.

Vision 2020 diluted into Islam Hadhari, a grandiose heresy and National Mission 2057, confused mission beyond possible predictability. With Proton due for sale soon, the can-do spirit driving Mahathir's Industrialisation will extinguish. To replace, mega corporate with objective lacking vision, sense of mission, and compassion for society. The Malays is asked to "Balik kampong tanam kacang" by returning to agriculture.

Analyse this and other events, and Musa's background, you'll see Musa written all over. Musa is decades out of touch and these reversals are Malaysia according to Musa.

His hands-on familiarity is only rural development of Tun Abdul Razak's day, administrative function, and political positions in UMNO. Musa's understanding of global economy is only as, to quote from his interview, "a 'copycat' economic climate". He missed and misunderstood the essence of Mahathir's Mini Industrial Revolution. Never touch base with the Information Age.

How will it jive with 60% urban population, according to latest World Bank data? And, a rapidly rising population?

With his accomplice running Mahathir to the ground, Musa is in a last ditch attempt for more space of himself in the history book. With the help of protégé Abdullah, his public visibility has revived. He was made Eminent Person to chart the direction of Asean + 3 in a KL Forum in 2005, despite not knowing the head and tail of it. A job better suited for the originator of the EAEC idea, Mahathir.

Already, "I made it", exclaimed Musa privately to his former boys on the Tunship award. A similar tone of excitement can be found in his words on super mega WPI. For that, he is willing to throw away his lifelong UMNO struggle with the proclamation of "No place for nationalism in the globalised world."

Another episode in Malay annals of betrayal by its leader.

Back Against The Wall

The five birds of problem Abdullah is trying to kill in one stone, before he can comfortably call for an early General Election. Read the excerpt of AP news report today, March 24th, 2007 below:

"Malaysia's ruling coalition faces a tough task trying to keep its large parliamentary majority in the next general election, a news report quoted the country's deputy leader as saying, amid speculation that polls could come within a year." 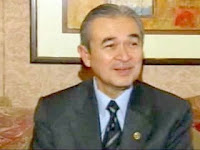 Using the word made famous by Musa, Abdullah is in political "desperado". He won 90% of the Parliamentary seat and recaptured Terengganu in the last 2004 General Election with a 53% popular vote majority. His election manifesto and sloganeering touched the heart of Malaysians.

The tide receded and it's getting more difficult. If the recent Merdeka poll is any indication, some 60% of non-Malay vote is going Opposition. These are the voters that saved UMNO in 1999. Although Malay support looks secured, UMNO was denied the chance to test at the Raub by-election. Words are Anwar Ibrahim orchestrated the boycott.

Abdullah will face a General Election with his nice guy and "Mr Clean" image tattered by Mahathir's expose of his nepotistic and questionable political practices and business dealing. His silly comments, factual ignorance, and off guarded antics at press conference, speeches and public event is common fodder for ridicule. And, he's been caught lying too often.

No press control and manipulation can stop the barrage from alternative media, and the ground talking, both within and without UMNO. Abdullah could not deflect the attack on his weak leadership and administrative ability, imposing son-in-law and his band of anarchist in Abdullah's office. Too much fire to extinguish for his "bomba".

Grumbling amongst Malay professionals, businessmen and middle class will spillover to the rural power hinterland. Abdullah has been undertaking major reforms beyond his own ability to comprehend. Its pro-IMF policy is dismantling the 50 year-old political economy structure of Malaysia and antithesis to UMNO's nationalism with multiracial cooperation ideology.

His austerity drive in the early one two years, badly planned and executed GLC reform, and de-industrialisation program put the economy directionless with low growth, high inflation, massive retrenchment of educated middle class, and graduate unemployment. There is no new sectoral growth area and FDI has plummet.

However, by hook or by crook, Abdullah needs a General Election soon. The theory goes that having delayed UMNO's party election, he needs the General Election to rid his distracters to enable him to stay long enough for Khairy's probable succession to Premiership.

Give a person power and constant praising; even a mediocre will start to have dreams.

The first salvo came from Mahathir as he questions some insidious automotive policies to "kill off" Proton. But, it was the flip-flop cancel-build-cancel of the Johor Bridge that turned into an all-out war on Abdullah and opened the Pandora Box of other issues from Scomi, ECM Libra, Pantai, and lots more.

The Johor Bridge or Scenic Bridge was Mahathir's plan to boost Johor as a serious competitor to Singapore as a logistic centre with multifunctional role. Till today, no justifiable reason was forthcoming. The fear of lawsuit from Singapore cannot be a basis because both disputing parties have to agree for an International Court settlement first. It is crystal that Abdullah succumbed to Singapore pressure to what is within our sovereign right? Some believed he is "bought".

Certainly, having Johorean revolt is something no UMNO President can ignore. Johor is home base and historical origin of UMNO with 500,000 of the 3,200,000 UMNO memberships. It was Johor's Constitution that gave justification to oppose the 1946 Malayan Union. It was Sultan Ibrahim of Johor that supported the formation and movement of UMNO till Malayan Union was disbanded and the Independence could be seriously sought. 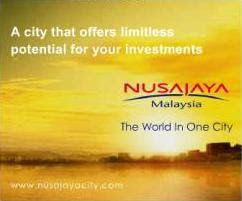 Abdullah need to remove the ghost of the Johor Bridge. Led by Zaki Zahid, his Head of Policy and Dr Vincent Lim, his Chinese Political Secretary, the boys put together a team of ten to hatch on a plan for Johor. This is done outside the usual planning process of EPU and State UPEN.

The monstrous property development was given a political touch for Abdullah to announce. No Malaysian will forget or convince when Abdullah claimed, "Ini semua rancangan saya, bukan rancangan orang lain".

Seeing through the mishmash of the elaborate conceptual plans, WPI is nothing more than beefed-up extension of Nusajaya township development meant to attract foreign purchases. Wan Abdullah Wan Ibrahim, managing director of UEM Land commented in November last year, "I don't think there is enough (local) market to pick it up."

It's basically an expanded idea of Free-Trade Zone from Musa's working days, with Free Access Zone. This way Singaporeans and other Nationalities, including Israelis, can seamlessly enter and exit, own properties, work and lounge around without need for passport. Employers are not restricted to employ locals. Goods can enter and leave seamlessly.

To give comfort to Singaporeans, they call it another Shenzhen. The difference is Hong Kong and Shenzhen are in the same country. And, Singapore Changi and PSA are claimed as the main transport hub. There is even discussion for Singapore to open a Consulate, thats just 20-30 miles away from the border.

All this to bring in some US$105 billion investment over 20 years? That's more than our existing EPF money. Even the biggest project of Mahathir era, Bakun Dam is only expected to cost RM6 billion. Do you think Abdullah's leadership, managerial panache, and technical savvies can ever pull off a project of such magnitude that even Mahathir never would attempt?

After some four months, investors shied from the project. Why would "kiasu" Singapore want to empower Johor with huge capital, without lots of concessions? 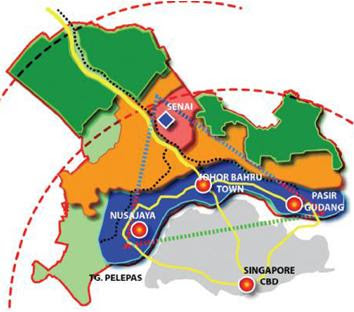 This is not concessions as precedents from Multimedia Super Corridor or Labuan Off-Shore Financial Centre, as Dato Shahrir claim. These are impetus for specific sector of the economy. In fact, one key member of the ten men think-tank, privately questioned the economic rationale of WPI.

Even during the launch of WPI November 4th last year, Johor Sultan still insist on destroying the Causeway and wasn't serious in the use of his name. Without his Majesty's full blessing and heart in it, many Johor Baru locals believed this a super mega project doom for failure.

This is something Abdullah could not afford to do since WPI is practically his life craft. Already, he has bamboozled last year's Johor UMNO Convention, before the UMNO General Assembly, from uttering any word of SJER. Just 2 weeks earlier MB Dato Gani Osman was reported in Utusan Malaysia of his intention to discuss at the Convention.

Can the land code cater for the planned Federal involvement in WPI? Malaysia is technically a Federation of States and not a unitary State. Federal Government cannot interfere in state land matters.

Desperation is written all over when more incentives and even had Musa asked for the revocation of NEP for Johor. Don't forget Musa the fox. That remark is likely an attempt to appease non-Malay voters for the coming General Election.

Will it hold water? Asks any Malay men, don't be alarmed to hear a response, "Langkah mayat aku!"

Lets stay calm. This is not about NEP. Let's not be duped. The problem of NEP is its implimentation. NEP's principle is fairly accommodative and flexible.

He's my brother let us live in peace

for flashing gif! :D will come back to read your article later :D

Reading this just makes my stomach turn.
Just who will gain and who will lose from all these vicious, scheming, plotting acts against one another!

Salam to A Voice.

Its really sickening. These guys with power thinks they own this country and can do what ever they wanted to.
have they forgotten, their position there is an amanah?