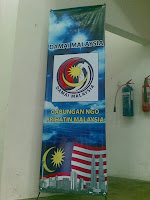 Damai Malaysia, a coalition claimed to represent and supported by 395 NGOs had a closed gathering at the Dewan Kelab Sultan Sulaiman in Kampong Baru, Kuala Lumpur yesterday noon, December 6th, 2007 to make their stand against illegal street demonstration. The effort was initiated by GPMS and Mantap.

After the customary welcoming salutation and opening prayers, retired Court of Appeal judge, Dato Mohd Noor Abdullah, spoke to the fairly mixed raced crowd the quid pro quo agreement between the Malays and naturalised non Malays in the Malaysian Constitiution.

He gave a fairly lengthy explanation in the balanced protection in Malay/Bumiputera rights and non-Malay interests. This attracted an Indian audience to seek the Government to introduce Constitutional Studies in schools. 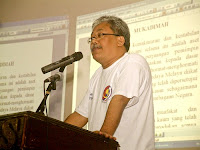 As a strong activist and advocate of Malay education, Roslan spoke on the educational disparity between the local and immigrants under British colonial rules. For more, read his article in Berita Harian dated November 30th, 2007 entitled Renung Sejarah Sebelum ‘Bersuara’. 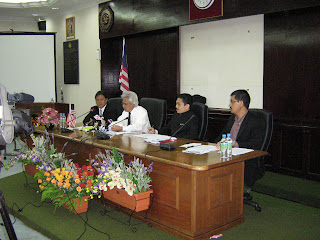 From a fairly subdued affair, it was off to a more stern tone at the Mahkamah Syariah Kuala Lumpur. Pembela and Persatuan Peguam-Peguam Islam Malaysia (PPIM) held a press conference. President of PPIM, Zainur Zakaria, acting as spoke person, delivered a strongly worded statement against the Hindraf demands as below:

PEMBELA refers to the recent street protest held on the 25th of November 2007 by a movement called Hindraf or Hindu Rights Action Force in support of their demands.

While PEMBELA acknowledges the fundamental right of every citizen to gather peacefully and their right to free speech within the ambit of the law, PEMBELA deplores the actions carried out by Hindraf in the pursuit of their demands.

Among the steps taken by Hindraf was to send a letter to the Prime Minister of the
United Kingdom.

In this letter dated the 15 th of November 2007, written by P. Uthayakumar as the legal adviser to Hindraf, Hindraf made several accusations and allegations against the Malaysian Government, and the Muslim community of committing atrocities against Malaysians of Indian origin. These accusations are not only malicious and untrue but highly inflammatory and calculated to incite racial and religious discord among Malaysians.

In the said letter Hindraf appealed to the UK Government to move an emergency resolution in the United Nations to condemn Malaysian Government for committing ethnic cleansing and genocide against Malaysian Indians with the backing of Islamic extremist and terrorist.

Such accusations by Hindraf are not only baseless and untrue but malicious and highly inflammatory with the objective of arousing racial and religious discord particularly between the Malays and Indians and also between the Muslims and the Hindus in this country.

Hindraf has also issued a veiled threat that the Indians in Malaysia may resort to armed terrorist insurrection like that being carried out in Sri Lanka if the Malaysian government do not give in to their demands, the principal one being the rejection of certain fundamental provisions of the Federal Constitution.

PEMBELA views the actions of Hindraf and especially their leaders with grave concern as their actions and threat to resort to armed revolt are not only seditious but can be regarded as acts of treason.

Hindraf now seeks to use these malicious and baseless allegations to garner international support for their cause and have despatched one P. Warya Moorthy to undertake this campaign.

Hindraf has also threatened the Malaysian Government, in particular the Prime Minister of Malaysia, Dato' Seri Abdullah Ahmad Badawi, that they will relentlessly pursue such campaign unless the Malaysian government meet their leaders to discuss their demands. PEMBELA condemns such attempts at blackmail and intimidation as totally unacceptable.

The events behind HINDRAF's actions are reminiscent of the events which led to the May 13 tragedy in 1969. PEMBELA therefore condemns the highly irresponsible actions of Hindraf, especially their leaders for fanning the fires of racial and religious emotions and urges the Malaysian government to act firmly, before racial and religious sentiments become uncontrollable.

1. Ban the movement called Hindraf;
2. Take firm legal action against the leaders of Hindraf; and
3. Not to entertain any demands by Hindraf for any discussion or meeting with the Malaysian Government.

PEMBELA also views with concern statements issued by other organizations echoing the threat by Hindraf that the Indians may have to resort to armed terrorist insurrection if their demands are not listened to by the Malaysian Government.

PEMBELA considers such statements as irresponsible, more so coming from organizations that demand others to act within the ambit of the law.

Zainur went through with the press the seditous, false and threatening clauses stated in the provided copy of Waytha Moorthy lawsuit against the British Government at the High Courts of London. The copy has since been withdrawn from Hindraf's website.

One ludicrous demand made was to seek declaration for the Reid Commision Report and Malaysian Constitution as null and void. He explained that this ridiculous demand will mean the impossible cancellation of non Malays citizenship.

"I think it's quite unlikely we'll head down that path towards a civil war, but there's always the possibility. Some of the uneducated may resort to violence."

Believed Rocky and Pasquale had the scoop.

He said their position is similar to Karpal Singh, DAP MP's news report and Hj Hadi Awang, PAS President in their meeting with him the day earlier.

He was asked of Anwar Ibrahim's support for India's right to fight for Indians. After qualifying himself as former defense lawyer for Anwar, Zainur strongly criticised Anwar for attempting to gain political mileage out of the situation. He cited Anwar for talking without understanding the legal implication of the legal claims. As former DPM, Anwar should have understood the his supporting words is tantamount to inviting other countries to meddle in the internal affairs of Malaysia.

Rocky, who highlighted this news report earlier, posted link to the full the transcription of the interview in Anwar's blog. He felt the Indian newspaper did not do justice to Anwar. Yes Anwar is presumably a blogger. Fine, bro. After he covered all bases, whats really his stand?

Bugger opps ... blogger. To a political animal, a monkey that votes is of value. Shouldn't there be a point where politics ends and principle and interest take priority?
at 12/07/2007 11:51:00 AM