MyKad for Petrol has scam all over, Why didn't Ismail Sabri smell it? 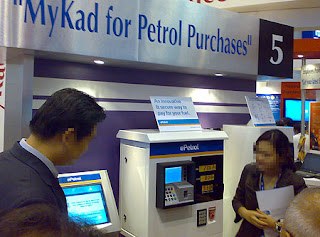 On Thursday, the Star reported that the new Government’s proposed fuel subsidy scheme based on the engine capacity of vehicles and using MyKad "has apparently been shelved." This blogger heard the same and it shows the PM is listening to the people.

The Star quoted some source expressing frustation for the shelving because it seems they have done a loty of work.

The manner The Star wrote the report is such the country desperately need a no subsidy and market driven retail oil price. One can only feel these commentators have ulterior political motive to see BN lose the next General Election.

But what boggles the mind is why these dumb asses can't see the MyKad for Petrol smells of a scam from far away.

Before answering that, read the posting by Paul Tan here for information on the new subsidy scheme.

The Malaysian Instinct viewed it as impractical. The article reproduced below:

Recently, government has announced a new fuel subsidy mechanism set to be implemented on May 1 which will see the amount of subsidised fuel based on the engine capacity of a vehicle.

The revamp is being done to lessen financial burden on the Government, which spends billions ringgit each year to make petrol and diesel affordable to rakyat. However, the initiative to entail the use of MyKad for fuel purchases, seems to be not a good idea.

Malaysia’s concern that the new subsidy scheme which depends on MyKad for verification and transaction, could be troublesome for consumers and petrol station's operators.

This could possibly create hassle and congestion as people need to go through many verification processes and extra devices to identify their vehicle capacity, economic status, and the fuel price they entitled to.

Even though, MyKad will be functioned as a debit card where people can reload it upfront and use it later, but still people facing a messy time consuming to verify the MyKad and the process will even take longer if payment is made using a credit card or in peak time.

One more thing, it is envisaged that the scheme will be based on consumer's nationality. Absolutely for Malaysians and totally dismissed subsidized petrol or diesel for foreigners.

As such, the need for MyKad to purchase petrol is mandatory. The question arises as to whether it is eligible to those having foreign spouses could use their MyKad to buy fuel for their husbands or wives.

The subsidy would be capped and limited to cars below 2.0cc which mostly owned by low and middle class citizens, whereas owners of cars with engine capacities bigger than 2.0cc would not enjoy it.

Some automobile experts have decried a new structure which merely based on engine capacity, does not solve any problem. They claimed, fuel consumption is not just about engine capacity but also engine technology by the manufacturer.

They are also suggesting the government to explores alternative means of reducing the overall cost of driving because, as the oil crisis in previous years have demonstrated, there are times when sustaining the petrol subsidy is simply economically unviable.

On the other hand, luxury car dealers believed the new subsidy system based on engine capacity is flawed and likely unfair. The luxury car owner is already more expensive petrol.

Hope the government will consider the scheme very carefully before implementing it.It may backfire and cause more frustration to the rakyat.

The main objective of the government is to remove petrol subsidies and yet ensure that those in need of assistance would receive it correctly. But the worrying factor is not so much the price but rather the mechanism to be adopted.

One former American President use to say: If you can't convince, confuse them. But that remark was meant for politics and political propaganda, not for business and government policy.

That is unless decision have been made by some stakeholder of the proposal. Since it is difficult to sell, confuse them but still insist to approve.

Kudos to our PM who in his overdrive "rakyat diutamakan" mode, sensed the scheme is simply confusing and cumbersome. Perhaps he sense a scam too.

Those related to the project could neither promote nor convince others of the idea but are seeking support and help from every other groups in town. And they are protective of a certain information.

To enable the MyKad for Petrol to work, all petrol stations must be a equipped with a certain cardreader. Who pays for it?

It is definately Government and not the petrol station operators because it Government that wants to implement the scheme. Government is as good as a sure paymaster.

A cardreader like that would cost few thousands. Consider the fact that all the petrol station in the country must have the cardreader before May 1st to enable their customer to get petrol at subsidised price. You are talking multimillion supply deal.

There is this cardinal rule in corruption. Whack em at the front end.

Before some sceptics get political and claim me creating a mountain out of an innocent necessary capital expenditure just because there is a Khairy associate in the Domestic Trade and Consumer Affair Ministry, consider this information.

Do they know that only 15% for the police fleet of patrol cars is equipped with cardreaders?

Don't ask me how this blogger know about the 15% but the point is the police is in urgent need of cardreaders and yet aren't getting sufficient budget for it.

With expected business from police yet to crystalise, one can speculate someone in the cardreader business must be thinking of a scheme to create a must-buy-now situation. That someone whispered the scheme to someone high up. That big shot saw the oppurtunity in the new petrol subsidiy scheme.

One wonders why Ismail Sabri can't smell the scam from near.

Imail Sabri was the one who reversed the decision and not the PM. The PM telah di maklumkan.

Sabri is slacking away & drifting yet there's a lot of this type of minister presently in the cabinet.

That's the thing - Jibby has to start to show some affirmative action you buck up or ship out to this ministers!

As for Sabri, I trust theres a few
complaints and sceptical comments has been around for some time now.

Isn't it obvious another case of shoot in the mouth disease ala² Yatim who needs Internet etc.

*Yawn* bro, scheme sana sini semua ada - we all know that in this boleh land everything is possible no need to stressed on the Police scheme which whisper up in the above lah. We need to do something about them come next GE!

To be honest, the petrol subsidy matter is getting out of hand. We are beginning to see flip flops after flip flops already now.

DS Najib must be firm and I tend to think that Syed Ali's recommendation for free float is making more sense now. Allow the market to adjust and provide a gradual removal of petrol subsidies. A timeline will be good.

Malaysians can benefit from other form of Government benefits, need not be petrol subsidies. The introduction of MyKad could increase costs actually and cause the whole thing to get out of control, messy.

"But what boggles the mind is why these dumb asses can't see the MyKad for Petrol smells of a scam from far away."
You just mentioned the reason... they are really dumb, these ministers.

So what good solution are we offering here?

It is like ePetrol & eDiesel system for LKIM. The card Reader price to government is around RM 10K. The supplier is IRIS. The company implemented it is the same company that develop ePetrol & eDiesel. The main person behind it is the son of one of the minister that didn't win the election. The mastermind is the husband of the minister. They sub the system to a chinese company.

The most important solution we have provided here is to not get some wastage and impractical solution be implemented.

Solution need information and if Ministry of Domestic Trade and Consumer Affair care to divulge, solution can be forwarded.

The rush and need solution should not act as an excuse and provide legitimate excuse for corruption and not well thought out solution and spending be made.