Too early for a "kesyukuran" PC for PKR 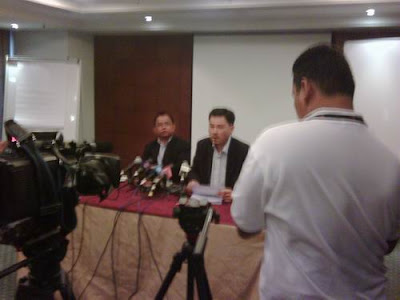 Last night, former Deputy Chief Minister for Pulau Pinang, Ahmad Fairuz submited his application to join UMNO. SOurce told me that PKR held a press conference to express kesyukuran with the departure of Fairuz from PKR.

Ahmad Fairuz was the first victim of the DAP's "dictatorship, chauvanistic and communistic" Government of Penang. What was not known then was of Lim Guan Eng's attitude to any critical views and dissent to "fix" them with personal attack.

In the case of Fairuz, he was accused of abuse of power in some quarry deal, purchase of cars which was his entitlement, slackening in his job, and etc. It is believed Guan Eng had spread rumours of the personal attack including through the opposition blogs and was picked up by pro-UMNO bloggers.

Fairuz was investigated and cleared by MACC later on the quarry deal much to the chagrin of BN campaigners wanting to use it against Pakatan Rakyat in the Permatang Pasir by-election. But it was too late, for he had quit and Dr Mansor a close Anwar associate was standing in Fairuz's constituency

It's hardly 24 hours since Fairuz application to join UMNO. This morning Nibong Tebal PKR MP, Tan Tee Beng who is facing disciplinary action by the party has announced quit.

In the press conference, he expressed his frustation to the much expectation of PKR in bringing change as per the slogan Harapan Baru. He said that will not happen under the current leadership which he described as cara politik kuno mengikut kesah dongeng purbakala.

The rakyat has been tricked by their promises and lofty ideals.

Tan expressed several reasons for his leaving PKR. First, he cited PKR provide no room to express critical views. He said they did not investigate and look into the matters he has raised with regard to issues in Penang Government. It seems PKR cannot be criticised and contracry to what the public is made to believe, do not celebrate differing views.

Second reason, the Penang Government habitually resorted to dirty tricks of character assisination whenever criticised and issues raised. This can be seen repeatedly happening.

This happened when the issue of local council member was raised by PKR grassroot and it went to the extent of one PKR member being bandied as Muslim terrorist. Again when Dato Zaharain Hashim and Tan himself criticised the much triumvirate of terror in Penang of Lim Guan Eng, Jeff Ooi and Ramasamy made personal attacks to the point of accusation of corruption against them.

Third reason, Tan cited PKR has sacrificed their principal in their overanxious pursuit for Putrajaya. They have ignored their responsibility to the people. Anwar has closed his eyes to the problems in the Penang Pakatan coalition and complains against Lim Guan Eng.

Fourth reason, Tan expressed his uneasiness with the dictatorial manner of administration by Lim Guan Eng and described Penang as a "kerajaan milik keluarga." He said many have become Pak Sanggup who merely shy away from the problem and let the reign of terror continue.

Before PKR Nibong Tebal, upon instruction from DAP Nibong Tebal, call for a kesyukuran press conference like that on Fairuz, it is too soon.

Former PKR Secretary General, Datuk Salehuddin Hashim who was present next to Tan at the press conference said he expect more than 10 PKR MPs are leaving. He confirmed he has quit PKR too.

Before Anwar and any Pakatan leader resort to conveniently blame UMNO, show first where is the UMNO hands. The problems are emanating from within PKR. Neither are the leaving MPs joining BN but are just going Independent.

Zulkifli Nordin has returned from South Korea and facing the disciplinary committee today at 3:00 pm. So hold on to your kesyukuran PCs.

When all the rubbish is swept away there is nothing much left in PR.What a pity!

PR is a GREAT party. They did NOTHING wrong. Whoever opposes the PR is RUBBISH! It’s not PR’s fault more and more its members quit, its UMNO’s. Like I said, PR is always RIGHT!

The lists goes on and on – all BN’s fault

Precisely, BN will always use money to buy rubbish and we the people, thank them for that. UMNO is a corrupted, evil party and they require these type of people to joing them just like the previous corrupted katak from Perak. So, UMNO please take away all the rubbish. And please rename your party to Barisan Sampah.

PR is full of rubbish. BN recycle them.