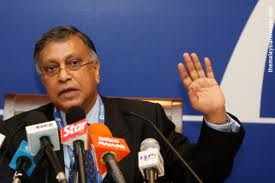 Tan Sri Halim Saad's writ of summon before the Prime Minister announced Barisan Nasional's candidate list may have denied Tan Sri Nor Mohamed Yakcop's his chance to stand again as Member of Parliament for Tasek Gelugor.

Halim had also denied PAS candidate, Dato Abdul Rahman Maidin the chance to get even for and old score. Rahman was threatened before with investigation by Nor Yakcop in his quest for MRCB, after it was sold by the empat budak Melayu of Realmild.

Tasek Gelugor Division head, Dato Shabuddin ran instead for BN. But, he had to take on as well the former UMNO Division head and former Agriculture Deputy Minister, Dato Shariff Omar who ran as independent. Sharif was sore with Nor Yakcop for betraying a gentleman agreement before he gave way for him to run in 2004.

All this only ended Nor Yakcop's political career and position as Minister. A plum job awaits and he could continue to do the same nonsense as he did before.

When dropped as Minister, Syed Hamid was awarded Tan Sriship and given the highly influential position as SPAD Chairman.

A corrupt politician can make more than a few spuds, to say the least. This is not accusing Tan Sri Syed Hamid will reward himself with thousands of taxi permits like a Minister still in cabinet used to do.

Rafidah was also awarded Tan Sriship. Instead of continuing to face pressure in public service, Tan Sri Rafidah Aziz took up Chairmanship in Air Asia X and Lion's Megasteel. Both positions are opportunities to harness her political influence and knowledge in Government policy formulation to further commercial interest.

However, even the illustrous Rafidah was nothing compared with Nor Yakcop. The Malaysian Insider reported the same observation below:

Former tourism minister Ng Yen Yen is expected to take up her position as the chairman of the Malaysian Tourism Promotion Board (MTPB) despite her party, the Malaysian Chinese Association's (MCA) avowed stand not to take government posts due to their poor election results.

The Sun Daily reported today that the MCA politician appointed herself to the position just after the dissolution of Parliament and while she was still the tourism minister.

Her appointment is likely to become a bone of contention and the source of ridicule. Already, opposition politicians have been actively tweeting about Ng's new position.

Ng did not defend her seat in Raub which as expected, fell to the DAP. Her tenure as the tourism minister was pockmarked with controversies over payment of RM1.6 million to set up a few Facebook pages.

Also enjoying a new lease of life after the elections is Datuk Jamaluddin Jarjis, much criticised head of Barisan Nasional war room.

He and members of his strategy team have been blamed for Datuk Seri Najib Razak's unsuccessful attempt to regain two-thirds control of Parliament, with critics saying their predictions had little connection to the pulse of the voters.

Jamaluddin is now a special advisor to the PM with ministerial status. He is also the chairman of PR1MA, the company set up to build affordable houses for those in the middle-income category.

Former Minister of Economic Planning Tan Sri Nor Mohamed Yakcop is now the deputy chairman of Khazanah Nasional while former Information Minister Rais Yatim is in the running for a top overseas posting.

Several other former Barisan leaders are also expected to take up positions in various government agencies, in what is seen as a reward for their contribution to Malaysia.

These leaders never fade away, but continue to be part of the public sector with heftier pay checks and not much of the responsibilities of their former posts.

Politics pays, for a long while. 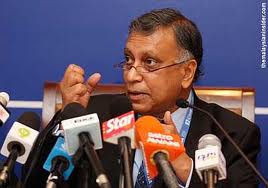 From only a member of the Board of Directors of Khazanah, he was elevated to the position of Deputy Chairman of Khazanah.

Nor Mohamed's appointment was nominated by Prime Minister and Chairman of Khazanah, Datuk Seri Najib Razak, it said in a statement.

He will also be appointed as chairman of the upcoming Khazanah Research Institute, it added.

Nor Mohamed joined Khazanah's Board of Directors on Nov 12, 2002.

He was previously Minister in the Prime Minister's Department in charge of the Economic Planning Unit. -- BERNAMA


That is higher than another noteworthy Member of the Board, the Minister of Finance II, Dato Husni Hanazlah.

The farewell dinner was merely ending his hands in Government but maintain his deceitful hands in the Malaysian corporate scene via the GLCs. It is returning to his former role in the so-called GLCs Transformation. This time around it could be given another branding.

Dato Najib thought that the Deputy Chairman position carries no power, thus it could balance the public's negative view of Nor Yakcop and Tun Dr Mahathir's kinship for him. In no time, the mamak Nor Yakcop manouvered to empower himself as Tan Sri Mohd Nor Yusof (current MAS Chairman) vacated the position of Chairman of Executive Committee.

Khazanah Nasional Berhad (“Khazanah”) is pleased to announce that Y. Bhg Tan Sri Nor Mohamed Yakcop, who assumed the role of its Deputy Chairman on 3 June, has also been appointed as the Chairman of Khazanah’s Executive Committee (“EXCO”), effective on the same date.

The decision was made at Khazanah’s Board of Directors (“BOD”) meeting, which was chaired by the Prime Minister YAB Dato’ Seri Najib Tun Razak yesterday.

Tan Sri Md Nor Yusof, the previous Chairman of EXCO since 1 April 2006, remains as a member of the BOD and EXCO.

According to the Khazanah website here, "The Board of Directors is assisted in the discharge of its duties by an Executive Committee and an Audit Committee established by the Board."

This position essentially gives him executive level power and to determine the placement of people all over the investee companies of Khazanah. He will be creating more Azman Mokhtars, Azman Yahyas, Shahril Redzas, Rahman Ahmads, Wahid Omars and Ismee Ismails. 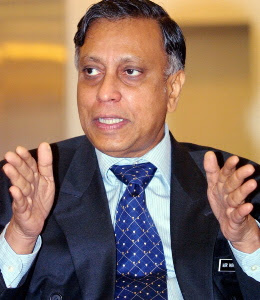 Before public outcry on his appointment can reach the PM, Nor Yakcop has already made another move to make himself more indispensible.

The soon to be formed Khazanah Research Institute (KRiS), will serve as a thought leader, by providing the government with input concerning the country's economy and socio-political scene.

"Apart from macro economic and socio-political issues, there will be others such as in-depth taxation, faced by middle-class Malaysians," Nor Mohamed, who is also the KRiS chairman, told Bernama.

KRiS will assume the existing functions of the Khazanah Research Division that has been in operation since 2004.

Nor Mohamed said the new institute would complement current think tank groups, as all its studies would be compiled and brought for discussion and presentations.

"There are already a number of think tanks for the Prime Minister. We will work together with them.

"There are some issues that we need to solve as soon as possible to achieve the developed nation status. So, working together, will accelerate the decision making process," he added.

Najib, who is also the Khazanah Chairman, had late last month proposed Nor Mohamed's appointment as the deputy chairman effective June 3, 2013.

Nor Mohamed, 66, a former Minister in the Prime Minister's Department in charge of the Economic Planning Unit, was also appointed chairman of Khazanah's Executive Committee. He joined Khazanah's board of directors on Nov 12, 2002.

Khazanah Nasional is the investment holding arm of the government. 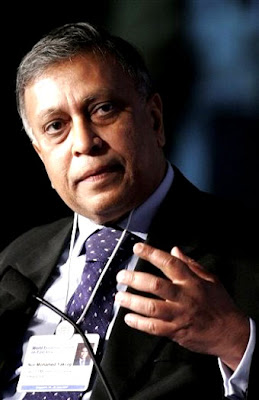 Will the more think tanks make it merrier for PM to decide on issues or only the preferred ones will get better attention over the others?

Thus, what was really meant by: :
Does it has implication of alienating further the base supporters to BN that voted them back or still the dream notion of enticing the 94% of the community that rejected  BN?

Knowing the way Nor Yakcop thinks and does things, his failures, his insidious manouvers and cover-ups, and his questionable dealings, it is not a comforting prospect that the outfit will be another conduit for the same adviser that resulted in the dismal performance of BN.

One will find here another Adviser on a survival mode doing the same thing to counter call by Tun Daim to fire all of the President's men.

There are those that argued Nor Yakcop had contributed immensely as the architect behind the Selective Capital Control that provided financial stability to counter the 1997/98 financial crisis. Thus, his past sins for breaking the law and causing billions of losses should be forgiven.

But, it does not make sense that he be further rewarded, empowered and revered. It is unfathomably imprudent that he be allowed to continue to cause many more billions lost and suspiciously leaked out of the system. What more, the latest Halim lawsuit expose his dealings for government as fraudulent and made the government defaulted on it's agreements.

It could only mean that the socio-economic cost arising from the numerous and continuous disaster inflicted by Nor Yakcop on the rakyat and nation are either not sufficiently known or appreciated. Perhaps, somebody is putting a blind eye to all that is happening for lack of an acceptable reason.

The problem is the public has no more tolerance with the ruling BN repeating past mistakes and today's more transparent society will ensure an unforgettable political lesson.

If NMY upgraded from BOD to Deputy Chairman of Khazanah, BigDog's No 1 Idol with fake MBA from top university in USA, Azeez Mat Rempit Rahim, will be upgrade from mat rempit to Chairman of Tabung Haji effective 1 July 2013. Only in Malaysia.

Bro.,
DEPRESSING la... I just TOTALLY gave up on najib&co.. really hopeless, he's worse than a sleeping PM, he's a WALKING-DEAD PM!! No brain at all!! Memang gone case for GE14... maybe I'll extend my sojourn in Bahrain till all these "political haze" clear up once and for all! In fact, sometimes I feel that its BETTER to give Anuar a chance la... that bad you know... really hopeless case with najib...

What happen to the police report on Abrar capital
NFA?
Amazing.

What aout the contract to copy all the file in Inland revenue iven to Kalimullah.
$800 .
Cool bro.

He said for what purpose.
Somebody make a lot of money in this contract.

Well, I am more interested in watching on how the Halim saad suit will proceed in court.I think the court will only look at the legal document between both parties to determine whether there was a breach of agreement.Any condition precedent ?.Since we are not a privy to the said agreement,we will patiently wait what menifest in court.
On the rest of story there is difficullt to sustain the truth but it is a good reading for the rakyat.
I hope PM Najib will read this blog so that damage control could be executed.Otherwise PRU 14 is a forgone conclusion.


Either Najib's ball being hold by somebody or he is ball less actually.