Rumours from the White House 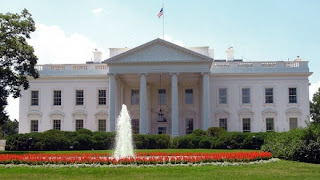 The current administration has an obsession with the American President, Obama since Dato Dr Jamaluddin Jarjis was sent to Washington to fill the position of Ambassador to United States.

The whole civil service machinery have been instructed to focus on his upcoming visit in September that no one seemed to be concerned with policy or 2014 budget discussion.

However, the astute observer fear that the call of support may have it's price in the form of the Trans  Pacific Partnership Agreement (TPPA) (correction). We were made to understand that in this region, it is only Malaysia that has not signed this dreaded agreement. [Read here and here.]

The neo-liberal advisers in the likes of Omar Ong and Nor Mohamed Yakcop are cheering for Najib to sign. But, it is the death nail to our economic sovereignty and will sent the majority of Bumiputera back to colonial days poverty..

However, the White House rumours we are writing about today is not of Obama's but of Tengku Razaleigh's Jalan Langgak Golf home in Kuala Lumpur. 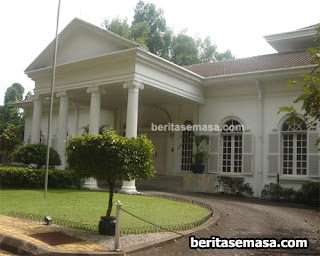 Talks of Tengku Razaleigh aspiring to be Prime Minister has not stopped despite him being in a late age of 76.

It is partly because since 1984 (save for his years in Semangat 46 and a near miss in the 1990 general election), Ku Li, as he is seldom called, has consistently offered himself for the position of party Presidency at every UMNO party election.

Nothing less, not even to run for Vice President when he returned to UMNO, even though he has never held the position of Deputy President.

And, in recent years, it was kept alive through great spinning by online news.

These spinning can be as absurd as Ku Li's boy, Jadawi's claim that Tun Abdullah Ahmad Badawi will vacate his position for Ku Li in weeks after he swore in as Prime Minister in late 2003. No politician would ever do that, not even a sleepy one.

During the "reign" of Abdullah, much of the spinning by Ku Li's boys on Malaysia Today came in the form of a theme called National Correction. When Najib became Prime Minister, it was spinned by Raja Petra (not Ku Li's boys anymore) as one of the Third Force. 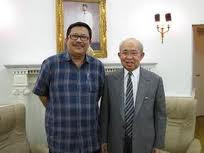 Playing the same chord was blogger Sakmongkol aka Dato Ariff Sabri who described Ku Li as the only person capable of putting Malaysia on strong footing. [Read here] 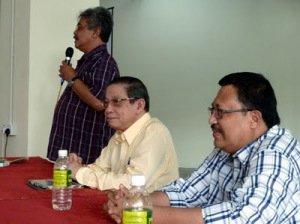 The suspicion is DAP's former Pekan assemblymen Dato Ariff Sabri's loyalty is with Aspan Alias's boss Ku Li. Sources claimed that they are parked in DAP to wait for the right moment and there are many of them spread all over in DAP, PKR and PAS.

However, someone told us that Aspan have been berating on DAP's multiracial claim in his blog lately


KUALA LUMPUR, June 13 — Tengku Razaleigh Hamzah has been meeting more MPs from both rival coalitions this week in a bid to get elected as prime minister after Parliament convenes on June 24, say sources.

The Malaysian Insider understands the Kelantan prince has initiated the meetings at his White House-styled residence in Langgak Golf here, to discuss strategies to get enough numbers in the 13th Parliament to take Datuk Seri Najib Razak’s job.

He would need 112 votes, including himself, if a motion is approved for the 222-seat Dewan Rakyat to choose a prime minister. But is still doubtful if he can get the numbers to unseat Najib.

Source from one Ku Li's boy said there is a discussion towards a vote of no confidence. PAS and DAP is with Ku Li but PKR could not agree. They insist on Anwar to be the Prime Minister.

But that would not attract the UMNO MPs willing to support Ku Li. 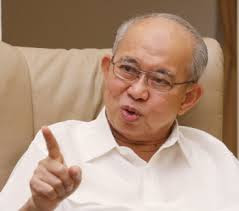 We questioned the feasibility of only Ku Li, the 17 disgruntled BN MPs, 21 PAS MPs and 38 DAP MPs to carry a motion of no confidence. It is only 77 votes to far from the 112 votes.

Assume PKR changed their mind, it will then be 107.

Same source claim confidently that there will be more coming from BN. Without divulging his secret plan, he claimed there are lots of disgruntled UMNO MP.

Perhaps so, because Selangor and Johor are not happy too with the cabinet appointment mathematics. Dato Ahmad Said of Terengganu was not happy with attempts to remove him from his MB post. Dato Adnan Yaacob may have some issue since he has taken a different tune to voice for a contest.

Disgruntled? Yes but is it enough to crossover. We have a different mathematics.

Jahabar may have jumped the gun on Ku Li to conclude that it is a preparation for a coup on Najib. It should make the first day of Parliament on June 24th an interesting watch but Zainal Epi of The Malay Mail has a more plausible story. Extract below:

THERE is a move to change the political system that will reflect the racial breakdown of the country. The idea is to formulate a political platform — not a party — that represents every race in which none will feel sidelined.

Heading it are 17 MPs from Sabah and Sarawak who met Tengku Razaleigh Hamzah on Monday to find ways to change the political system that can truly reflect the true racial breakdown of the country.

They discussed the current political scenario where race had become the focus of each party despite being under an umbrella that is reflective of racial representations according to the population.

The MPs expressed their worry given the trend had divided the population and mending them would be not be as easy and quickly.

Sources told The Malay Mail that the meeting did not conclude with resolutions or decisions, but suffice to say, it could be an impetus for other MPs to think and, if they have sufficient numbers, would move the motion in Parliament.

One of them said it was not a move to oust Prime Minister Datuk Seri Najib Razak ....


The source also said that for the time being, Ku Li would take the opportunity to submit a set of "suggestions" for Najib. Failing which he will ....

Whether Ku Li's team has their act in order, it cannot be ascertain.

We will have to wait and see. It is easy to sense of movement when they are meeting people everywhere and the indication but not necessary confirmation is whether it is attracting audience at the ground.

To a political player, polarisation is only a facade. When the tree shake, it could be wind blowing.

However, that approach does not put Ku Li in an advantageous position. He has his aura and past achievement but he is not known to the current generation of political players.

Nevertheless, Ku Li is not a novice in this game. 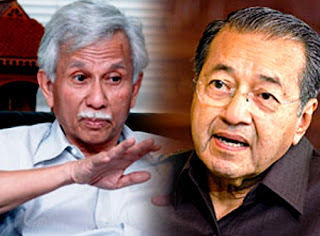 The thing with old timers like Tun Dr Mahathir, Pehin Seri Taib Mahmud, Tun Daim, and Ku Li is that they have history behind them. Cheap character attack does not work.

Their every move is not so simple and easy to read. They know what everyone is thinking, what everyone usually do in every situation and what is the likely outcome. 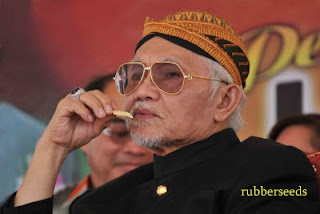 Their ability to read and anticipate makes them many steps ahead.

If they can keep up with the times, their every move can be deadly. Mind you, Ku Li is one political rival that Dr Mahathir respect.

When it comes to permainan orang lama-lama (old timers' game), we step aside to observe and learn. They have too many tricks up their sleeve to be able to read.

Anyway, if such info had leaked to us, it would have leaked to Jahabar Sadiq too.

Jahabar, whose portal is now in search of a new direction and funder since it is likely to be running out of fuel to burn and some 30 people had left. He needs to get a new political master. 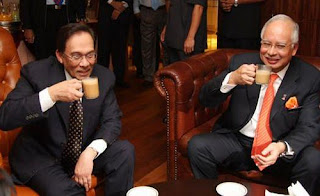 He thought the story of Najib under pressure due to his advisers would make Najib publicly vulnerable to rumours and spins. On Friday, an SMS came in:


DS Najib & political arch rival DS Anwar are in Jakarta today fuelling talk of a meeting that could help the PM face down possible rivals in Parliament and his own party after poor results in Elections 2013 (Malaysian Insider).

Any novice political player would fall for it since there is no permanent friends and no permanent enemy in politics. An extract of the report below:


The Malaysian Insider understands that the meeting has been in the works for at least a week, just as Najib is facing a likely challenge in the Umno elections this year end and a possible motion of no confidence after parliament convenes on June 24.

It is learnt that Home Minister Datuk Seri Ahmad Zahid Hamidi, who is close to both leaders, has been tasked to facilitate the meeting. He is in Jakarta for a bilateral visit.

"A meeting has been set up with Najib before Anwar meets Indonesian President Susilo Bambang Yudhoyono on Satuday," a source told The Malaysian Insider.

Aides to both leaders are tightlipped about the meeting but sources say the duo have a common interest in preventing other challengers for the prime minister's post.

Naughty of Jahabar trying to implicate Zahid. He is not in the position of weakness in UMNO to undertake such initiative.

Nothing definite of Malaysian Insider's understanding and tight lipped aides.

Sentiment seemed to be against him but Najib is still in a position of strength. Najib-Muhyiddin pact is still a solid combination in UMNO. The possibility of Sabah and Sarawak leaving is unlikely.

So, a pact between Najib and Anwar is most unlikely.


If there had been any inter-faction and coalition pact, our reading is that it would be a Pak Lah-Anwar-Ku Li pact. The problem is Ku Li will never be Anwar's underling and Anwar believe it is his time soon.

Most important, Ku Li is not at the age to do any more political battle.

He wants to keep his history intact and keep talking so that he will one day have the thrill of saying "Hmm ... I've warn of this before."

If he does take such risk, he must be absolutely sure the battle will not end with another lose. The last a royal, gentleman and statesman like him would do is to denigrate himself and be called a buruh kasar. That's what a few MPs said after the meeting as told by an East Malaysian-linked source.

The rumours may go on and Jahabar can still stretch the spin for a few more days. But, he has not too much time to play this.

Anwar's propaganda, to dispute the election results and EC and his boycott of Parliament and swearing in, which PAS, DAP and Azmin are not going along, will end by June 24th.

Najib's will be left with his real problem of shaking off his incompetent advisers and officers. He should be worried because he seem to be making one too many mistake [Read Syed Akbar here and Life of Annie here] and someone is trying to be a puppeteer. [Read Apanama here.]

They are not thinking right and dragging him down.

Najib Doesn't Need his Advisers to drag him down. He is Dragging himself down with the help of Rosmah!

"However, someone told us that Aspan have been berating on DAP's multiracial claim in his blog lately"

Why do you need someone to tell you? Go and read yourself. And yes it's true.

In many Third World Countries failed leaders always try to find a way to come back to take what they forgot to take the first time.

sidenote: We have to be careful of tpp. Govts (meaning taxpayers) could be financially liable for any penalties should any private enterprise fail to upkeep the essence of TPP. plus patents and trademarks (esp medicines) are longer with TPP. Even ciplak DVD, the govt will be financially responsible. No need to mention about opening up contracts and all that la.