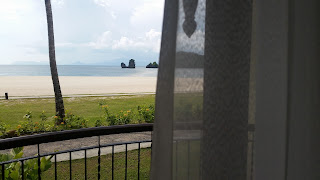 It was looking clear from one room in Langkawi yesterday. However, scenery last week was bad as it was covered by haze. The first night was in Penang and the whole island "disappeared" from Peninsular sight under the haze.

Pity the tourist that spend money for a holiday but end up staying in for few days. The place we stayed over advised the tourist on what to do and provided room service. It was heard that Langkawi airport was not operating on Monday and Tuesday and only revive operation Wednesday night due to poor visibility.

A friend had his Malindo flight going around in the air for an hour before they could land. Some flights had to return back to KL or from where it came from.  It was quite chaotic. A certain airline just abandoned their passengers without anyone at the airport bother to communicate or assist the stranded passengers.

The state of Malaysian airlines. Some take care of their passengers very well and more than making money for the company. Some only care for money but passengers still come. Yet wish to use Langkawi as one of their hub.

You guess it right.

We have been on the road and thus the reason comments could not be released from our last posting. Left right after last posting on Tan Sri Zeti.

It will be throughout this week - doing fact finding for work-related matter, visiting old friends, giving talk and briefing, and to witness an event that could be a turning point. There have been few headline events but nothing substantive on the fact and substance, just hazier politics. 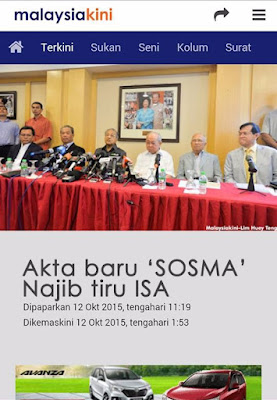 Tun Mahathir, few ex Ministers and veteran leaders of UMNO with a single one from BN made a prerss conference expressing concern on SOSMA on Monday morning.  Sensing it is still a propaganda game which serve to express bias propaganda statements for their political objective to bring Najib down.

Instinct say, it is part and parcel of the hype for the Parliamentary seating which begins October 19th. From there on, it serves to prolong the outcome till UMNO General Assembly in December, we believe.

Will aspect the repeated calling of coward on Dato Najib if he does not go for the vote of no confidence. Should brave it and take the chances. Do the 14 suspects dare vote against Najib since it needs at least 40 votes from BN plus the participating opposition votes to bring Najib?

It is heard 4 is for sure - one from Johor, one from  Kedah, one from Sabah and one more forgotten. But it is also heard that they will not vote against PM but just go absent.

Hope those from Kota Belud will allow for it is chances worthy of taking. It helps Najib to know what to do next.

By noon, Dato Khairuddin Hasan and Matthias Chang was charged.

Khairuddin's lawyer withdraw application against SOSMA. It is not like ISA. If there is a case, it will be taken to court. Not like ISA where detention could be indefinite and offenses undefined.

The latest AG issued a statement that explain in detail their action: 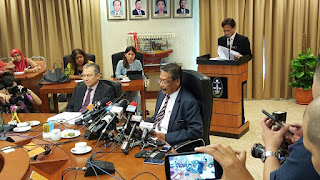 On Monday, 12 October 2015, Khairuddin Abu Hassan and his lawyer, Matthias Chang were charged under section 124L of the Penal Code, read with Section 34 of the Penal Code for attempting to sabotage Malaysia’s banking and financial systems.

The action has been questioned by certain parties, including in the article published in the Star on 12 October 2015, titled ‘Dr M, Ku Li team up to slam Sosma detention of 1MDB critics,’ as being an abuse of the government powers.

The Attorney General’s Chambers clarifies that both Khairuddin Abu Hassan and his lawyer, Matthias Chang are charged under section 124L of the Penal Code and not the Security Offences (Special Measures) Act 2012 (SOSMA).

The Attorney General’s Chambers further clarifies that the Security Offences (Special Measures) Act 2012 (SOSMA) is a procedural law that provides special measures to facilitate the investigation and prosecution ‘security offences”. The definition of ‘security offences’ makes it clear that the SOSMA is not limited to terrorism or terrorists.

In 2014, the list was extended to include Chapter VIB of the Penal Code (Organised Crime) as well as offences under Part IIIA of the Anti-Trafficking in Persons and Anti-Smuggling of Migrants Act 2007. The list was further extended in June 2015 to include the Special Measures Against Terrorism in Foreign Countries Act 2015.

The seven new offences are namely:
These offences were in addition to the reenactment with modifications of certain offences which used to be in the Internal Security Act 1960, namely the new sections 124D, 124E, 124F, 124G, 124L and 124J. The above explanation can be seen in the Explanatory Statement to the Penal Code (Amendment) Bill 2012.

Section 124L, of the Penal Code provides that ‘Whoever attempts t commit sabotage or does any act preparatory thereto shall be punished with imprisonment for a term which extend to fifteen years.’

The Attorney General’s Chambers provides this clarification on the provisions of law that have been applied in the case of Khairuddin Abu Hassan and Matthias Chang to prevent any further misleading statements, regarding the relevant provisions of law.

However, the Attorney General’s Chambers is not at liberty to divulge any facts pertaining to their cases as the matters are pending before the court.

Heard the two had been loud, angry and lepas cakap during interrogation. Matthias did his hunger strike antics but only for 8 days.

It is clear as crystal that the police report, report to financial and securites authorities and attorney office done by both of them led to false reporting by neo-com media which quoted confirmed and unsubstantiated reports by Rupert Murdoch's NYT and WSJ. 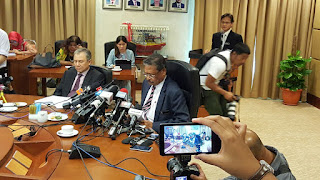 It had affected ringgit badly. Partly helped by Zeti's sabotage by not doing anything.

Whatever it is they have a chance to defend in court. Expect an Anwar-like court antic from Anwar's cousin, Khairuddin. Matthias ... no more contempt of court. Someone said they can't help them him this time.

It is noted that Bank Negara Malaysia did not take more than three days to grant the said permissions on all three occasions.

It is further noted that the relevant ECM forms namely 09A and 06B do not require the applicant to supply the name/s of beneficiary owner or the bank/s accounts numbers of the recipient/s or the manner as to how the funds to be channeled.

The relevant forms for remittance in this case did not require the applicant to state the bank account number and the beneficiary of the same as in ordinary remittances which would enable Bank Negara Malaysia to go one step further to verify where the funds will end up to. Since there is no requirement, the omission on 1MDB officials’ part to disclose is not an offence under the Act.

The officials of 1MDB at all material times i.e. during the process of obtaining the permissions had complied with the directions given, hence the permissions/approvals granted. Until and unless it can be shown that the officials had deliberately or knew or even recklessly provided information that were false in material particulars, they had committed no offence under this Act.

The Bank Negara Malaysia however vide a letter dated 1 October 2015 requested for a review of the decision citing omission on the part of 1MDB i.e. non-disclosure of certain information. As far as omission is concerned, there is no obligation to inform unless requested. In this respect and the fact that there is no new evidence made available, we do not see the necessity to review.

In your face Zeti!

She was also abusing power to attempt to sabotage 1MDB: 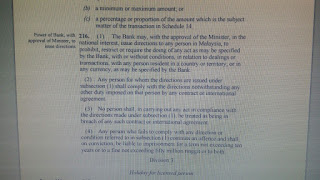 While Matthias and  Kudin is being charged for sabotage, Anwar used to be imprisoned for abuse of power. Will Najib dare do?

Clearly now, Zeti's stance is clearly prejudicial against the government. Why then she decide to finish her term? If she was forced to allow the RM2.6 billion deposited, she should have resign in protest! Typical no class from neo-con's monetarist Central Banker of the Year.

The facts are there and process is clear. Slowly the truth is beginning to surface but can the public appreciate it?

There is too much propaganda and simplistic conclusion made not based on fact or at least a sensible and unarguable basis.

Most likely there will be propagandic allegations that this selective prosecution and why is Tony Pua and Rafizi not charged? Why not charge Clare Rewcastle, Ho Kay Tat, Dato Tong Kooi Ong, and even Tun Dr Mahathir?

Kept being repeated every Tuesday is when will WSJ be sued by Najib. Hope it was not from our recommendation because we wrote asking him to sue.

A lawyer friend was concerned with happenings and public perception. Anyway, excerpt of our reply:

Share your concerns. However, let us not discuss what people perceive.

Hitler said, "All propaganda has to be popular and has accommodated itself to the comprehension of the least intelligent of those whom it seeks to reach." So Najib team's job has to do counter propaganda and proper communication. His general must be clever.

For us with some knowledgeable should discuss factually, logically and pursue truth, not be gullible to propaganda. Tired of too much deceptive propaganda and psywar from both sides. Let us fight lies and untruth.

Que sera sera. What will be will be.

Yes, but the WSJ is still sitting there unsued.

And I doubt that their readership numbers have been affected by the high dudgeon in Malaysia about their reports on 1MDB.

Ms Rewcastle-Brown is still publishing in the UK. Maybe the UK has a different interpretation of "freedom of the press" and "sedition".

Are these symptoms of "hazier politics"? Or just simply "realpolitik"?

Whether 1MDB stands or falls will be determined by the markets and by it's creditors.

Anonymous said...
This comment has been removed by a blog administrator.
8:40 PM