Zeti continuously slept on the job 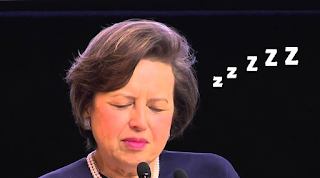 Attorney General statement said the report submitted and application for review by BNM was in insufficient to bring a legal case on 1MDB for alleged offense under para (4) of Part 1 of the Fifth Schedule of Exchange Control Act.


On its part, the Bank concluded that permissions required under the ECA for 1MDB’s investments abroad were obtained based on inaccurate or without complete disclosure of material information relevant to the Bank’s assessment of 1MDB’s applications.

It means Zeti tidor and simply approved 1MDB's application based on as she alleged now as "inaccurate or without complete disclosure" in their assessment to approve in 2009-11.

Through the years of 2011-2015, 1MDB, still maintaining respect for the BNM, claimed in their public response here that they provided information on "the use of those funds have been described in detail in the notes to 1MDB's publicly available financial statements dated 31.03.2009 to 31.03.2014".

Failing to find evidences on 1MDB for more serious crime and failed to charge 1MDB for a Exchange Control misdemeanor, BNM decided to bypass AG and abuse their power to:


Therefore, the Bank has revoked three permissions granted to 1MDB under the ECA for investments abroad totalling USD1.83 billion and also issued a direction under the Financial Services Act 2013 to 1MDB to repatriate the amount of USD1.83 billion to Malaysia and submit a plan to the Bank for this purpose.

Zeti slept on the job in the same manner she slept when RM 2.6 billion came into the country and into one bank account. Do note BNM audit all banks and missed something major in 2013.

In desperation to cover what we said before as the burden of her respinsibilitu is too heavy, she is trying to ensure her legacy is untarnished.

She has to do another blame game this time on AG and 1MDB to cover-up for her incompetency by pinning anything on 1MDB and take the law into her own hand.

Knowing well the USD1.83 billion will settle one third of 1MDB debt, the revocation is intended to start a Bank default, bankrupt 1MDB and cause a financial market meltdown. This is outright economic sabotage!

Any clause in SOSMA for it?

In the first place, it is an encouraging development to know more specifics on the investigation.

Police and MACC is still having trouble with witnesses on the SRC investigation. No wonder MACC Commisioner was furious with the macai trying to hide away. It shows the charge sheet revealed by Sarawak Report os a hoax.

In the meanwhile, 1MDB had "fully cooperated" with BNM investigation by "submitting written answers and sharing relevant documents', and cooperated to allow "detailed witness statements being recorded" from past and present 1MDB members of the BOD and officers.

BNM had submitted their report to AG but the evidence is viewed as not able to hold up in court. Have heard commercial crime police complaining in the lack of passion of BNM investigators thus few prosecution on AMLA.

Thus it is most unfair on Zeti to abuse her power. She approved 1MDB application to invest abroad in 2009-11, and was responsible to monitor or at least go through the reports submitted by 1MDB through out 2011 to 2015.

"As the banker and adviser to the Government, Bank Negara Malaysia provides advice on macroeconomic policies and the management of public debt [read website here]."

Zeti slept on the job and failed to realise 1MDB was not prudent in their debt management.

Obviously, she is acting based on public allegations by Tun Dr Mahathir, Tony Pua, now silent Rafizi, Sarawak Report, The Edge, and many others. Thus far they have provided no proofs of their allegations except spins, propaganda and even fake money trail.

Tony Pua has been constantly barking on the debt rearrangement plan with IPIC despite 1MDB continuosly responding [read here, here, here, here and here]. Looks like Tony is backing Zeti and his evil intention is glaring [read TMI here].

Coincidently, Tony was using it as a diversion to redirect attention from investigation into his involvement with Clare Rewcastle Brown, Xavier Justo, Dato Tong Kooi Ong and Ho Kay Tat. He can't run and risk trouble with the law.

This only means Zeti is incapable making proper assessment in the area of enforcement and resort to take their words as good for another blame game to cover-up for her incompetency by demanding 1MDB to repatriate RM7.5 billion back.

Zeti knows well that it is an essential part of 1MDB-IPIC debt settlement arrangement to generate cash and reduce debt by one third i.e. RM16.5 billion. 1MDB said:


The overseas investments of US$1.83 billion relates to historic equity and murabaha loan investments in a joint venture with PetroSaudi in 2009 – 2011, that was eventually converted in September 2012 into fund units valued at US$2.318 billion. As previously explained by 1MDB to BNM, this sum of US$2.318 billion has been redeemed in 2014 and 2015, with proceeds being substantially utilised. The remaining US$940 million of fund units, are guaranteed by Aabar and have been ear-marked for a "debt for asset swap" with its “AA” rated parent, IPIC, as part of the 1MDB rationalisation plan.

It is, therefore, clear that the original US$1.83 billion sum has either been spent or ear-marked for debt settlement arrangements, that will result in a substantial reduction of 1MDB’s debt, per the rationalisation plan. 1MDB has painstakingly provided multiple detailed written and verbal explanations of these facts to BNM between June and end-September 2015.

The debt reduction will serve to improve investor sentiment and hopefully strengthen the ringgit and the economy. Why then is BNM asking for the money to be repatriated?

Zeti's intention is similar to Anwar-like IMF policy to direct Banks to recall on outstanding loans instantaneously during the 1998-00 financial crisis. By doing so, she is doing an Anwar-like sabotage to bankrupt 1MDB [read RPK here].

Banks will be forced to recall loans to 1MDB and it could a lead to a default. 1MDB already highlighted that "those Permissions, when granted, had no requirement for funds to be repatriated."

One can expect a string of embarassing lawsuits between a government company, 1MDB and government's central bank. Not to mentioned with other lawsuits involving Banks and other parties. It will be watched closely by the global financial community.

Instead of ensuring financial stability, Zeti and BNM risking a financial meltdown of the Malaysian capital  market.

Questions meant to ask and not dishonourably accuse.

The ruler's statement brought a response by the Attorney General office to deny accusation of halting investigation, and up-dated development in the investigation [read previous posting here].

The accusation on 1MDB has been of money laundering, embezzlement, RICO, collusion with auditor, etc. but it turned out to looking to be for online form filing in which the offense is subjective to BNM discretion.

It is like being accused for murder but charged for traffic fines. Fine, it is a bit of an exaggeration. more similar to the perfect set-up on Dato Dr Khir Toyo. Accused of corruption but charged for code of conduct of public servant. Lim Sian See has elaborated here.

1MDB had been sufficiently transparent with BNM. Information are all in the audited financial accounts. When it was presented in 2009-2011, BNM approved. Through out 2012-15,  Zeti did nothing.

When Tony Pua and other distractors made a fuzz over the debt settlement arrangement with IPIC and fake document backed allegations, only did Zeti decided to take the cue.

Zeti been sleeping on the job and now doing another blame game like her inability to manage the currency. As RPK claim here, she is playing politics!


It is glaring that she is subtly doing a sabotage. Each time there is good news by 1MDB, BNM would scuppers it with an announcement.

For example, 1MDB received cabinet approval for the rationalisation plan and to repay the USD975 million Deutche Bank loan in June. Zeti's response to announce their investigation!

Now that 1MDB announced the IPIC deal, good economic numbers are showing and Malaysian Ringgit strngthen, and AG says NFA, Zeti pulls of a tantrum.
If Zeti expressed her wish to finish her remaining two years of her strange 5-years extension, then she better work with the government and not for the political interest of Tun Dr Mahathir, Tony Pua, Sarawak Report and The Edge.

Najib has no intention to dismiss her as Life of Annie claim here. It was Najib that instructed to have the MACC officers return back to MACC. It was KSN and JPA DG that memandai. to do the immediate transfer to PM Department.

However, Zeti better not get involved in document leakage and collaborate to topple the Government through unconstitutional means.

She was rumoured to have given unfinished investigation paper to Gani and the documents inside was the one that got leaked. Rest assured, it is still a rumour.
at 10/11/2015 12:15:00 PM

She slept n let 2.6B transfer happened. If not her successor will let it happen..
just like the AG post..
Hehehe

Anonymous said...
This comment has been removed by a blog administrator.
3:14 PM

zeti must be very good.. while sleeping she can make RM rebounce in a week... better than najib who is awake but pretend dont know what happen to 1mdb

It could be Zeti tidor or her bigger boss the Finance Minister & Adviser of 1MDB the boooges prince just told her to approve la. It amazes me that when Jibbo putar belit duit derma UMNO masuk akaun, guna berapa, baki berapa & simpan dimana was not answered up til now, we busy ourselves with the lesser questions. Dah terang munafik & pecah amanah kita dah tak kesah...couldn't believe we Malays are this low bro.

Anonymous said...
This comment has been removed by a blog administrator.
5:38 PM

Anonymous said...
This comment has been removed by a blog administrator.
9:32 PM

why u are blaming her for the 2.6 billion coming into someone private account?

i never see you blaming the guy who allowed 2.6 billion into his private account, and you yourself know why u are not even trying to blame him, and yet you have the cheek to blame her on that?

I like the new AG...very direct and straight to the point...which is BNM cuai..

Go Zeti. The fact remains that 1MDB break the laws.

Anonymous said...
This comment has been removed by a blog administrator.
9:22 PM

TUAN SYED, BANK NEGARA did not work like as what AG THINKS or you yourself thinks.

BANKING AND FINANCIAL INSTITUTIONS ACT AND EXCHANGE CONTROL ACT are ACTS for banks and financial institutions to abide by and to follow.

Any contraventions of the Acts will be dealt with by BANK NEGARA. All transactions between banks and banks, banks and clients were carried out between themselves, and Bank Negara did not get themselves involved.

Banks and Financial Institutions sometimes purposely wanted to contravene the acts hoping that they wont be discovered.

Thats why BANK NEGARA have a special DEPARTMENT ie Bank Examination Dept to go and check and do forensic audit of commercial banks.

Sometimes BANK NEGARA did not know anything happening in the banks and financial institutions until somebody wrote a flying letter or a whistle blower informed BANK NEGARA.

In case of transactions between 1MDB and Commercial banks, BANK NEGARA only discovered later when all dealings had been transacted already.

Bank NEGARA DO NOT HAVE THE TIME TO HELP RUN AND MONITOR THE FINANCIAL INSTITUTIONS.