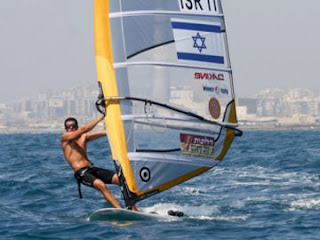 For nothing, foreign media are accusing Malaysia as anti-Jew. There is nothing anti-Semitic about it. It is not about Jew but Israel, anti Zionism and sympathy for Palestinians. Believe Palestinians are also a Semitic race.

When asked by Malay Mail Online, Khairy was quoted as saying:


“We accept the decision by the Israeli Youth Team to withdraw from participating in ISAF YWC 2015. As this is a diplomatic issue, we are guided by the existing policy of the Malaysian Government.”

The Jerusalem Post reported the chairman of the Israel Sailing Association Gili Amirl took up issue with ISAF or International Sailing Federation when Yoav Omer and Noy Drihan could not get their visa 24 hours before their scheduled departure.

Amirl alleged that Malaysian immigration imposed unreasonable conditions like "prohibition on flying their flag or any symbol on their attire and surfboards to show their country of origin. Israel’s national anthem will also not be played if either athletes win the gold medal, as is customary in sporting competitions."


According to the Olympic Council of Malaysia (OCM) Assistant Secretary Datuk Sieh Kok Chi, the conditions set for two Israeli sailors is a normal practice. It was the practise and other Israeli sportsmen have accepted in the past. In 1997 the Israeli cricket team had competed in the International Cricket Council (ICC) Trophy, while Israeli nationals, coach Avram Grant and Ben Haim were part of the Chelsea pre-tour squad in 2008 as well as player Yossi Benayoun who was in the team that came for a friendly with Harimau Malaya in 2011. (Bernama December 28th 2015)

While ISAF took note of the situation and resolving it, the event had taken a political turn in Malaysia.

DAP was criticised by PAS for Chong Zhemin's defense of the Israeli athletes. Where Amanah would take endless potshot at PAS, Amanah took a similar position with PAS to agree with the authorities to bar entry to the Israeli sportsmen.

Some Pemuda UMNO leaders and supporters have come out to defend their "boss". They criticised DAP for being sympathetic to Israel. Naturally, questions are raised towards DAP for the alleged cooperation with Israel by former DAP insider, Razali.

When asked by reporters, Deputy Prime Minister, Dato Dr Ahmad Zahid Hamidi was reported by The Star had a similar tone with all the critics.

“We have a clear stand from the angle of diplomatic relations with Israel and the remark by DAP is something against our policy.”

It looks to be more face saving than a political counter attack or political opportunism.

Maybe Khairy is not entirely to be blame. The Ministry officials advising the Minister should have done their homework. The minimal background check would have uncovered that Israeli are reigning champions.

If the Israelis successfully came out winners again, it would not be fair sportsmanship to deny the sportsmen their moment of glory. Even if it is evil Israel, the sportsmen would want their country given a mention. It would certainly look awkward to not play their national anthem to honour the winner.

The ministry concern is not to be blame. Why.... Simply because this is the policy of our government. The elected government has the right to do that. No matter whether he or she (the participant) is still the champion or not. Simply because it is our policy. Don't blame the ministry involved. IT IS OUR POLICY AND OUR RIGHT TO DEFEND THE POLICY. Didnt like it.... BOLEH BLAH.....FULLSTOP

Anonymous said...
This comment has been removed by a blog administrator.
7:13 PM

Taking on the Chosen people said...

Its good for the malays to take on the Jews.
For the malay masses the jews mythology looms large and the word yahudi itself is a humiliation itself if someone is associated with a yahudi. Which is funny as PAS the great believer in the yahudi evil has appointed and submit to the biggest jew worshipper Hannah Yeoh, as the Speaker for Selangor!

Goldman Sachs was the Jew who lent 12 billion to Najib while taking his pound of flesh at 2 billion ringgit fees! See how smart Najib is.

The Jews are the smartes people on earth. They made the italians and the europeans believe that the Jew is either God himself or his Son.

And then made the chinese like Hannah Yeoh believe that Jew, Jesus Christ is the savior of the chinese in malaysia!