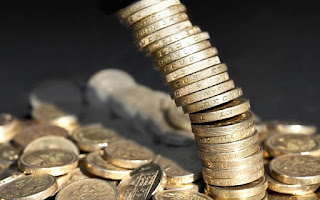 In a speech in Cardiff last Thursday, the UK Chancellor of the Exchequer, George Osborn expressed concern that the recent heightened tension in the Middle East, sluggish growth in emerging markets, low oil prices and volatility in China could drag back the British economy

In addition, he expressed concern with the possible recurring of a long term phenomenon of the 1930s described by economist as secular stagflation [speech in full here in IBT]. His main concern will be the austerity drive he dubbed as long term economic plan will not be sufficient to turn the economy around.

A column in The Guardian the next day [read here] criticised his plan as merely political and is not addressing the real national issue of debt. He didn't raise these threats in last year's autumn statement.

It is almost similar to some critics to the plan to adjust the Malaysian 2016 budget.

The discussion on UK's colossal debt condition has been a long term concern, especially after the debt failure of Greece, Portugal and Spain. UK's national debt is astronomically equivalent to more than 500% of the economy as compared to the mentioned crisis countries at 267% to 363% of the economy.

To understand the situation in the UK, the following September 2014 posted apocalyptic documentary by an Investment Newsletter, Money Week gives a big picture of the problem:

In the event there is a solution in sight, politics and public sentiment are the barrier to the necessary reform and solution.

However do bear in mind that the video was prepared by Investment service provider. They usually suggest the first step to prepare for any catastrophe is to subscribe to their newsletter for suggestions on investment and finance.

A friendly reminder on the intention of fast talking encyclopaedia salesmen. But the facts presented remain relevant.

In a blog post dated November 2014, Steve Keen's Debtwatch had expressed cynicism of David Cameron's warning of the global economic risk then.

His concern was the guide to Cameron's view may not be giving the true state of problem as he cited the failure of the 2007 OECD report to warn of the crisis of 2007-08 as example. It's a usual occurrence with snapshot views or everything remain the same forecast found typically in official reports.

An IMF paper later compound his concern. In June 2015, an IMF paper "cited research by Moody's Analytics that suggested countries such as the UK, US and Canada could afford to live "forever" with relatively high debt shares compared with their pre-crisis averages" [read The Telegraph here].

Another angle to the argument, former Work and Pensions Secretary to the previous Labour Government, Peter Hain was reported by Wales Online in September 2015 denied Britain was in a debt crisis and public spending was under control under the previous Labour government.

It looks quite the usual public debate on the economy in UK although Hain's statement was politically motivated. He had attacked the Conservatives for their “deceit and demonisation” during campaign and Labour campaign for failure to defend it's own record.

So the motivation in Hain statement is politics. Political preservation or acquisition of power are usually blamed for leading to the state of in-denials to any problems. With UK's colossal debt problem, Hain seemed to be in a state of in-denial.

Morning Star online news portal claimed Osborn too is in a state of denial The responded with an article with the headline, "It's always someone else fault".

Seemed no different here in highly politicised Malaysia as politically driven sentiment peppered with illusion of a romantic past is putting the nation in a state of in-denial to the challenges from economic and global realities looking at us in the face.
at 1/11/2016 12:31:00 PM

Annie said...
This comment has been removed by a blog administrator.
11:55 PM