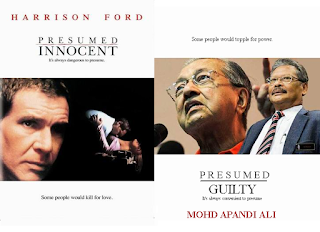 In the movie, Presumed Innocent, Deputy Prosecutor, "Rusty" Sabich (played by Harrison Ford) was chosen to lead the investigation into the rape and murder of a female colleague, Carolyn Polhemus (played by Greta Scacchi).

As Rusty digs deeply into the case, he found Carolyn and the newly elected District Attorney, Nico Della Guardia were linked involved to a bribe to throw out a case. There is politics involved as Nico avoid from being the shortest serving District Attorney.

The legal drama could be titled as Presumed "Guilty" because Rusty had an affair with Carolyn and this led Nico to frame him for the murder. It ends with a court room cliff hanging escape for Rusty. [Watch it online here].

The scenes are still unfolding but still not the end yet.

Apandi responded by accusing Tun M of playing reverse psychology. It was intended as pressure to follow MACC's recommendation and make cases out of it. Tun M's remark appear as though the investigation paper leaked to him and like in the 1MDB issue, he seemed to make his own conclusion.

Apandi has put it on record to state to the press that he will act without fear or favour and in accordance with the law. He will not be pressured by such political game.

At stake is the good name of the office as it is not AG alone to decide. Other lawyers will be involved to study the 3 investigation papers submitted by MACC on the RM2.6 billion, and two other cases involving RM42 million relating to former 1MDB subsidiary, SRC International Sdn Bhd.

That leaves too much trails to do a cover-up. Tun M used to say conspiracy cannot involve many people. It is unthinkable to do so in these days of documents suddenly appearing on websites and social media.

There is always the possibility of the same on the two cases recommended by MACC. AG did so on BNM investigation paper. The moment AG does the usual daily routine, the paid dogs will bark of cover-up.

Media report on the submission was on December 31st, the same day Arul announced the sale of Bandar Malaysia. It as though MACC timed the statement to divert the attention away from the good news.

That led those questioning MACC to suspect them of collaborating with Tun M to set-up Najib and provide the path for the ascension of Tan Sri Muhyiddin. In addition, Tun M made subtle threat on Deputy Prime Minister, Dato Ahmad Zahid Hamidi.

The stuff of conspiracy theories that is difficult for the common people to disregard.

More so, Tun M's remark coincided with rumour of a change at the helm of MACC by The Edge. It makes no sense though for current SB Director, Dato Fuzi Haron to be the replacement. The man was never a crime buster!

MACC could have made the statement to dispel any suspicion of cover-up on their part. They were under such pressure following the Malay rulers' statement in October. That was the month MACC was supposed to complete investigation thus came the direction from AG to record statement from Najib before year end.

It does not jive for MACC to be in-cohoot to play politics and collaborate with Tun M. It is as though MACC expects AG to accept their recommendations. All the while, they insisted to maintain the current principle that the one doing the investigation should not be the one prosecuting cases.

This differs from the American practise in Presumed Innocent. Tun M should know better> It is the same principle applied by ACA, which during his time was under the Prime Minister's Department.


If anyone is to be accused of being in co-hoot to presumed guilty on Najib, it should be Syed Akbar. Not because he was a former committee member in MACC, but because he has been relentless in his blog postings to support Tun M's cause to topple Najib.

In his latest blog posting, he wrote a cerita dongeng of a Bugis in a state of panic after unsuccessful meetings abroad to cut deals to save himself from prosecution. Obviously he was referring to Najib as Bugis. The posting could be reproduced in the commentary when he removes his posting.

Maybe out of fear or even guilt, OutSyed remove his postings daily. He stand a better chance to avoid lawsuit or any possible criminal prosecution by double checking his source. On this one, our source say Najib was never in Tokyo during the year-end holiday season. The last time there was in May during a near earthquake incident.

As a friendly advise, OutSyed should know the limit to his politically motivated mind game. It is improper to question the ibadah of Allah's invited guest to the holy land. Only Allah has insight into a person's intention.
at 1/07/2016 08:55:00 AM

Anonymous said...
This comment has been removed by a blog administrator.
9:40 AM

mk said...
This comment has been removed by a blog administrator.
2:11 PM

Anonymous said...
This comment has been removed by a blog administrator.
8:35 PM

Go away childish comments. Stay in the children's playground.

A Midnite Visitor To "Bat Cave"

It seems that the Bugis Pirate Ship is developing serious leaks, the sails are getting tired and the sea is getting more stormy. The phrase used was 'his soul has left the body'. Traditionally when the soul leaves the body a person is considered dead.

Here it is an euphemism implying he has lost the will to hang on. The nightmare has to end and it will end.

So there is plenty of interesting news.

Firstly I hear talk that there is a Surat Layang going around which has allegedly been penned by some retired Senior Civil Servants and addressed to Mamak Hamster and some other guys in the Civil Service. The gist of the letter is this :

However the same luxury will not be extended to those Civil Servants who choose to become running dogs of the politicians. Dont forget - in the past Civil Servants have gone to jail.

So to those foolish Civil Servants, stop being foolish. Here I am referring the people in the KSU, KSN ranks, the folks in the MACC, PDRM, AG's Chambers etc. If any of you are party to any crime then be assured that you will do the time. Dont say that you have not been warned.

A series of ongoing meetings have taken place between the Bugis and one Other.

Bugis drove himself over at midnite with just two personnel. This is supposed to have happened towards end of 2015.

He offered the Other positions (plural) in government. The offer was turned down. The Other Person made a counter offer. It was simple :

'First you do xyz, then you step down. After that you get yourself the best lawyer that you can find because I cannot help you with all those issues'.

Bugis went home in a whimper. Then Bugis met the Other person again. This time the offer was to at least join as 'Advisor'.

The reply was the same. 'You step down and find yourself a good lawyer'.

Then most recently (just a few days ago) the Pirate Flag was seen at stops in Tokyo, Hong Kong, Dubai and Saudi Arabia.

The Pirate Ship is headed towards a waterfall with no functioning oars or sails. The 'soul has left the body'.

Here is a digression. Have you all noticed that the attack dogs have gone quiet lately. Keruak, Nazri, Azalina, Dahlan and Shahidan have just gone mum. Well there is a reason for this. Since 'the soul has left the body' there are not many instructions coming from the top. Boss sudah almost give up. Without directions the attack dogs have also gone quiet.
.
And now a succession plan is in place already.
.
The MACC report has been submitted to the AG. As that MACC guy said a few days ago, the MACC report reccomends action to be taken.
.
There is no such thing as NFA (No Further Action) in that MACC Report. The AG already got himself into a hot soup when he refused to follow Bank Negara's strongest reccomendation that charges be filed in Court.

If the AG says the same thing again about the MACC Report, the AG is going to get himself into boiling oil this time. So stop looking like a dr_nk*rd and do what is right.
Two other reports are due. The PAC must wrap up its proses but the PAC can be put in the dustbin. They dont amount to anything.

The more interesting man to wait for is the Auditor General Tan Sri Ambrin belum kena Buang. People say Ambrin is an honest man. Naughty people say every man has a price and can be bought.

Where is the Auditor General's report and when will it be ready?

To all the Civil Servants remember this :

The world is a stage and they are all actors.
Nothing is sacred. It is all a photo opp. or a sound byte.

Anonymous said...
This comment has been removed by a blog administrator.
9:20 PM

Anonymous said...
This comment has been removed by a blog administrator.
2:58 PM

I've been blogging more than 10 years. Do not need your advise on blogging. Maybe we can teach you a thing or two about blogging.

If you do not have anything beneficial except insult and hostilities to contribute, then just keep you comment to to yourself.

Our blog is our call! You have no say in the running of this blog. Comprende?