Thought Dato Shafie Apdal said he won't resign but he did. FMT reported yesterday (video available in The Star):

The former federal minister made this announcement – which was broadcast live on Facebook – in his constituency in Semporna, Sabah, after returning from performing umrah in Mecca.

In a 90-minute speech, Shafie spoke about Umno’s decision to suspend him last month for allegedly collaborating with the Opposition and questioned why he was not called to defend himself.

“So we punish first before investigating?”

He also stressed that he had never worked with the Opposition.

That last line is laughable.

In a previous posting on Shafie, two videos exposed him collaborating with Sabah PKR leaders to frame allegation of corruption against Sabah CM, Dato Musa Aman in 2010. He is still at it as Sarawak Report tried to recycle the same allegation with embelishment.

On many occasions, Shafie have been undermining the state UMNO leadership in his relentless quest for the Sabah CM post.

The fake attempt to announced 15 branch heads resignation in Anifah Aman-led UMNO Kimanis Division but only 5 named is a fine example of his bad intention. One can expect him to pay some blokes to claim being members and announce resignation from Musa's UMNO Libaran Division.

Before the reaction to Shafie's suspension in Semporna, there was also 100 resignation at Dato Bung Mokhtar's UMNO Kinabatangan Division. It is as though Bung has lost confidence with Najib and now supporting him. Will there be large number of resignations from UMNO Batu Sapi? 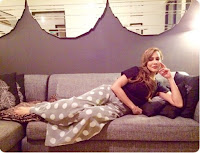 Zahida denied being married to him and at one time, announced engagement with an unknown businessman to cover-up for Shafie. Till today, there have been no wedding.

When will Shafie make an honest lady out her?

His alleged affair ties to an expose by PKR's Zuraidah. Zahida's driver admitted regularly banking in  sizeable amount of money. The source is dubious because she had neither done much movie and  drama nor modelling.

Zahida claim she is a businesswoman and in partnership with her brother-in-law. Honey! This school dropout ain't no businesswoman. The businessman acumen of dyed dumb brunette is doubtful. What business is she in?

Zahida was also sued for defamation and lost in court.

His "marriage" or  "not marriage" life may be deemed private as much it is his prerogative to not be open and admit to his marriage solemnised in London.

It is the transactions involving Zahida which is suspected to be linked to Shafie is in question. Shafie have been long been known to have abused his position as Minister to accumulate wealth through public work without delivering it.

The video below on Shafie's rural water fiascos:


In You Tube here are pipes installed by Shafie's boys but no water arranged to flow in.


The common excuse he used was the execution is done by Ministry official and he has nothing to do with it. But the problem is, it involves his men or cronies. 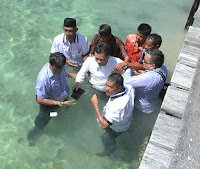 This is not an expose that is convenient on a fallen leader.

There is nothing hyenic because this blog had done so long before all this. It was advocated that he should have been the VP to be knocked off to be replaced with other leaders.

There is also alleged wrongdoing involving MARA Inc. being investigated by MACC. At one time, one of his officer was charged for corruption.

Finally, one leader such as Shafie is out. His emotional resignation accepted by Secretary-General Tengku Dato Adnan Tengku Mansor.

Comments by Dato Abdul Rahman Dahlan is profound and hit it right at the spot. He said his resignation is expected and was quoted by FMT saying:


“Semporna Umno is still functioning and will be strengthened with a stronger line of leadership who care about the people’s interests.” 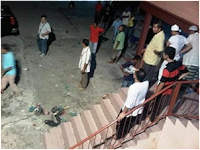 Political blogger, The Flying Kick described what he saw in Semporna:

Shafie's political strength in Semporna is based on leaving the people impoverished and dependent on the pittance of donation from him.

The Sabah leaders commenting are those in Semenanjung. In Sabah, leaders hardly bat an eye lid to Shafie's resignation. Dato Salleh Said Keruak was quoted by FMT below:


“His quitting the party does not undermine the strength of Sabah Umno because the majority of members support the party’s struggle and not individuals.

Where will Shafie go? 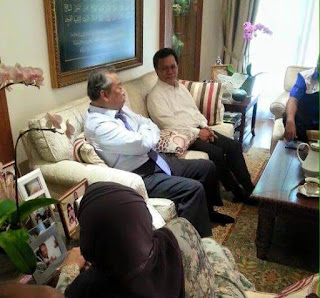 Although one minor PAN leader suggested Tan Sri Muhyiddin should be heading the party, it was doused with a denial by Khalid Samad. One guess is he will likely join Ikatan which have an alliance with PAS and is more strategic and have some level of consistency with his politics.

Mukhriz needs hand holding all the time thus is expected to go wherever his daddy consent and most likely wherever Muhyiddin goes.

Shafie cannot do so unless he intend to move his politics to Semenanjung which is most unlikely. So he will need a platform which could catapult him and it is likely to be USNO. There have been attempt to re-register USNO but still not approved by ROS.

Instantly, Shafie can get all 5,000 of his diehard "Projek IC" supporters in Semporna as member and the planned USNO can have one seat already. He already paid them "duit raya" to his Projek IC supporters to create the fake wave of support at his resignation announcement.

Did you watch the video?
Those people weren't paid supporters.

Something about bajau laut below:

They sould more suluk or more accurately tausug to me