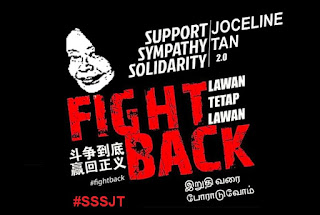 Before pursuing the subject of this posting. we like to express support for Joceline Tan as expressed by bloggers such as Bujai, Helen Ang, etc.

Though the basis of Lim Guan Eng's lawsuit is wrong allegation, he could have just denied and put up a rebuttal. His intention is to block The Star from writing anything negative about him.

And, to cover up on his biggest fear that was mentioned in the third last para below:


Stories about a Penang-born fund manager based in Hong Kong and his links with Penang politicians have also begun to circulate in a way that seem to point to something big in the making.

Heard of it for a year already and hinted in this blog.

If only the law enforcement people can piece it together and investigate. Obviously detractors did not read the fine print and if they did, they would not have known. Yet Tony Pua was talking away without realising it. Opps hint hint ....

It is just an example of how issues raised against government can politically be turned around. It is better to be factual, righteous and if possible, pragmatic.

Same in the case with the new political party announced by Tun M. 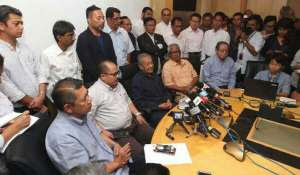 In Rocky Bru's latest posting "If Mahathir was my father ...", he highlighted Life of Annie's posting to ask "Dr Mahathir should rest.". That would have been what his children like Dato Marina and Tan Sri Mokhzani would have wanted.

Whatever issue he raised, it will only be turned around against him. Only the opposition, if there is any and they can get their act together, could benefit from this exercise. Does the opposition has the agenda to lead and develop the country?

As far as Mahathir's new party, it is launched after the launched Citizens' Declaration fizzled out within 3 months. If t is only a new story to keep things burning till GE 14, it does not stand a chance on paper.

Firstly, it is not easy for Malay voters to bite the fact that Mahathir is on the same pedestal with DAP. So it serve to only split UMNO supporters vote and help opposition.

While Dato Nazri Aziz put down the new party as to show Mahathir is not accepted by the opposition parties, RPK theorise that Mahathir is looking at another alternative to take control within PKR. There will then be a clash between Wan Azizah and Azmin.

Anwar may have said it is positive development and he accept Muhyiddin's leadership role, but Azizah and the other Pakatan Harapan party members are still on a look-see basis.

One reason is to see what Mahathir is up to. At the back of their mind, Mahathir could be doing BN's bidding to divide opposition from within.

Secondly, both PKR and DAP has internal issues.

Three, PAN is hot in the pan. It has the political brains and operatives but it is too dependent on DAP.

Four, NGOs too want to see the reform agenda. Mahathir will have to foresake his Malay agenda in whch he has been silence on it.

He and Muhyiddin will need to do a makeover to become an Islam Liberal like Marina. He had approached the G25 and held a anti-hadith forrum at Yayasan Kepimpinan Perdana..

Five, can the new party command as much wakil rakyat as UMNO in the current BN formula? What sort of quality and depth are the members of the new party? 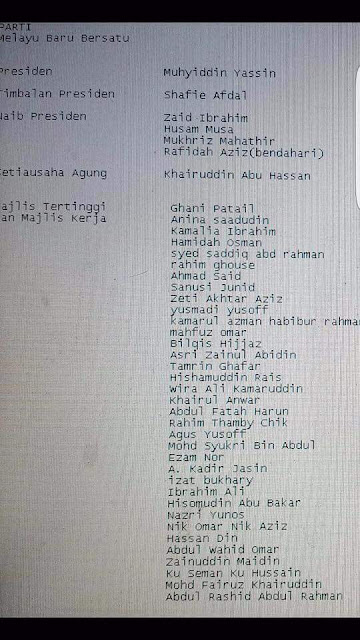 Will it be as per the above?

With AWO, Zeti and Gani Patail in, this black op list does not make sense. However, each name has it's own unique stories and issue.

RPK credited to Outsyed The Box. The pro-toon are accusing a blogger. It seemed his style but not likely to be him. He does not have the information to know each of the person in the list.

It brings us to the last reason the "opposition" are on a look-see. Can the new "Melayu Baru Bersatu" deliver their financial strength and money from runaway UMNO proxies and corporate cronies?

RPK put the figure at RM2 billion and we heard of such figure long before it came out in Malaysia Today. Unverified source claim Muhyiddin liquidated his "investments" and raised RM300 million. Even Shafie has a war chest of RM1 billion for Sabah and seeking to buy over small warlords.

Otherwise, there maybe a no go.

So the Protoon cybertroopers and Kelab Che Det should discard the notion they are doing a perjuangan dan pengeorbanan. They are no better than Shafie's Suluk supporters.

Can Muhyiddin provide the leadership? 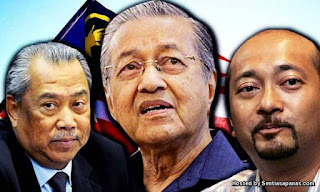 Most important in any political campaign is content and in particular plan.

Muhyiddin was reported to be exploring consensus among opposition. He knows and everyone in UMNO knows that after so many opposition failures, the only workable formula is to be create a new improve Barisan Nasional.

It would be good if Muhyiddin could do so. BN would be helpless to respond. Finally, Malay interest can be safeguarded by opposition, whatever that means in today's globalised world.

New party, Pakatan Harapan and potpouri of NGOs could undertake a "Coordinated Collective-action Front". They could even emulate the social trend underlying Brexit and Donald Trump's Make America Great Again.

However, opposition have a more positive and open attitude. A pro-UMNO blogger like us have better access to opposition leaders than UMNO leaders. So guys, we are not bullshiting and plucking stories from the sky.

Do not discount Muhyiddin.

As for Mukhriz, let us put in short and sweet for our friend, still is as far we see, dunno whether he is still manly enough to agree to disagree.

Mukhriz has to be focus and serious. If he wants to be family man first, forget about politics. His heart must be in it. He must enjoy it. It must not be about pleasing his father. If he wants to be a leader act like one. Stop being a bridegroom.

As for Shafie. tak payahlah buang masa. This we blame on Mukhriz and Hishamuddin for not taking him down.

He is morally corrupt leader. It has a slightly different practical meaning. People tend to think of corruption as per the Malay proverb, panjang tangan (or long hand). Almost all politicians have a tendency to abuse public fund for their political funding.

We have written on Shafie since he was on top of his game in UMNO. Leaders whose politics is based on keeping his people impovershed and dependent on his dedak should be a priority to be removed. True it is dedak ... only RM10-30.

Anyway something leaked on Shafie. Quick check say there is some truth. THE MMOF officer mentioned have been mentioned before here.

Read this message spreading on the social media on Shafie: 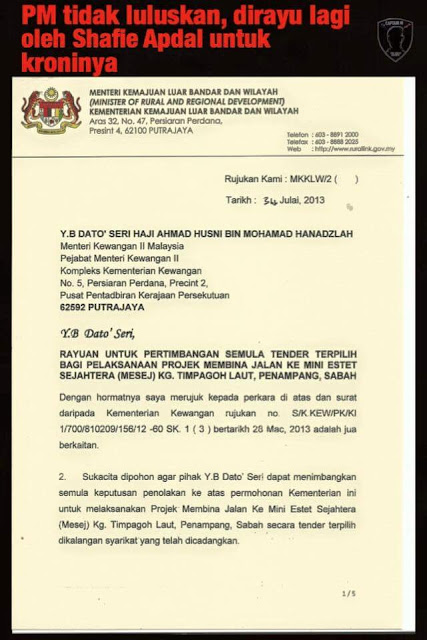 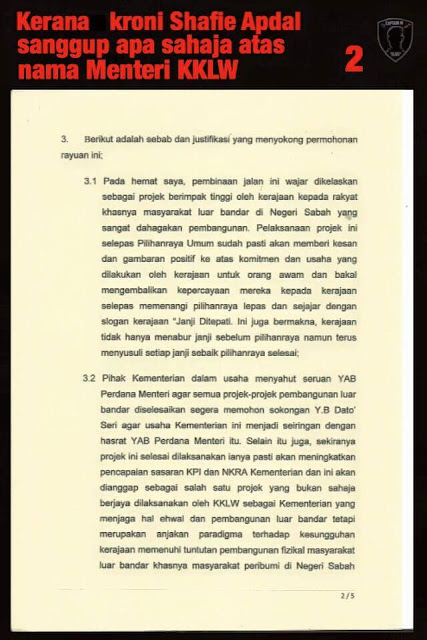 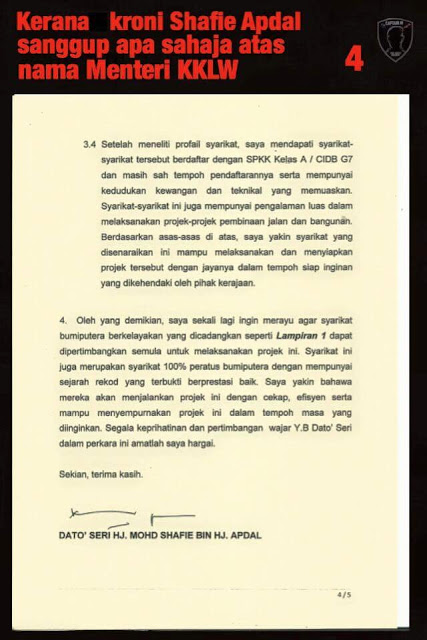 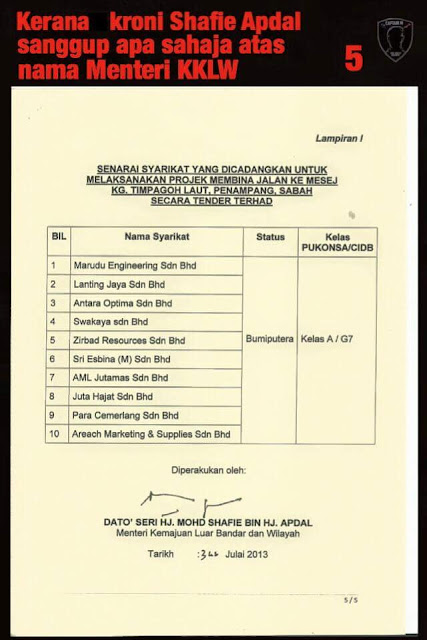 Wonder who is Captain M.

If it had been Dr M, it would have been easy to assume someone trying to blame it on Mahathir. There will be those to ignore the Captain and speculate M could be Musa Aman, Shafie's nemesis in Sabah.

Maybe someone is passing the blame on Musa Aman for his or her benefit. Who will that third party or dark horse be?

As far as the leadership of the new party, Rocky summarised it well:

Muhyiddin Yassin may lead the new party initially but I don't see him leading it into the next general election; the former Deputy Prime Minister is quite the spent force and does not even command a fraction of his home state Johor. Similarly, Shafie Afdal, the ex Umno VP, has no influence in Sabah outside his own kawasan. Mukhriz will have more luck, being young and being a Mahathir, but then again he's nothing like his father.

Maybe Rocky is right. Should just give it to Ibrahim Ali. Only thing is he has other plans since Nik Abduh turned out to be a failure in Pasir Mas.

Don't worry your head about Tun M & his new party.
Take care of UMNO so that no exodus of 3 million members
leave umno to join Tun Mahadir.
Remember, seekor ayam sekarang berharaga rm35..00.
Housewives may not understand 1MDB, but when the family
cannot eat fry chicken, u beware, OK.

Why the fuss about the new party TDM wants to form?. If you think UMNO and the components are strong stop talking about the new party.Face it when the time come. To me it is simple- takut kerana benar. TDM still has many supporters out there and he commands respect.. Not like NR- too many baggage to carry. The people around him are useless. All they can do is carry his bags. What happen in Turkey may not happen here but come PRU 14 we can see a new Malaysia. many questions are not answered. Too many if and when. No light at the end of thr tunnel with this bunch of ministers. They will follow what the man say. Never say no is the motto "if" you want to survive.