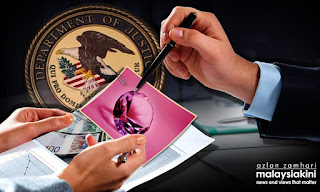 There is strong believe that DOJ could not proceed in the earlier application using Kleptocracy Asset Recovery Initiative (KARI) due to in less revealing term, limitation on evidence.

The latest attempt to touch and highlight the pink diamond and accused it as gift to Datin Seri Rosmah had a local touch to a link to past issue with diamond from Jacob & Co, New York that was merely addressed to her for the mother to her Kazakhtan son-in-law.

A staunch former reporter turned blogger, Apanama defended Rosmah vehemently then though he has removed the posting. (See Rocky Bru in 2011 here.) Sadly he is no more keen now for the truth.

There is likely no link between Rosmah and the pick diamond. Read LSS via Snapshot 2016 here and Jalil Ab Backer on MyKMU here.

Back to Malaysiakini, the FMT report below with underlined highlights:


DoJ says its court filings based on reasonable facts

It warns, though, that people should not conclude that those named in its documents are guilty, or even innocent. 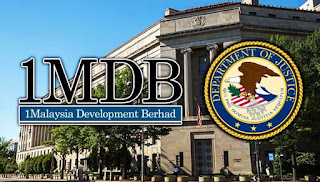 KUALA LUMPUR: The United States Department of Justice (DoJ) said whatever information it has released regarding its 1Malaysia Development Bhd civil lawsuits are based on details that it believes can be upheld in court.

However, it also cautioned that one should not draw any conclusions about the guilt or innocence of anyone simply because they had been named in the documents.

The DoJ told Malaysiakini via email: “The law requires we allege sufficiently detailed facts to establish a reasonable belief that we will prevail at trial.

“This means we have to allege enough facts to show a reasonable belief that United States money laundering and other criminal laws were violated and that the subject assets were involved in or traceable to these illegal transactions.

“In addition, the complaint provides sufficient details to specifically identify the property subject to forfeiture and to clarify the basis of the government’s case should anyone with a valid claim wish to challenge our case. Identifying persons and entities aids that function.”

Malaysiakini said the DoJ was responding to the statement by Minister in the Prime Minister’s Department Abdul Rahman Dahlan that the DoJ had insinuated at Rosmah Mansor, the prime minister’s wife, by linking her to diamonds allegedly bought using cash misappropriated from 1MDB, even though it had no intention to seize the jewellery.

The DoJ added: “No conclusions should be drawn, one way or another, about the status of individuals or entities simply because they are named in the documents.”

Read the rest of the background part of the report here and also in DOJ website here.

The following phrase highlighted that it is based on the information provided by the complainant:


“In addition, the complaint provides sufficient details to specifically identify the property subject to forfeiture and to clarify the basis of the government’s case should anyone with a valid claim wish to challenge our case. Identifying persons and entities aids that function.”

Will that mean DOJ filing is based on hearsay and it is a case of "sue first, fight it out in court" to see what happen?

Another point to be highlighted is:


It is not beyond reasonable doubt required in criminal cases!

Lawyer Yuktes Viyay highlighted this issue with the American law in his FB here.

Just like Ms "I-am-willing-to-be-US-spy" Cynthia Gabriel did with the Scorpene issue to hype French court investigation as Najib was going to be charged but it never did happen, the same could happen.

It could be just Mahathir making allegations but later, it will not go any further should Najib be successfully toppled. He has done it on ECM Libra in 2003-2008 where he did not pursue it any further upon toppling Pak Lah.

There is a believe that Mahathir told former UMNO members in PPBM that the party is only temporary and it will be dissolved upon Najib's removal. PPBM will then return back to UMNO.

The genuine opposition parties could be taken for a ride and the innocent non political PPBM members being used ha ha ha ....

The stories in the application by DOJ closely resemble Clare Brown's Sarawak Report and Clare depended on funding from George Soros.

This time she could be funded by Mahathir and Soros extend his international media network: 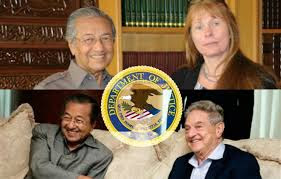 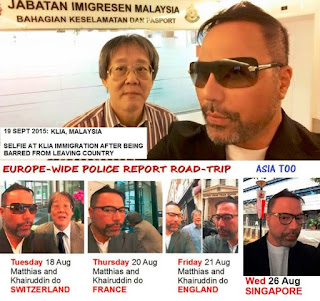 Both of them went on a roadshow as though hey had reported to all authorities in the world but it is only a few and merely photo ops.

This blog raised it for the past 2 years. 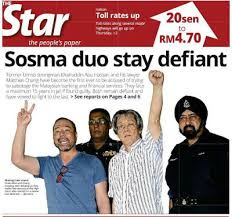 The government is not wrong to charge and detain them. Only it did not stick with the judges. Time will tell and this blog has written on it many times over the last two years.

When it is time to show proof, both Mahathir and DOJ have none. Case will be thrown out and Khairuddin will die standing.

It will be too late for him to realise that he was used. When the time comes, he will be discarded like a kain buruk after the shine on the cloth worn off.

He and his family is too kedekut to spend his own money to care for the supporters that sacrificed for him. They usually argue: "You join and support me at your own accord. I did not ask you to join me". Only do political rallies.

Been there, know that.

When it comes to lying and sabotaging the country to collaborate with enemies of the state for personal interest and greed, it has to stop. The sacrifice is not worthy!

So, are you claiming that the DOJ was "manipulated" into this?

And that this "manipulation" carried over from the Obama DOJ to the Trump DOJ?

That's quite a stretch, even for you!

So, who is going to "Bell the cat"? You or someone else?

Why the unholy rush to work up a frenzy when the civil suit hasn't even been heard in court yet!

Are you trying to "preempt" the US justice system?

And who is funding your "extensive" research into this "manipulation"?

Which main stream newspaper in Malaysia dares print the truth? UMNOputras are still in denial about 1MDB...even with Najib's stepson so besotten with that Aussie model he gave her US$4.5 million or something in jewels. I will not be lewd so I will not say what he expected or got in return.

Where did he get the money from? Any Malaysian mainstream newspaper brave enough to research to do a serious article like that journalists in the West? I will not hold my breath.

It is up to not agree on my writing and comments but you are in no way capable to judge negatively my true and sincere intention.

I will answer to god but not to gullible human